Report: Iran’s Doomsday Clock on Israel Shuts Down Due to Electricity Shortage 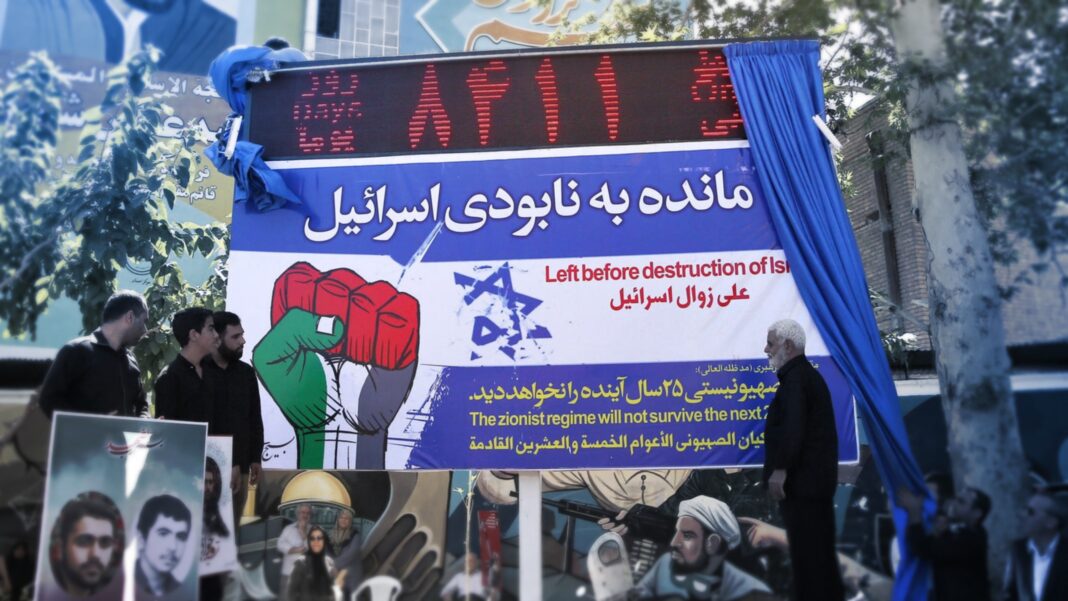 Iran’s doomsday clock counting down the days until Israel’s destruction has reportedly shut down due to electricity shortages that are the result of Trump-era economic sanctions and mismanagement by the country’s theocratic regime.

A clock was unveiled at an anti-Israel rally in June 2017 attended by “moderate” President Hassan Rouhani as part of annual “Quds Day” observations, during the final days of Ramadan. The clock picked a remarkably specific timeline for Israel’s destruction: 8,411 days, roughly 23 years, fulfilling a 2015 prediction by the country’s top leader, Ali Khamenei.

The UK Independent reported at the time that crowds chanted anti-Israel slogans and burned Israeli and U.S. flags.

Now, apparently, the clock has stopped, thanks to nationwide power shortages, according to journalist Assad Hanna.

Israelis took to mocking the clock on social media:

It is unclear whether the specific clock unveiled in 2017 is the same device as the clock displayed at a roadside, above.

President Joe Biden is seeking to entice Iran to rejoin the 2015 nuclear deal that then-President Barack Obama agreed to join in the months shortly after that clock was unveiled.

Biden is offering the prospects of sanctions relief to the regime, though there has been little progress in indirect talks.

Although this piece of news is quite humorous, it begs the very serious question: Why is Iran so “hell-bent” on Israel’s destruction? It is only by understanding provided by the Bible that one can answer this perplexing question.

Anne Graham Lotz recently described the true nature of the conflict between the Jewish State and the surrounding Arab nations:

The conflict in Israel goes back millennia. In Genesis chapter 12, after God told Abraham of Ur to leave the Chaldees, He led him into Canaan. At the end of chapter 13, He says to Abraham, “Lift up your eyes from where you are and look north and south and east and west. All that you see I will give to your offspring forever” (see Genesis 13:14-15).

That commitment that God made to Abraham was confirmed with the covenant [to be the father of many nations]. (See Genesis 17:1-8.) It was confirmed repeatedly throughout Israel’s history. And she’s had a rough history.

In 1917, the Jews began trickling back to their covenant land, and in 1948, there were enough of them that they were declared a nation by the United Nations. America was the first to recognize her. Her neighbors went to war to try to move her out, but she won that war.

They tried it again in 1967, and in six days, she won that war and this time was able to exercise sovereignty over the city of Jerusalem.

There’s been conflict since. Certainly it’s physical and it’s historical, but it’s also a spiritual conflict because the descendants of Abraham are the Jews, but the descendants of Abraham are also the Arabs. The Jews descended through Isaac, Abraham’s son, and the Arabs descended through Ishmael, Abraham’s son. So they’re cousins.

God promised Israel—Jacob and his sons—the land, and He also gave land to the descendants of Ishmael, which is a lot of what we see in the Arab world. They’ve got a lot of oil under their land. He blessed them, but the covenant nation belongs to Israel. God is the one who ordained that.

Yet there’s a wicked agenda, the leadership of Hamas and Hezbollah and in the Gaza strip and Iran and Syria. They don’t want to live with Israel. They want to destroy her. They want to push her into the sea.

I think it goes back to an anti-Semitic core and that fight that began when Isaac was born with his older brother Ishmael. There is wounding on both sides. … It’s a cycle. Unless you break the cycle, it’s self-perpetuating. What we’re seeing are the wounds between Isaac and Ishmael that have ricocheted throughout the centuries.

Bottom line, God gave the land to Israel and her neighbors are not accepting.

It is also worth noting that countries like Iran, according to God’s Word, will never succeed in their quest to destroy Israel. In Ezekiel 38-39, the Bible speaks of a future war in which Russia, Iran, Turkey, and others, will attack the Jewish State. The alliance of countries will attempt to invade Israel from the north, which will result in God’s direct intervention.