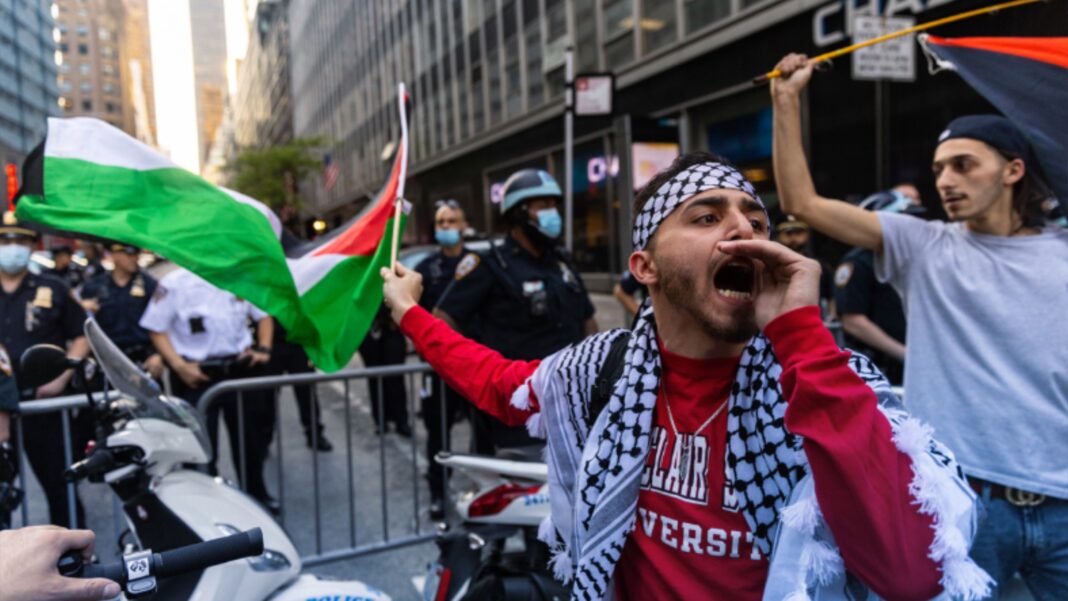 Pro-Palestinian demonstrators were filmed Thursday as they attacked Jews in Manhattan — allegedly harassing and beating pro-Israel counter-demonstrators; shooting fireworks at a crowd of onlookers; and spitting on diners eating in a local restaurant.

Some of the violence appeared to be mutual, as fights broke out between the two sides, facing off in Times Square. However, the pro-Palestinian demonstrators appeared to instigate and escalate the violence. One group (above) burned an Israeli flag.

Former New York State Assemblyman Dov Hikind, a pro-Israel Democrat who is also the founder of Americans Against Antisemitism, documented the violence, as did several citizen journalists who witnessed the violence as it unfolded.

Videos of other attacks emerged, including one of a large group of pro-Palestinian demonstrators spitting at restaurant patrons, filmed by a correspondent for the conservative news website American Pigeon:

Some videos appeared to show fights between pro-Israel and pro-Palestinian demonstrators. According to reports on social media, police eventually dispersed the latter, who appeared to be more numerous.

Pro-Israel and pro-Palestine protesters clashed and fireworks sent people running near Times Square Thursday as tensions in the region spilled into the streets of Manhattan, videos showed.

A small explosive was thrown from a pickup truck in the Diamond District on 47th Street, sending worried bystanders running for safety. The pickup truck was part of a convoy of vehicles waving Palestinian flags, sources said.

A 55-year-old woman sustained burn injuries to her lower back.

The Diamond District is a predominantly Jewish area of the borough, with many kosher restaurants.

The Post noted, ironically, that the violence broke out after news of a ceasefire between Israel and Palestinian Hamas terrorists emerged.

Several commentators on social media noted the lack of outrage, and the silence from the mainstream media and politicians.