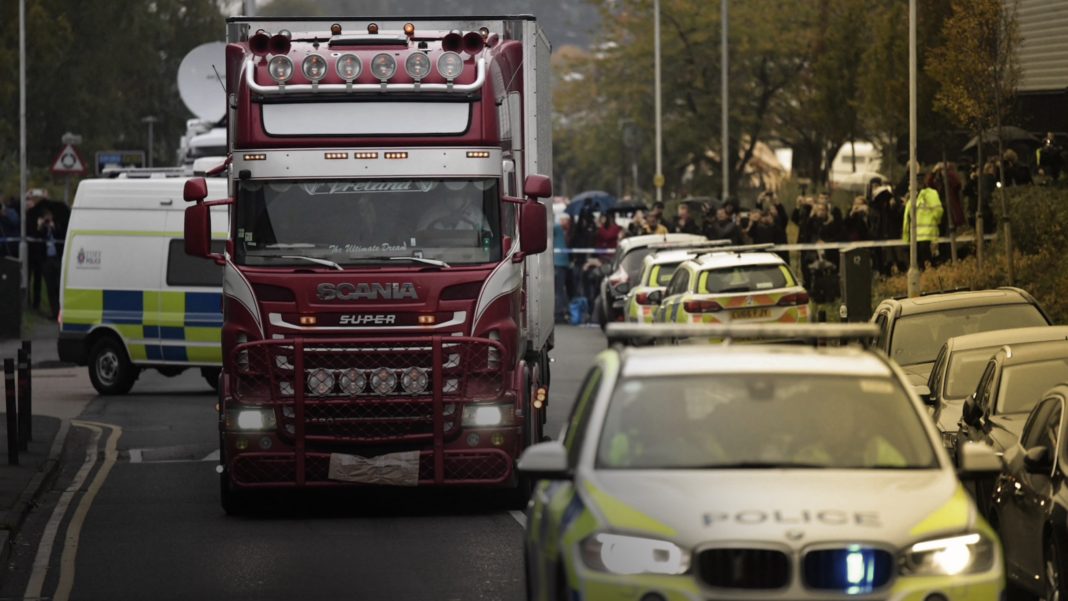 Police are investigating a suspected Irish people-smuggling ring after 39 migrants were found frozen to death in the back of a refrigerated lorry.

One of UK’s biggest murder inquiries was launched today after the bodies, including that of a teenager, were found dead in the truck on an Essex industrial estate.

The driver of the truck, named locally as Mo Robinson, 25, from County Armagh in Northern Ireland, was arrested on suspicion of murder.

Mr Robinson may have alerted the authorities himself, it emerged. Sources close to the investigation told the Telegraph that it is “very unlikely” that he knew about the plans to smuggle people across borders.

Temperatures in the refrigerated truck get as low as -25C and sources said the people are likely to have died from suspected hypothermia.

Boris Johnson, the Prime Minister, said the perpetrators of the crime “should be hunted down”.

Local MP Jackie Doyle-Price said that putting “39 people into a locked metal container shows a contempt for human life that is evil” and said that the best way to honour their memory was to bring the perpetrators to justice.

Priti Patel, the Home Secretary, described it as a “truly shocking incident” as she signalled she is willing to consider tougher sentences for human traffickers.

“What we have seen basically through the actions of these traffickers is the worst of humanity and it is right that we use our law enforcement and all aspects of the law through existing legislation to make sure that justice is served and that the perpetrators are prosecuted,” she told the House of Commons.

Police were on Wednesday night probing the links to Bulgaria as it emerged that the truck’s cab had been registered there in 2017.

The country’s foreign ministry said it had been registered in the city of Varna under the name of a company owned by an Irish woman and had not returned since 2017.

The area is a cigarette and fuel smuggling route which is known locally to have links to Irish Republican gangs.