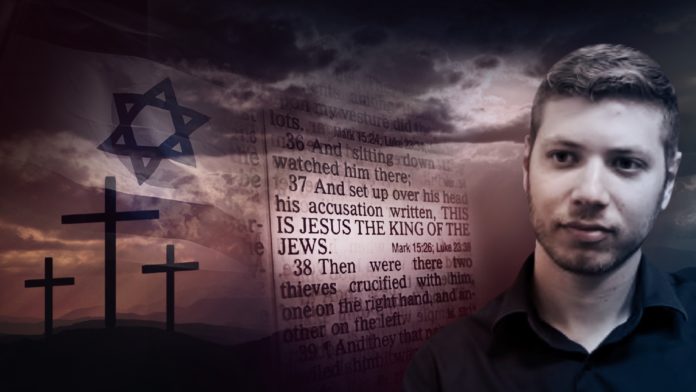 During what appeared to be a rather long Twitter discussion on Jesus’ ethnicity, Linda Sarsour, who has made a name for herself promoting an Islamist agenda in American politics, insisted that “Jesus was Palestinian of Nazareth and is described in the Quran as being brown copper skinned with wooly hair.”

It was similar to the ludicrous pronouncements of Palestinian Authority leaders every Christmas that Jesus was the “first Palestinian freedom fighter,” the term they use to describe what the rest of us call “terrorists.”

Yair Netanyahu was having none of it.

“Are you that stupid?” he asked Sarsour, explaining to her that “on the cross above Jesus’ head was the sign ‘INRI’- ‘Iesvs Nazarenvs Rex Ivdaeorvm’, which means in Latin- Jesus of Nazareth king of the Jews!”

In other words, the Romans, who ruled the region at that time, pretty clearly recorded that what was to become known as the “Holy Land” was home to the Jewish people. The Romans make absolutely no mention of any “Palestinians,” though they did later rename the region to Paleastina to taunt the Jews by referencing their biblical arch-enemies, the Philistines.

Even more interesting in regards to the young Netanyahu’s post is that he informs Sarsour that we know these things because they are recorded in “the Bible.” Jews don’t typically consider the New Testament to be part of the Bible.

But, according to Yair, “The Bible says that Jesus was born and raised in Judea!” (emphasis mine)

Mainstream Israeli newspapers have also taken up the fight to protect the Jewishness of Jesus in response to the maddening claim that Jesus was a Palestinian. Numerous Hebrew-language articles are being published around the country defending the fact that Jesus was in every way a Jew, and even an important figure in Jewish history.

What Sarsour and her ilk intended for evil has turned into a blessing for the Jewish state.