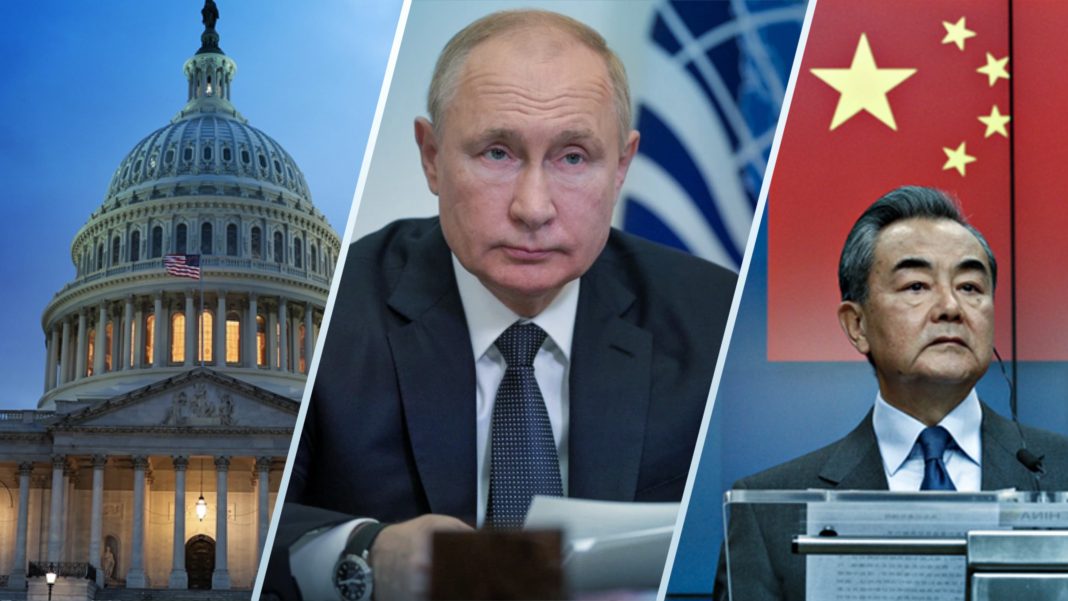 Two major stories led me to record a Breaking News Update on Tuesday. First, due to the protest of Democrat woke liberal congressmen, the long-standing emergency aid for Israel’s Iron Dome defense system was removed from the U.S. budget. This is directly contrary to what the President told Israeli Prime Minister Naftali Bennett just a couple weeks ago. The Iron Dome is often the only protection that Israel has from the thousands of rockets and missiles that come across the border from Gaza, Syria, and Lebanon. This also comes one week after the U.S. pulled its Patriot missiles from Saudi Arabia, despite the consistent attacks the Saudis are receiving from the Houthis.

The second major story was that a Chinese delegation was recently spotted at Bagram airbase in Afghanistan. It seems that the Chinese want to set up an intelligence “facility” in collaboration with the Taliban and Pakistan keeping an eye out for any support to Uyghur Muslims of Xinjian province in China, say sources.

Speaking of Bagram, the suicide bomber who killed 13 U.S. soldiers and 169 Afghan civilians had been turned over to the CIA and held at Bagram prison for four years following a plot to stage suicide bombings in New Delhi, India. On August 15, during the U.S. pullout, he walked free with thousands of other terrorists. Eleven days later, he took over 180 lives.

John Kirby, spokesman for the Pentagon, said that the U.S. used a drone to kill a senior al-Qaeda leader near Idlib, Syria. US CENTCOM confirmed the attack. While they are withholding the name, other sources claim that there were actually two terrorists killed – Abu Hamza al-Yamani and Abu Bara al-Tunisi. Although they are not officially part of al-Qaeda, their group Hurras al-Deen is very closely tied to the terrorist organization.

Iran had some bold words for Israel Wednesday. Iranian parliament speaker Mohammad Baqer Qalibaf said, “the Israeli was supposed to be able to approach our front line in Iraqi Jalula, a kilometer from our border. But today he fears our presence in the Golan a few kilometers from its borders…. He wanted to conquer Tehran, and now he is in this situation…. It proves the greatness of the Islamic Revolution.” The threat is real and fits directly into an Ezekiel 38 framework.

In its quest to find sources of revenue, Iran has invested heavily into the mining of Bitcoin. While prohibiting its citizens from trading Bitcoin internationally, the Central Bank has opened its doors to any of the cryptocurrency generated. It is estimated that 4.5% of the world’s Bitcoin mining is now taking place in Iran and could be bringing in revenues in excess of $1 billion per year.

The nuclear talks in Vienna will resume sometime in the coming weeks. That should give Tehran plenty of time to enrich what’s needed to go nuclear, then hide it all and pretend like there is nothing to see.

New Iranian President Ebrahim Raisi met last Friday with Armenian Prime Minister Nikol Pashinyan at a summit in Tajikistan to discuss ways to open more trade between the two countries. Right now, truck transportation between the nations is getting bogged down on a 21-km stretch of highway controlled by Azerbaijan, because the Azerbaijani authorities accuse Iran of illegally shipping cargo to the controversial area of Nagorno-Karabakh. While at the summit, Raisi also met with Tajikistan President Emomalil Rahmon in order to strengthen their ties. Raisi stated, “A new chapter in the relations between the two countries is taking place and I hope this visit will be a turning point in Tehran-Dushanbe relations and cooperation.” More and more countries these days are feeling free to deepen their ties to Iran.

In response to the previously mentioned truck issues with Azerbaijan, Iran held military exercises along the Aras River that separates the two countries. Azerbaijan was once part of Iran, but was split off 200 years ago by Russia. Iran has given an ultimatum for the Azerbaijanis to immediately release several truck drivers they are holding or face the consequences.

Finally in Iranian news, more details on the assassination of Mohsen Fakhrizadeh, the father of Iran’s nuclear program, have been surfaced by the excellent reporting of Ronen Bergman and Farnaz Fassihi. On November 27, 2020, using artificial intelligence, satellite technology, and a high-powered machine gun, the Israeli Mossad took out this man most responsible for bringing Iran this close to becoming a nuclear-armed country. This targeted killing will be a key element in my second Nir Tavor thriller coming out next year.

President Vladimir Putin made very clear Russia’s policy toward terrorist regimes when he stated last Friday that his country needs to work with the Taliban. He also encouraged other nations to unfreeze Afghanistan’s assets.

In a completely opposite move, Discover Card cut their ties with the Alliance for Global Justice (AFGJ), a terror-linked organization. The AFGJ funds the Samidoun Palestinian Prisoner Solidarity Network, which in turn is tied to the Popular Front for the Liberation of Palestine (PFLP), an organization that Israel has designated a terror group.

It’s been a bad week for the French military industrial complex. Last Wednesday, Australia cancelled a $66 billion deal with France to purchase conventionally powered submarines just hours before they announced a new deal to buy nuclear-powered submarines from the United States. Soon after, Switzerland canceled their deal to purchase France’s Dassault Rafale fighters, opting instead for United States’ F-35 jets. A very angry Prime Minister Emmanuel Macron recalled the French ambassadors from both Washington and Canberra in protest of what France calls a “stab in the back”. Considering this is the first time that the French have ever recalled their ambassador from Washington, it brings up the question as to which U.S. president all the pundits said would create enemies for America of the European nations and which one would have them gathered together singing “Kumbaya”? Hmmmmm….

In Danail, in the eastern Bekaa Valley, Lebanese authorities seized 20 tons of ammonium nitrate. This is the chemical compound that caused the massive explosion last year in the port of Beirut that killed 214 people, wounded 6500 more, and caused in excess of $15 billion damage. The owners of the company holding the chemical said it was intended for agricultural use

There was a failed coup attempt Wednesday in Sudan. The Muslim brotherhood, supported by Qatar and Turkey, seem to be behind this failed effort. Remember that although Sudan is part of the Abraham Accords and has peaceful relations with Israel, eventually Turkey will succeed in toppling this government. That will prepare it to be one of the five nations who will attack Israel according to Ezekiel 38.

In the realm of signs of the times, earthquakes continue at a very high rate and sometimes in unusual places. Yesterday morning, a 5.9 magnitude quake hit southeast Australia collapsing walls in Melbourne. It was the strongest land temblor to hit the island continent since a 6.1 rocked the Northern Territory in 2016.

In Israel, the last of the six escaped prisoners were recaptured in the West Bank city of Jenin. Local Palestinians clashed with the Israeli troops as Ayham Nayef Kamamji and Munadel Yacoub Infeiat were taken back into custody, along with two others who are accused of aiding them.