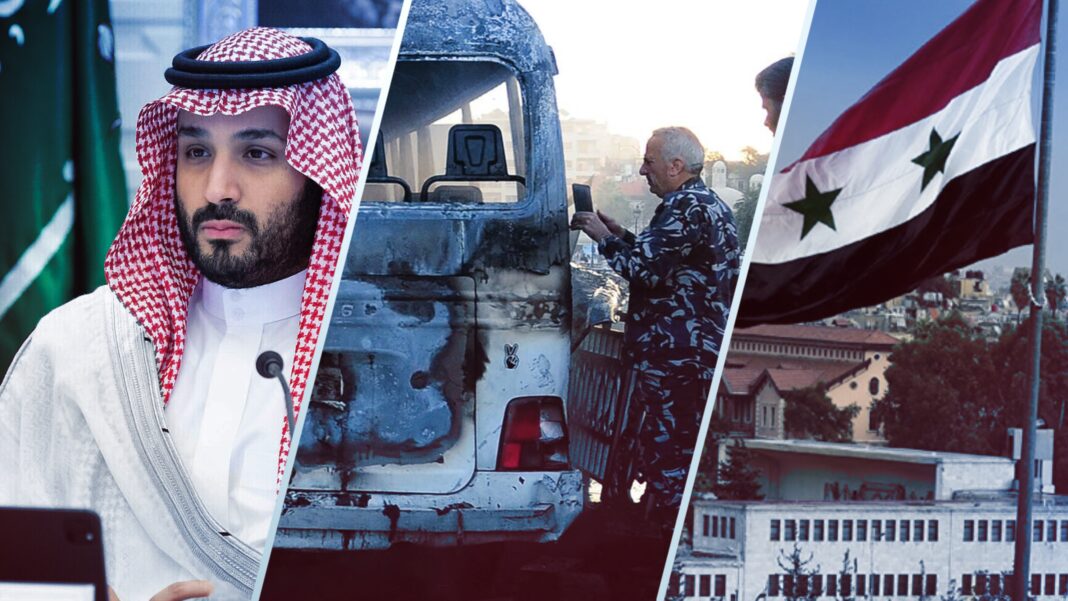 The Israeli Air Force (IAF) conducted a comprehensive airstrike in Syria overnight last Friday targeting several Iranian interests, including the T4 Airbase where Tehran has a strong presence. In addition to significant damage being dealt, at least three Syrian fighters were killed. A US base in southeastern Syria was targeted by Iranian suicide UAVs Wednesday in response to Israeli airstrikes in the region. No casualties occurred.

In more bad news for the Syrian military, an explosive device killed 13 soldiers riding in a bus near Damascus earlier this week, and an additional five soldiers belonging to Bashar al-Assad were killed the same day in an explosion in Hama.

Tehran also released images and the name of its new air defense system, Zubin. And Tehran’s terror proxy in Gaza, Hamas, sentenced two residents to death by hanging this week for allegedly collaborating with Israel. Furthermore, before too long, Iran and Turkey will acquire new fighter jets from Russia. As for one of Tehran’s other proxies, the Houthi rebels, a Saudi-led coalition began carrying out strikes targeting the group’s militants, which resulted in the deaths of over 150 rebels and several destroyed vehicles. If that’s not enough, more than 80 additional rebels were killed in a 24-hour period of airstrikes this week.

However, don’t think for a second that Tehran will deter from its agenda, as the Iranian Revolutionary Guard Corps (IRGC) now claims it has enhanced its military boats, increased its UAV supply, and has plans to equip its naval force with new cruise missiles that have a 2,000 km range and can reportedly hit objects in motion.

Following the Taliban’s takeover of Afghanistan, representatives travelled to Ankara, Turkey, to meet with the foreign ministry. This is simply another step for the terrorist organization to try to gain international legitimacy. However, Turkey ought to be focused on another serious concern, as its currency, the lira, continues to lose value against the dollar. It is now at a shocking nine liras to one US dollar.

Additionally, since the takeover, the Shiite minority in Afghanistan continues to be targeted by ISIS attacks, as a mosque in Kandahar filled with worshipers suffered multiple explosions last week, which resulted in the deaths of dozens of people.

As far as Islamic extremism is concerned, a conservative English Parliament member, David Amess, was stabbed to death by a Somali immigrant last weekend in broad daylight near London.

Adding to last week’s victory concerning the arrest of one of the Islamic State’s top financiers, the Iraqi prime minister announced a second arrest this week of one of the group’s terror masterminds.

Blue Flags 2021 is officially underway, wherein Israel and seven other countries are partaking in one of the most advanced aerial exercises to date. A flight dubbed “The Wings of History” took place in the early stages consisting of IAF and German military jets flying over Jerusalem. A German lieutenant general even toured Yad Vashem with an IAF commander upon arrival. The drill will continue until next Thursday.

Sadly, reports have surfaced that Israel’s government of change is discreetly changing its stance on the Iran nuclear deal. Former Prime Minister Benjamin Netanyahu’s uncompromising stance is now being jeopardized.

Earthquakes in the Mediterranean region continue to take place, as 6.3 and 6.7 magnitude earthquakes have occurred in the last week alone.

In what is perhaps some of the biggest news, the US is reportedly communicating with Saudi Arabia about the potential of the Saudis normalizing their diplomatic ties with Israel and joining the Abraham Accords. The Saudis apparently expressed willingness in September but also gave a list of requirements.

If you haven’t tuned in already, I encourage you to listen to the Middle East Update I gave Thursday concerning Iran’s nuclear situation and activity in the region.

What I’ve shared here is only the highlights of this nonstop region of the world. Please make sure to subscribe to my Telegram channel if you haven’t already and encourage others to do the same!