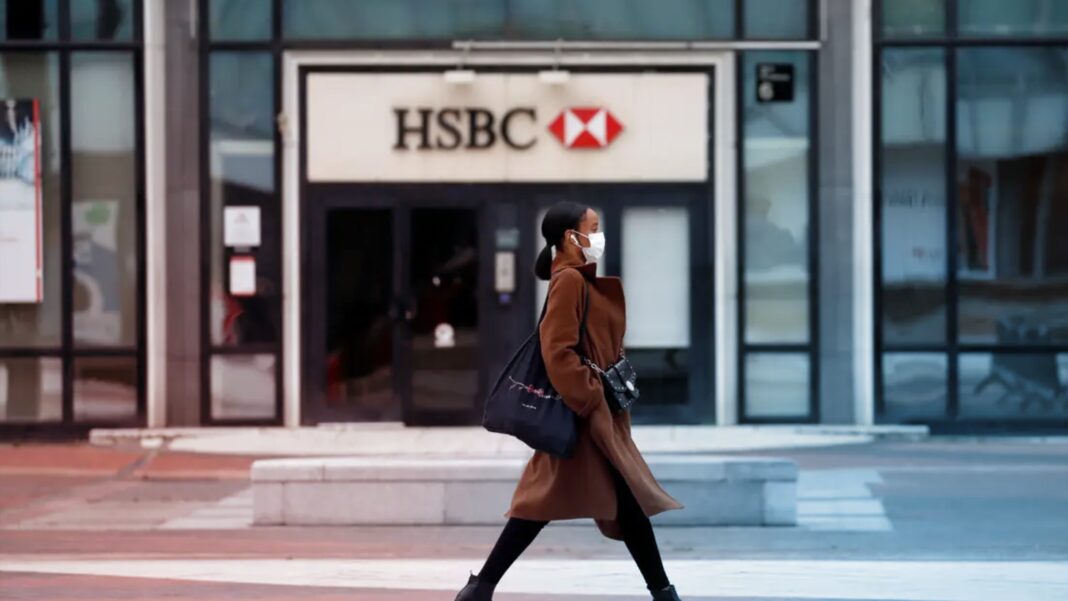 British bank HSBC has warned their customers that entering branches without wearing a face mask could result in the withdrawal of their accounts. Banks and building societies are among the places listed in the U.K. government’s COVID guidelines where, without a “reasonable excuse,” the public are bound by law to wear a face covering and social distance.

The police have already been given extraordinary powers to enforce the new guidelines, now being able to issue a £200 fine on the spot for failing to comply with the mask mandate, among other new rules. The fine will double for each subsequent “offence,” capping at £6,400.

A spokesman for HSBC, Jackie Uhi, told The Mirror that wearing face masks inside branches is essential, in accordance with government guidelines. Any customer who refuses to comply with this, as well as social distancing measures, will be denied service, with the possibility of having their account withdrawn.

“Sadly, some people are failing to protect themselves, our branch colleagues and other customers by refusing to wear a face covering inside our branches or observe social distancing,” Uhi said.

He urged customers to satisfy their banking needs online, wherever possible, asking whether they “need to visit the branch or could manage your banking from the safety of your home via our digital channels.”

“If you do visit us, please wear a face covering and maintain a safe distance from others. If individuals put themselves or our colleagues at risk, without a medical exemption, we reserve the right to withdraw their account.”

The bank did not suggest how they might enforce their newly ramped up “safety” measures. Current government guidelines state that certain individuals, like those with medical conditions or other impairments, are exempt from wearing face masks. The guidelines also stipulate that those who are exempt “do not routinely need to show any written evidence” of the nature of their exemption, and “do not need show an exemption card” for entry into a business.

“This means that you do not need to seek advice or request a letter from a medical professional about your reason for not wearing a face covering,” the guidelines continue. “Carrying an exemption card or badge is a personal choice and is not required by law.”

Competitors to HSBC, including Barclays, Santander, Lloyds Banking Group, and the NatWest Banking Group, confirmed that they will not be enforcing account closures “over face mask refusals alone,” The Sun reported. Barclays and TSB both added that account withdrawals could be enforced if customers become aggressive after being asked to don a mask.

Like HSBC, a number of major British supermarket chains are also stepping up their enforcement of face covering rules in-store. On Monday, David Potts, chief executive of grocery giant Morrisons, said that customers “who are offered a face covering and decline to wear one won’t be allowed to shop at Morrisons unless they are medically exempt.”

Tesco also weighed in, declaring in a statement that “we won’t let anyone into our stores who is not wearing a face covering, unless they are exempt in line with government guidance […] we will have additional security to help manage this.”

As with HSBC, the supermarket chains did not state how they intend to discern those with exemptions from those without. Already there has been some fallout, with shoppers taking to Twitter to note their consternation at being refused entry, despite qualifying for mask exemption under current government legislation.

One such customer said she was “humiliated” at her local Morrisons store. Even after displaying her mask exemption card, the store employee responded, “no mask no entry.”

A second person tweeted that her friend, also mask-exempt, was “verbally abused by other shoppers” after being stopped at the door without a face mask on.

The ramping up of mask enforcement is alleged to “keep customers and colleagues safe” in stores, a spokeswoman for Sainsbury’s said. But the data doesn’t support the claim that masks protect against the spread of COVID-19, according to America’s Frontline Doctors (AFLD), an organization of “diverse, exceedingly well-credentialed” physicians.

“The facts are not in dispute: masks are completely irrelevant to blocking the SARS-CoV-2 virus,” AFLD founder Dr. Simone Gold confirmed at the White Coat Summit in Washington, D.C., last autumn.

Commenting on the science of masking against viruses, Gold said that “prior to masks becoming political in March 2020, there was never even an attempt at a pretense that masks, let alone bandanas, stop a virus. It’s a complete fabrication. A virus is 1/1000 the size of a hair.”