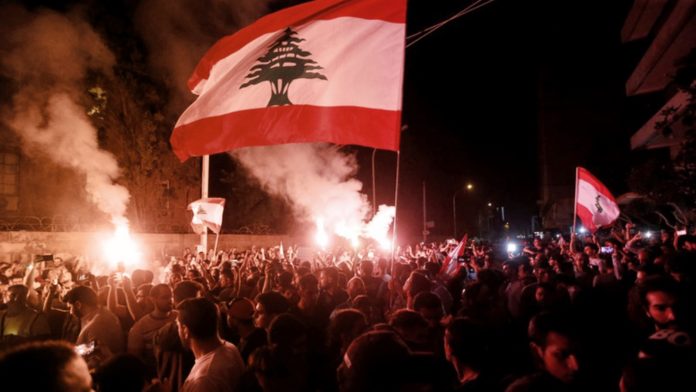 Tensions have escalated sharply among demonstrators in Lebanon over the past day, sparked by President Michel Aoun’s “arrogant” statements during a TV interview and the killing of Alaa Abu Fakher, a protester who was shot by the army in the town of Khalde, just south of Beirut.

In the wake of rising opposition, a large army presence was deployed along the main road to the presidential palace, where demonstrators gathered under tight security after burning tires to block roads linking Beirut with outlying areas of the country. The protests have paralyzed the country for the second day in a row, closing nearly all institutions, both public and private.

“The president urged anyone who doesn’t like the situation in Lebanon to emigrate, which angered people and sent them back into the streets. His answers to questions were a lot of words and no action,” Abd Joumaa, a Lebanese protester in Beirut area told The Media Line. He added, “We were waiting for him to announce actions, such as a date for the parliamentary consultations required to form a new government. We are sick and tired of the people in power and everything they do.

”President Aoun’s media department later explained that the president did not mean anyone with complaints about the government should emigrate. Rather, he only meant that those who reject all authority from any human being should leave the country.

Joumaa said that Lebanon’s government was confusing the people by reviving discussion on laws that currently aren’t high priority. “Parliament held a session yesterday to discuss the general amnesty law that concerns suspects who are awaiting trial, but the president canceled it for security reasons.”

These “security reasons,” Joumaa said, were plans by the protesters to shut down the house of parliament. “We were planning since Monday morning to close it down – not that we oppose the law, but we demand public justice, which is more important.”

Joumaa said that initially protesters weren’t demanding the overthrow of the government but improved living conditions. “However, the government in its current form represents what is wrong with this country.”

Alaa Abu Fakher, Joumaa said, was killed while closing the roads in Khalde, after a heated argument with the driver of a car who wanted to pass.

The army said in a statement that a soldier opened fire to disperse the crowd after an altercation, hitting Abu Fakher, who was identified as a local Progressive Socialist Party official and a member of the Choueifat municipality. Following the shooting, the soldier who opened fire was arrested and an investigation into the matter was opened.

Raneem al-Ahmar, a Lebanese protester, told The Media Line that Abu Fakher honored the revolution and died for his country, and that he acted not for sectarian reasons – not for a particular sect or party – but for the sake of Lebanon. “The people will stand with his family,” she said.But the president’s speech, al-Ahmar said, “mocked” the people to a great extent. It didn’t relate to any of their demands, which inflamed them. “People used to respect him and his position, but not anymore,” she said.

Al-Ahmar said demonstrators wanted to overthrow the ruling elite that has been in power for 40 years and made no improvements to the country. “We don’t want the same political icons, and we simply refuse the conditions of poverty and taxes that the state wishes to impose on us.”

Al-Ahmar said protesters avoided hostile confrontations with the army, which they understood had been deployed in the streets for the protection of those in power rather than the people. “We are aware of that and understand the army’s position.”

The demonstrations in Lebanon began on October 17 in response to a proposed tax on the use of the WhatsApp messaging platform. Protesters blocked highways and major roads throughout the country and banks were shuttered for almost two weeks, worsening the country’s financial crisis.

Meanwhile, there has been no progress in the formation of a new government following the resignation of Prime Minister Saad al-Hariri on October 29. Al-Hariri stepped down in the face of massive criticism and popular discontent.

Ali Amin, a Lebanese writer and political analyst, told The Media Line that protesters found the president’s interview provocative because he didn’t meet any of their demands. Instead, he came off as self-absorbed and full of hubris, and “he failed to address a very important issue: the people’s trust in him and his rule. It’s the responsibility of the government, not the people, to restore this trust.”

Amin said that the escalation of protests on Tuesday night was a reaction to the president’s statements and the killing of Abu Fakher.
He said that Abu Fakher had been shot after an argument with an army officer’s assistant, who was trying to pass in his private car. It wasn’t a confrontation between protesters and the army.

“The protesters’ demands became political when they felt that the government was mocking them. People were protesting the government’s performance and how the country had declined so much,” Amin said. The people’s ambitions, expectations and demands for change are high, but they are in every revolution.

Commenting on the lack of hierarchical organization and structure among the protesters, Amin added: “This uprising doesn’t have a formal leadership; it is a popular, spontaneous movement. But with time, leaders will need to emerge and ideas will have to take concrete form.”