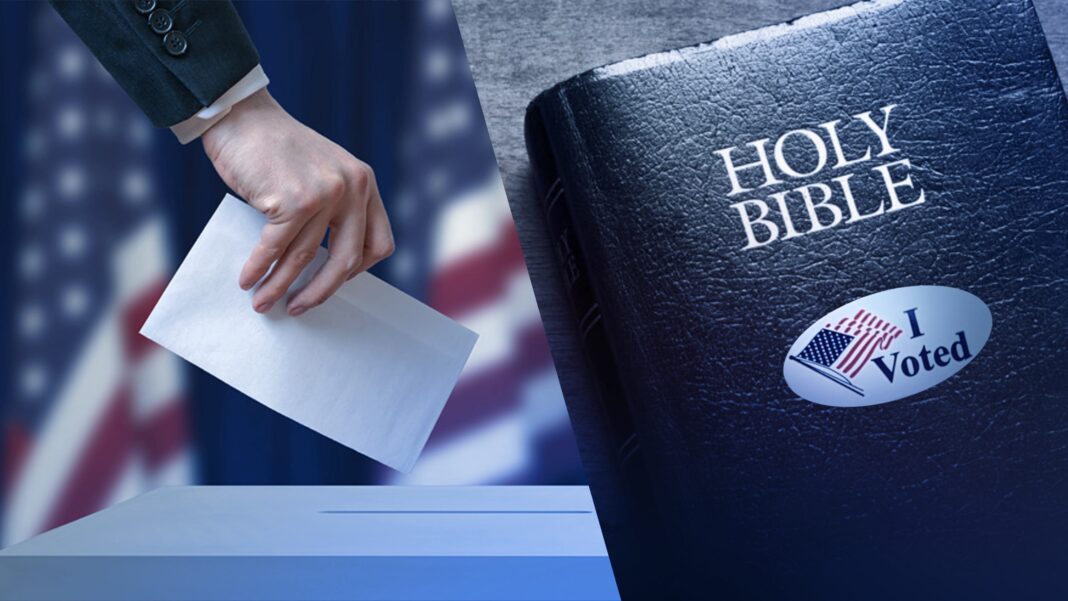 I’ve read quite a number of articles on whether Christians should vote, how Christians should vote, and so on. There are so many differing ideas. I come from a country (Australia) where voting is compulsory. Australia doesn’t have the type of constitutional protection America has where there is a special emphasis on free speech, freedom of religion, and free exercise of religion as written in the first amendment. I do praise the Lord for the freedoms that have been enjoyed in this great country.

When my wife and I became naturalized citizens many years ago, we were thrilled to know we could then choose to vote and contribute to who would be elected to shape what happens for those living in this nation.

We do take voting very seriously, so this month, right before what many are saying will be the most crucial election in America’s history, I thought it would be good to share with you the principles we use in regard to this important matter.

God’s Word tells us that as Christians we are to be salt and light in the culture (Matthew 5:13–16). To us, part of being salt and light is our neighbors seeing us participate in how the nation is governed and to apply our Christian worldview in deciding who we vote for. It’s important to be reminded of the warning Jesus gave to the disciples when he said, “But what comes out of the mouth proceeds from the heart, and this defiles a person. For out of the heart come evil thoughts, murder, adultery, sexual immorality, theft, false witness, slander. These are what defile a person” (Matthew 15:18–20).

In Luke, we read Jesus stating, “The good person out of the good treasure of his heart produces good, and the evil person out of his evil treasure produces evil, for out of the abundance of the heart his mouth speaks” (Luke 6:45). Jesus taught us if you want to know if a tree is good or bad, we can look at its fruit to see whether it produces good or bad fruit. He was teaching us that we can look at people to see what kind of fruit they have by judging what they say or do.

Now consider what some people were saying recently about presidential candidate Joe Biden choosing who would run for vice president with him:

It is very important to have a woman of color or a woman, as [Biden] has said—on the ticket. — CBS News

If he wants us to not just vote but bring our family and communities along in record numbers, he’s got to put a woman of color on the ticket. — USA Today

In other words, to these people quoted above, what is most important is how someone looks on the outside! Now that is not the correct way to decide who to vote for at all. Think about what God taught us when Samuel came to anoint the king. He didn’t know it was going to be David as we read in 1 Samuel 16:6–7:

1 Samuel 16:6-7 KJV – “And it came to pass, when they were come, that he looked on Eliab, and said, Surely the Lord’s anointed is before him. But the Lord said unto Samuel, Look not on his countenance, or on the height of his stature; because I have refused him: for the Lord seeth not as man seeth; for man looketh on the outward appearance, but the Lord looketh on the heart.”

Samuel thought it would be David’s brother he would anoint king, but God taught Samuel it’s not the outside that matters, but the inside—what’s in a person’s heart.

For a Christian, the outside, such as the shade of someone’s skin, the shape of their eyes, how handsome or attractive they might be, is not important. It’s who they are as a person, what they believe, and how they act (in other words, their fruit) that’s important.

After I gave a talk at a church on the fact all humans belong to one race—and explained that there really are no truly black or white people, as we all are basically just shades of the brown pigment melanin—a dark-skinned person came up to me on stage. He said to me, “So there are not truly black or white people, we’re just all shades of brown?” I replied that this is what I had taught. Then he said to me, “Well I voted for Obama because he was black, and now you’re telling me that was a stupid reason to vote for someone because he’s not black anyway.” I said to him that we shouldn’t vote for someone just because of their shade of skin; we need to vote for them because of who they are according to their heart. He certainly got the point.

We also need to understand the role of government. First of all, it’s important to recognize that God has ordained government:

Romans 13:1 KJV – “Let every soul be subject unto the higher powers. For there is no power but of God: the powers that be are ordained of God.”

And the purpose of government is to maintain law and order:

Romans 13:3-4 KJV – “For rulers are not a terror to good works, but to the evil. Wilt thou then not be afraid of the power? do that which is good, and thou shalt have praise of the same: For he is the minister of God to thee for good. But if thou do that which is evil, be afraid; for he beareth not the sword in vain: for he is the minister of God, a revenger to execute wrath upon him that doeth evil.”

So obviously, I want to vote for those who will want to maintain law and order. Of course, I also understand that if someone doesn’t believe in the Bible as the absolute authority, then right or wrong, or good or bad, becomes totally subjective. However, I know many people hold (inconsistently) to the morality that comes out of a Judeo-Christian ethic even if they are not necessarily Christians. That’s no guarantee they will continue to do this, but it’s still an important issue.

Romans 13:1 (above) also makes it clear that those who do govern are instituted by God. God is in total control. Remember, in Daniel 2:21 we read, “He changes times and seasons; he removes kings and sets up kings; he gives wisdom to the wise and knowledge to those who have understanding.”

Ok, now this then brings up this issue of man’s responsibility and God’s sovereignty that some see as a dichotomy. What is the use of voting if God determines who is elected? On the other hand, if our voting determines who is elected, then how can God be sovereign over this? Well, all the way through Scripture we see man’s responsibility and God’s sovereignty working hand in hand. We see this in salvation where we are told, “For by grace you have been saved through faith. And this is not your own doing; it is the gift of God” (Ephesians 2:8). And yet we’re also told that if you confess with your mouth that Jesus is Lord and believe in your heart that God raised him from the dead, you will be saved (Romans 10:9). There are numerous examples throughout Scripture where we see both human responsibility and God’s sovereignty.

To me, it’s simple: God is infinite and we are finite, so the infinite, all-knowing God brings these two things together in a way I can never understand. But I need to be faithful in obeying God and do what he tells me to do.

So yes, we all should vote (that’s our responsibility) and understand that at the same time God is totally in charge of who is voted in! But, also remember, there may come a time in this fallen world because of the sinful actions of people when we have to be like Peter and the apostles and say this:

Acts 5:29 KJV – “Then Peter and the other apostles answered and said, We ought to obey God rather than men.”

Now we also need to look at the moral issues confronting us in the culture and judge what people are doing against the absolute authority of the Word of God:

John 7:24 KJV – “Judge not according to the appearance, but judge righteous judgment.”

We see major issues prevalent in the culture today concerning marriage, abortion, and gender. Based on God’s Word in Genesis:

What about other issues, like climate change? Well, Noah’s flood caused dramatic climate change—and climate change ever since. If people don’t believe the history from the Bible concerning the flood and its consequences, they will make wrong decisions regarding climate change. Also, Genesis 8:22 tells us that while the earth remains, seedtime and harvest, cold and heat, summer and winter, day and night, shall not cease. So when political candidates tell us that people will destroy the earth in five or ten years, we know they are wrong. Now that’s not to say we shouldn’t care for the earth for God’s glory and use it for man’s good—but that’s a whole other topic.

However, here comes a difficult part. We live in a fallen world. Most of those running for a political office are not born again Christians who have a truly Christian worldview. For me, I also consider, for some positions, whether someone even has a likelihood of succeeding (part of my human responsibility).

I also know what a blessing it is to have freedom of speech, freedom of religion, and free exercise of religion. So I also look for candidates who will defend this as I pray we will continue to have the freedom to preach God’s Word and the gospel as we do through Answers in Genesis, the Ark Encounter, and the Creation Museum. Millions of lives have been impacted by what God has called us to do, and I know there are atheists and other anti-Christians running for office who would like nothing better than to shut down such Christian witness.

Ok, I feel rather exhausted having explained all that! So now, I do my due diligence. I check out those who are up for election and who I will have to vote for. I judge their fruit against the above criteria, and then I vote accordingly.

So my admonition to us all? Don’t vote as a Republican, Democrat, Independent, etc., but vote as a Bible-believing Christian who has taken his or her responsibility very seriously. And what else? Pray, pray, pray for the coming elections. Yes, pray without ceasing (1 Thessalonians 5:17). Also pray for kings and all who are in high positions, that we may lead a peaceful and quiet life, godly and dignified in every way (1 Timothy 2:2).