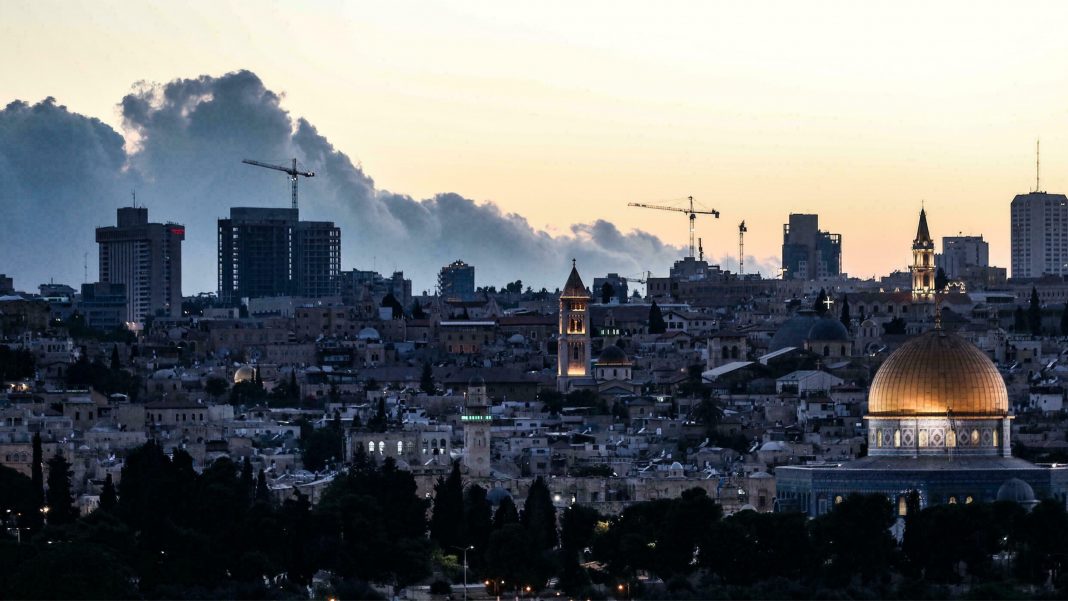 The massive blaze that erupted in the Jerusalem area on Sunday picked up pace on Monday afternoon after winds picked up speed, forcing the Israel Fire and Rescue Service to mobilize personnel from all over Israel and order the evacuation of another 2,000 people.

Residents of three villages were forced to evacuate on Monday as the fire continued to spread west of Jerusalem, and authorities the fire was approaching a Jerusalem hospital and could force a massive evacuation there as well. First responders were preparing for a rapid evacuation, although no decision was made as of late afternoon Monday.

Three homes were destroyed, the authorities said, in the fire on Monday. This comes less than a day after residents of multiple communities had to evacuate from the Jerusalem area because of the approaching fire.

The fire, which began on Sunday evening, continued to rage overnight and on Monday morning. The hotspots remained active as of Monday morning ultimately became a full-fledged forest fire after winds had picked up on Monday.

The flames have so far eaten away at over 4,200 acres (6.5 square miles), forcing over 10,000 people to evacuate their homes in almost 10 communities west of Jerusalem, including Beit Meir, Ksalon, Ramat Raziel, Shoresh, Sho’eva, and Givat Ye’arim.

On Monday morning firefighters were optimistic that the worst was behind them, having managed to get enough of the blaze under control to eliminate the immediate threat to homes in the area. But several hours later the area was once again ablaze.

Twito noted that efforts were currently focused on getting the existing hotspots under control and preventing new ones from forming.  Turgeman said that overnight, police forces patrolled areas cleared by the fire department to ensure no looting took place in areas where residents were forced to flee the blaze.

Prime Minister Naftali Bennett paused Sunday’s cabinet meeting when the fire department ordered the mass evacuation of civilians from the area to personally monitor the developments.

Late Sunday night, Bennett arrived at a command and control center set up on-site to oversee the developments.

Israel’s Top Firefighting official confirmed that the fires were a result of human actions, stating: “There was no lightning in Israel today. The fires were a human act. We don’t know yet if it was arson or negligence. We’ll investigate.”

Although the official could not confirm at this time that the fire was an act of arson, the blaze comes amid months of Hamas sending “incendiary balloons” across the border into Israel, sparking numerous fires.

Amir Tsarfati, Founder and President of Behold Israel, took to Telegram stating that he believes it was “Palestinian Arsonists” who set the fire “in the forests west of Jerusalem.”

In Psalm 122:6, Christians are specifically urged to “Pray for the peace of Jerusalem.”

Christians must understand their Biblical responsibility toward God’s chosen people. It is incumbent upon Christians to love, pray for and stand up for the Jewish people, the state of Israel, and their eternal capital of Jerusalem. God has not forgotten His people, and neither should His servants.

The terrorist actions by the “Palestinian” people should be universally condemned. However, the chosen narrative surrounding Israel, which is espoused by most major media outlets, has been to demonize the Jewish State, claiming it has bullied and oppressed the Palestinian people.

This is rooted in the same antisemitic thinking that has throughout history lead to the persecution and extermination efforts against the Jewish people.

RECOMMENDED: Hal Lindsey – What Is Hamas?

Hamas and others have brazenly made their goals to “obliterate” Israel and eradicate the Jewish people abundantly clear.

Terry James in his recent article, “Acceleration Toward Tribulation,” wrote:

I believe so. I believe the hatred for the house of Israel has been gestating within the incubator of barely-contained satanic rage. I believe the restraining hand of the Holy Spirit is being lifted to a degree, letting the spiritually attuned see that end-times anti-Semitism as it begins to crawl from that abyss-incubator.

The profound uptick in anti-Semitism, in my view, indicates that there is a speeding up in the rage toward the Tribulation era. That should inspire us as believers in Jesus Christ to expect at any moment His shout, “Come up here!” (Revelation 4:1).