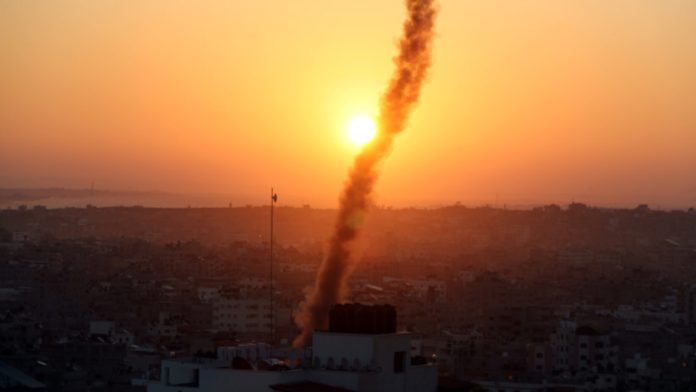 Israel may have provoked this round of rocket fire from Gaza through the targeting of at least one senior Palestinian Islamic Jihad commander. Jerusalem understood the severity of the situation, which is why much of the country from the areas around Gaza to Tel Aviv was almost shut down on Tuesday. This is a reflection of social cohesion as much as it is the government’s need to herd people out of the way of rockets. Israelis understand this kind of war.

Within 24 hours, there have been more than 350 rockets fired, and there have been some injuries. But Israel is showing maximum restraint in a sense. This is part of a pattern since March 2018, with terrorist groups in Gaza feeling like they can fire rockets almost with impunity. “Impunity” is the right word because they understand the balance of power here.

Every Hamas commander and Islamic Jihad commander knows they can be targets. But they also know generally how the response works. You fire rockets, your rocket teams will die. You fire rockets, your bases will be struck. But civilians will mostly go unharmed. This isn’t 2002; this isn’t 2009. Israel has achieved extraordinary precision in its use of judicious and proportionate responses.

But with proportionality, the devil is in the details. A rocket strike for an airstrike? Not even. It’s more like several rocket launches for an airstrike. This is the “clean” war, the war in which the Iron Dome defensive system intercepts almost 90% of the projectiles that are calculated to hit civilian areas. There are few casualties. There are many near misses. This is a revolution in warfare, one that has been pioneered by Western military powers since the late 1980s. This concept even has a theory named after it: the Revolution in Military Affairs.

The use of technology enables the ability of sophisticated states like Israel to fight what is called “asymmetric” war. That means Israel has munitions and platforms galore, from drones to F-16s to F-35s to different missiles and precise artillery. It’s not even a question of “can the target be hit,” but which of dozens of options would the military like to use.

Gaza is a closed space. It’s airspace and sea approaches are controlled by Israel. What goes in and out of the strip is mostly controlled by Israel or monitored by Israel and Egypt. There are no surprises. Maybe anti-tank missiles and sniper fire pose some threat. But gone are the days of the Qassam threats, the tunnels and even Hamas “commandos” trying to get through the sea to Israel.

The knowledge of the threat enables preparation for it. PIJ has rocket technology and is backed by Iran. It has lethal missiles. But air defense can generally deal with them. This enables Israel to have the time factor on its side.

The requirement to respond is always there. The public will not allow a “drip-drip” of rocket fire. Social media and the constant 24/7 television and radio discussion will goad the politicians toward war. What holds them back is the air defense ability to reduce casualties to near zero.

WITH TIME on Israel’s side and the choice of how to respond enabled by that time, the chance for mistakes is reduced. No need for a rush to action and disproportionate response. This is an illusion of war: it’s a war without going to war. Countries have perfected this in the late 20th and early 21st centuries as well. Concomitant to the military technological revolution is the advent of “small wars” and “the long war” against terrorism. In that sense, countries are involved in endless war, but those wars are “clean” and small.

What does that mean? The US is engaged in dozens of small conflicts, its 8,000 forward special forces deployed in 90 countries. That means from Somalia to Niger to Afghanistan to Syria and all the places we don’t know about. Israel’s conflict in Gaza is clearer, but it is still part of an endless and long war, punctuated by short bursts of violence.

Gaza is emblematic of what the Pentagon once saw as “grand strategy” back in the early 2000s: the concept of a functioning periphery of mostly powerful countries, and a non functioning gap where there are unstable governments or hostile regimes like Hamas in Gaza. Israel is one of the “functioning new core” types of countries, and the border line between it and the failed states is on the Gaza border.

While that’s all theoretical, it is still a way to understand the divide that takes place between Israel and Gaza. On one side of the line there is high technology designed to enable the Israeli democracy to function amid the threats; on the other side, there are terrorist groups that double as non-state actors running an autonomous region of the Palestinian Authority.

Israel has set itself on a policy of maximum restraint, against the demands of the far-Right, because the government knows that conflict in Gaza achieves few results and has possible long-term costs. There is no real benefit to fighting in Gaza – and there are downsides.

Among them is being distracted from the Iranian threat in the north. Iran uses Palestinian Islamic Jihad in Gaza to poke at Israel, but it has not achieved much so far. This despite PIJ having played an increasing role in rocket fire over the last year.

Hamas judiciously stayed out of this conflict for the first day. Maybe this benefits both PIJ and Iran, because the terrorist group can pretend it is “resisting Israel,” and Iran knows it can switch on the PIJ threat when it needs to.

How many rockets is too many for Israel to accept? Two hundred in a day? Five hundred in two days? One thousand? The threshold has not been reached. In the past, there were up to 460 fired over several days.

In 2009 Israel would have been at war already. The operation would even have had one of those names that include a word jumble: Summer Rains, Pillar of Defense, Protective Edge, Cast Lead.

Each rocket brings Israel closer to a choice and a calculated escalation. PIJ seems to calculate as well.