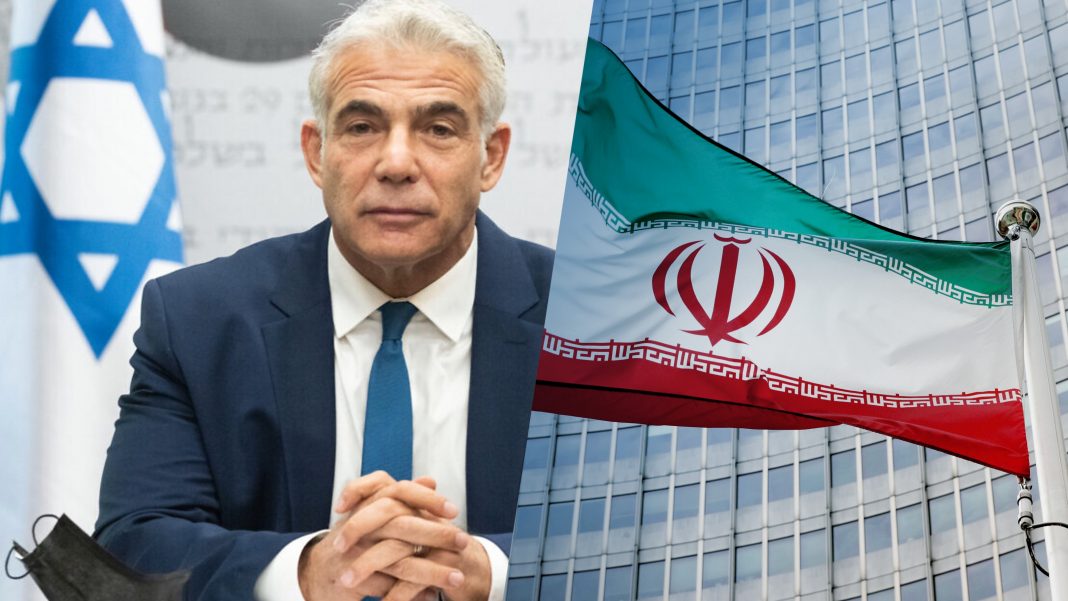 Israeli Foreign Minister Yair Lapid tells his Russian Counterpart Sergei Lavrov – ‘unless the international community acts against Iran’s nuclear aspirations – Israel will opt to act on its own.

Israel’s top diplomat and Israeli Alternate Premier made the remarks in Moscow, during his first face-to-face with Russian Foreign Minister Sergei Lavrov.

Speaking at a press conference following their talks, Lapid said he and Lavrov discussed the danger Iran’s nuclear program poses to the entire world.

Calling the latest two reports from the International Atomic Energy Agency (IAEA) “damning” due to “serious violations, fraud, deception and outright lies” by Iran that leaves it nuclear development unsupervised, he insisted that the IAEA Board of Governors must act by issuing a message to Tehran that “must be loud and it must be clear.”

“Iran’s march towards a nuclear weapon is not only an Israeli problem, It’s a problem for the entire world,” stressed Lapid, underscoring that, “A nuclear Iran will lead to a nuclear arms race in the Middle East. And the last thing any of us want, is to see nuclear weapons fall into the wrong hands.”

If the international community hesitates to thwart the Islamic Republic from attaining atomic bombs, stated Lapid in unequivocal terms, the State of Israel reserves the right to take unilateral action.

“The world needs to stop Iran from getting a nuclear capability, no matter the price. If the world doesn’t do it, Israel reserves the right to act,” said Foreign Minister Lapid, before reiterating that, “The Iranians have never hidden the fact that they want to destroy Israel. That is an existential threat for us. Israel will not allow Iran to become a nuclear state. Or even a nuclear threshold state.”

He went on to assert that the quest of both nations for global security and stability globally and particularly the Middle East cannot be attained until the withdrawal of Iran from Israel’s northern frontier and other regional arenas beyond its own borders.

“Iran is the world’s number one exporter of terror. It threatens us all. Israel will not sit quietly by, while Iran builds terror bases on our northern border. Or while Iran supplies advanced weapons to terror organizations. Weapons intended to be used against us. We will maintain our ability to defend ourselves in the face of threats from Syria and elsewhere. We of course recognize that Russia has key interests in the region. That is why we formed the military deconfliction mechanism – which is both necessary and effective,” he stressed.

Bilateral relations between Israel and Russia were also hailed in the Lapid-Lavrov talks, that exceeded the pre-scheduled timeframe.

Lavrov welcomed Lapid’s visit on the 30th anniversary of the restoration of diplomatic relations between the two nations, noting that, “These decades have proved that relations have become mature, advanced, trusting, for the benefit of the peoples of Russia and Israel. I hope that today we will take another step in the development of these ties, discuss bilateral affairs and the situation in the region and in the international arena.”

Jerusalem regards relations with Moscow as “great” and it does not forget its significant contribution to the establishment of the Jewish State, said Lapid.

Lauding the Russian Red Army for the rescue of his father Tommy as a 13-year-old child and liberating the Auschwitz death camp during the Holocaust, he added: “Three years later, the people of Russia supported the creation of the State of Israel. And we owe you. And we are a people with a long memory,” he added.

“Israel and Russia don’t always have the same interests, but the friendship between our nations is stronger than ever,” he continued, saying that Israel’s coordination mechanism with the Russians to avoid military conflict in Syria “is working in order” and that “there are no new restrictions on our actions to prevent terrorism.”

Russia has been engaged since 2015 in helping Syrian President Bashar Al Assad regain territory that had been lost during the country’s decade-long civil war against insurgents. Moscow also has been assisting Damascus with modernizing its security establishment, including the provision of air defense systems.

Although the two also discussed economic, cultural, historical and political topics, Lapid wrote, “Mostly, we wanted to examine new ways to strengthen the relationship between our two ancient and proud nations.

Lapid’s visit to Moscow came at the Kremlin’s request, as part of preparations ahead of a summit between Israeli Prime Minister Naftali Bennett and Russian President Vladimir Putin slated to be held next month.

In related developments, Russia’s IAEA Ambassador Mikhail Ulyanov commented on Twitter that the IAEA Board of Governors “can and should call upon Iran and the IAEA Secretariat to overcome the current problems and to maintain traditional businesslike cooperation” – he attributed as “primarily due to some external factors,” but said that “No action is needed” in the form of a condemnatory resolution against the Islamic Republic.

Iranian President Ibrahim Raisi has already warned that such a rebuke would not only be “unconstructive,” but would prompt an unhelpful response from the Ayatollah Regime.

In a follow-up question by TV7 to Ambassador Ulyanov whether Moscow would use its influence in Tehran to respond to IAEA requests for information on undeclared nuclear materials and access to monitoring equipment (both of which are the main issues of concern cited in the IAEA reports), he responded: “I think you are knocking on an open door, as far as Russia is concerned.”