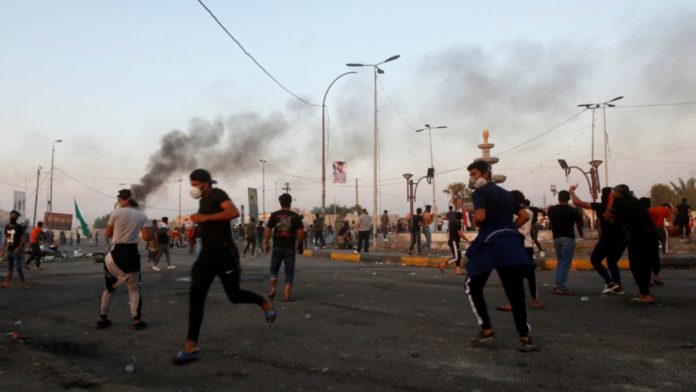 Iranian-made grenades are being used to kill protesters in Iraq, a new investigation shows. With more than 300 protesters estimated killed and a massive sit-in in Baghdad continuing, as well as clashes in Basra, Iraq’s protests are continuing their momentum. Iraq’s government appears to be missing in action as its Prime Minister Adel Abdul-Mahdi has not been able to contain the protests and rumors claim that Iranian-backed militias have been murdering protesters at night using live fire.

Over the last several nights protesters have fought with security forces for control of several bridges in Baghdad across the Tigris river. The bridges lead to the Green Zone and the government has erected barricaded to keep the people back. At night security forces, who protesters say are replaced at night by Iranian-backed militias, have killed protesters. During the day things are more calm. In Tahrir square massive protest gatherings, with tens of thousands or up to hundreds of thousands participating throughout Baghdad and southern Iraq, have persisted.

Iraq’s government, supported by Iran’s IRGC commander Qasem Soleimani Fatah Alliacne party leader Hadi al-Amiri has shut down the internet to stop the protesters coordinating. Some say this is also to prevent videos of killings disseiminating. But many point out that rumors of a “massacre” in Karbala last week and in Basra over the last several days, are not justified by facts on the ground. It is difficult to verify key details, because hospitals ad officials do not release casualty figures.

Hundreds of buildings have been targeted by protesters, including many parties linked to Iran, such as the Fatah Alliance and its Badr Organization, as well as militia groups linked to the Popular Mobilization Forces. This includes the offices of Asaib Ahl al-Haq and others. The Iranian consulate in Karbala has been attacked four times since the protests began in early October.

Iran is accused of backing the crackdown and advising the government to crush the protests. Amnesty International has investigated the use of a new variant of tear gas canister by security forces and shown that it is being used to kill “rather than disperse crowds.”

This must end immediately Amnesty says. Human Rights Watch has also joined the warnings about Iraq’s use of lethal force. Belkis Wille of HRW tweeted on Friday that Iraqi forces have killed over 100 protesters. “Government should launch investigation into each and every death by security forces.” Iraqi security forces have aimed the tear gas canisters at the heads of protesters.

Amnesty International’s Conor Fortune tweeted Friday about the use of the canisters. ‘Why are military-grade grenades from Iran and Serbia causing horrific injuries and death in Iraq.” The Amnesty investigation shows that the grenades or canisters have been tracked to Iran and Serbia. “Now they must be taken out of use.” They cause horrific injuries, he writes. They appear to weight up to ten times more than usual tear gas canisters.

While the human rights groups have documented and investigated the use of these weapons, many questions remain about who ordered their use and who is guiding the attacks on protesters. The government has not sent the army to clear streets and slaughter people. Instead, many security forces remain in their barracks or even mill about with the protesters.

It appears that members of the PMU and other units that do not have insignia are being used at night to intimidate and kill. But these units don’t have the manpower or support to totally destroy the protests. Instead, they target certain areas. They have given up on clearing Tahrir square in Baghdad. In the last days the government has complained that protesters are blocking roads and that oil cannot flow from Basra to the port of Umm Qasr.

On November 5 protesters seized armored vehicles from the 36th armored brigade of the Iraqi army. In response government forces tried to reopen the port, which they succeeded in doing briefly on November 7. Between 10 and 17 people may have been killed in these clashes between Basra and the port. Local tribes have supported the protesters.

Grand Ayatollah Ali Sistani has called on the government to listen to the protesters. Muqtada al-Sadr, a populist leader and Shi’ite cleric has also appeared to support the protests, but he has vanished recently after a series of visits to Iran, appearing to relinquish his authority to press for change. The Prime Minister appeared ready to resign but now he is waffling. The President of Iraq flew to the Kurdistan Region to consult with the autonomous region. The Kurdistan region fears more instability and has been working with Abdul Mahdi on budgetary issues.

Meanwhile, the US-led Coalition is still trying to work with the Iraqi army to combat ISIS. Anti-ISIS operations are ongoing. But the protests have called into question the effectiveness of Iraq’s government. On Friday night rockets were reportedly fired near an air base near Qayarra south of Mosul. The base, called Q-West, is important and was used to help defeat ISIS in Mosul.

Lawk Ghafuri, a journalist, writes that 11,000 have been wounded since early October and that more than 1,000 wounded between November 3 and 7 this week. Twenty-three more have been killed in the last several days.