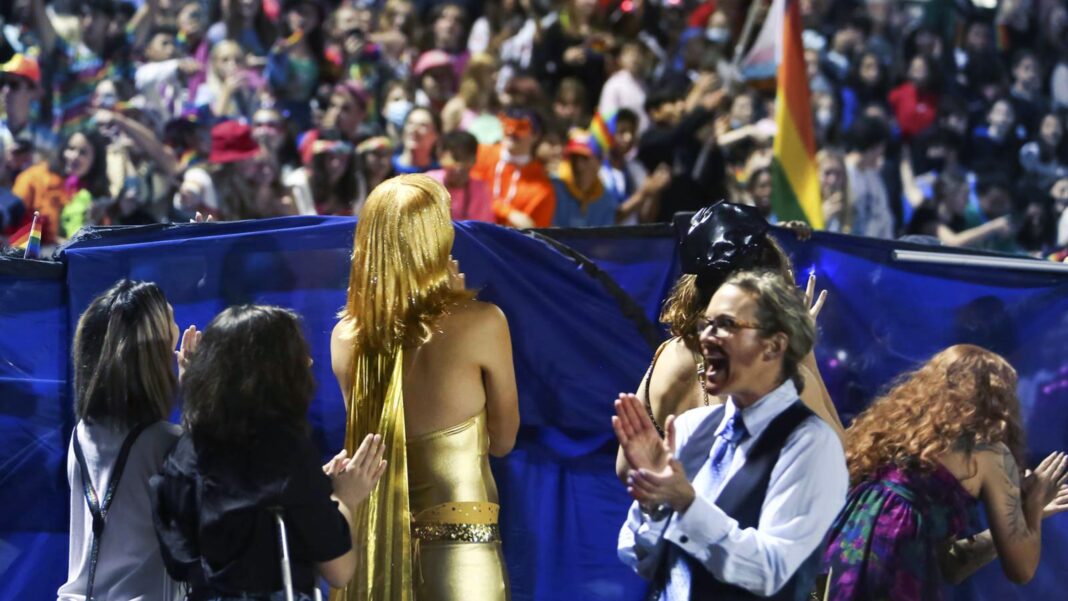 File this one in the “Believe it or Not” section.  If you already think this country is going downhill, well it just slid a little further down.

A Vermont public high school homecoming football game last Friday night turned into a “drag ball” runway at halftime, with a mix of students and faculty members parading in gowns, wigs, and makeup – and a big crowd in rainbow colors to cheer them on.

Yes, you read that right – it happened at a public high school, and faculty joined in.

The Associated Press reports as school cheerleaders wrapped up their routine, about 30 students and faculty members from Burlington High School dressed as drag queens and kings – or a bit of both – walked out onto the field and the crowd started to chant, “Drag Ball!”

Andrew LeValley, an English teacher and adviser for the Gender Sexuality Alliance at the school, came up with the idea for the event.

He joined students on the makeshift runway, dressed in a Shakespearean burgundy gown and a wig. He said he was inspired by Lady Macbeth and Marie Antoinette.

The high school’s Athletic Director Quaron Pinckney had suggested the event be held at halftime of the football game.

Pinckney, who is Black, said the school gave him the space to “uplift my voice” and that he was able to reciprocate and “uplift the voices of another marginalized group and share a space in the athletics realm that doesn’t normally get shared.”

And another user tweeted, “The country has gone mad!!”

According to the Daily Caller, the Principle of the school was “excitedly” on board with the idea, and as was the superintendent of Burlington, Tom Flanagan, who took part in the event “wearing a rainbow cape and holding a rainbow flag.”

“About thirty participants, most of them male, strutted the track in a mixture of gowns, dresses, high-heeled boots, feather boas, colorful wigs, and other accessories with techno music playing in the background. Students in the stands, decked out in rainbow attire, cheered them on,” the Daily Caller reported, further noting that it is this type of LGBT policies and indoctrination that have “embroiled school boards in controversy over the past year” from parents.

Author and ‘Stand Up For The Truth’ radio host, David Fiorazo, writing about the effort to push LGBTQ ideology, explained that “the goal has always been the children.”

Fiorazo warned that “the current drag queen phenomena is no different: Convert kids to liberalism and if they have any belief in God or any understanding of biblical morality, retrain them through ‘education.’ And if their parents are conservative or have taught them anything other than what aligns with LGBTQ ideology, draw them away from their parents.”

“From Hollywood and politics and the government school system to the American Library Association, the systematic roll-out of depravity and moral confusion via drag queens and transgender ideology was planned long before it was ever implemented,” he continued.

“It’s not difficult to understand this worldview: remove God, His Law, and any fixed, moral authority – and guess what? Anything goes. And I mean, anything. The Bible warns us about ‘men who suppress the truth in unrighteousness; and the wrath of God that comes as a result,” he wrote. “We have denied not only the supremacy of God but His very existence. This naturally leads to the worship of self. Idolatry in this context is worshiping lifestyles and human beings, creating a god in our own likeness according to worldly, pagan preferences.”

“We’ve passed this down to the next generation,” Fiorazo underscored.

“We’re witnessing a cultural transformation from truth to fiction and from the sane to the insane,” he said. “God has given them over to a depraved mind, and history teaches us that there will be consequences. God gave us a conscience. Romans 1:19, 21 states: ‘…because that which is known about God is evident within them; for God made it evident to them… For even though they knew God, they did not honor Him as God or give thanks, but they became futile in their thoughts, and their foolish hearts were darkened.‘”

“The Left has controlled the nation’s schools [for] more than five decades, and we need to understand that rather than providing a true education, progressive teachers’ unions are grooming young extremists every single day,” he insisted.

“It all points to the decline of morality in American culture and the increase of wickedness which Jesus predicted as one of the signs we’re approaching the end times. As a result of lawlessness and blatant celebration of evil, He said that ‘the love of most will grow cold…'(Matt. 24:12),” he concluded.

Furthermore, as Answers In Genesis explains in their article, “Transgender—Bringing Clarity to a Confused World,” “gender-bending and cross-dressing are not new behaviors. They are ancient,” the writer explained referencing Deuteronomy 22:5, which reads:

Deuteronomy 22:5 KJV – “The woman shall not wear that which pertaineth unto a man, neither shall a man put on a woman’s garment: for all that do so are abomination unto the Lord thy God.”

“Embracing transgenderism, whether individually or societally, is first and foremost an offense to our Creator, God,” the AiG article further states. “Men and women of any age who flirt with such temptations, who listen to the serpent’s whisper, are in mortal danger. They face hell for their sin. We must tell them the truth about their rebellion against a holy and righteous God. We must tell them about the Cross and the Resurrection of Christ. In Jesus’ shed blood, we find forgiveness. In the risen Savior, we find power over the grave. It is this news, and no elaborate gender theory from a college classroom, that sinners just like us desperately need.”