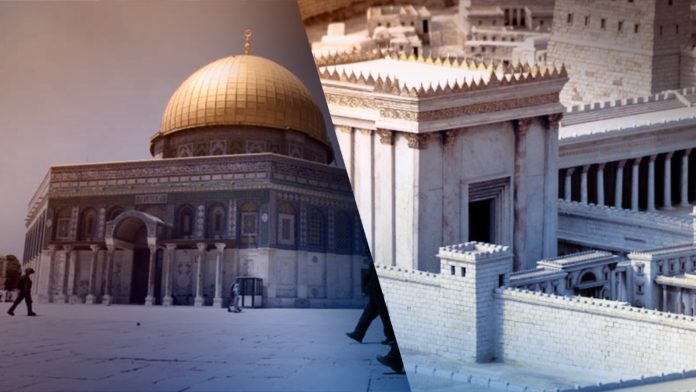 The Supreme Court of India ruled that an ancient temple must be rebuilt and a mosque that was built in its place must be relocated elsewhere. The case is surprisingly similar to the situation at Jerusalem’s Temple Mount and some see this as a precedent paving the way for the return of a Jewish Temple.

A dramatic Supreme Court decision in India on November 9, marked the culmination of a decades-long legal battle over the disputed area in ​​Ayodhya, Uttar Pradesh. In the 1,182-page ruling, the five judges unanimously agreed to allow the rebuilding of the Hindu temple and the relocation of the Muslim mosque claimed to have been built on its ruins in 1528. According to the court’s decision, all disputed territory would pass to the Hindu “temple groups” as they are known in India.

The story began in the 1980s when Hindu groups began a campaign to build a religious structure on the site. In response, the government allowed them access to pray. In December 1992, Hindu nationalists demolished the mosque, resulting in riots leading to over 2,000 deaths.

In 2003, the Indian government ordered an archaeological survey of the site the results were presented to the High Court that was judging the matter. The survey determined that the remains of a 10th-century temple existed under the mosque. Hindus revere the site as the birthplace of the deity Rama. The archeological team said that human activity at the site dates back to the 13th century BCE. The report concluded that it was over the top of this pre-existing structure that the disputed mosque was constructed during the early 16th century.

In 2010, the Allahabad High Court ruled that the 2.77 acres of disputed land be divided into 3 parts, with ​1⁄3 going to the Ram Lalla or Infant Lord Rama represented by the Hindu Maha Sabha for the construction of the Ram temple, ​1⁄3 going to the Muslim Sunni Waqf Board, and the remaining ​1⁄3 going to a Hindu religious denomination Nirmohi Akhara.

That ruling was contested and last week, the Indian Supreme Court gave its final ruling that the land required to build the Hindu temple be handed over by the Muslim authority. The court ruled that the Muslim organizations failed to prove exclusivity on the ground, and that over the years the Hindu ritual affiliation was maintained. It also ordered to the government to give alternate 5-acre land to Sunni Waqf Board to build the mosque.

The Muslim authorities were dissatisfied with the ruling and threatened a violent reaction.

“Justice was not done fully as Muslims cannot shift the mosque, therefore, accepting an alternative land for the mosque is absolutely out of the question,” the Sunni Waqf board said in a statement. “While the legal option is available, there is also Sharia obligation to defend the masjid till the last breath.”

“This is a matter of Sharia. We can neither give the mosque nor take anything in lieu of it,” the Muslim authorities added.

Dr. Mordechai Kedar, a senior lecturer in the Department of Arabic at Bar-Ilan University, noted that this decision dealt with an issue that concerns a widespread practice in Islam.

“Islam has always taken over the holy sites of other religions,” Dr. Kedar said. “The Muslims in India did precisely what the Muslims did on the Temple Mount.”

One of the more egregious examples of this is the Hagia Sophia. Built as a Greek Orthodox Christian patriarchal cathedral in 360 CE, it was the world’s largest building and an engineering marvel of its time. In 1453 it was converted into an Ottoman mosque.

Assaf Fried, the spokesman for the Temple Organizations, noted the unmistakable similarities between the case in India and the situation on the Temple Mount in Jerusalem.

“This is a powerful precedent, “ Fried told Breaking Israel News. “The situation is precisely like the one in Jerusalem. Though it cannot be used in Israeli jurisprudence, conceptually, it is compelling.”

“Just as the Indian government recognized the rights of the Hindus, the Israeli government needs to recognize the religious rights of the Jews in the land of Israel,” Fried said. “Right now, Muslims do not allow these rights that are mandated in both Israeli and international law to be exercised.”

“The structure of the Dome of the Rock, which is not a mosque but only a monument, can be moved to another location on the Temple Mount or in Jerusalem. It could even be transferred to Mecca.”

“The situation as it currently exists in Israel is in contravention of the laws of Israel pertaining to religious equality and human rights,” Idri told Breaking Israel News. “This is clearly true on the Temple Mount. The High Court has ruled time after time that Jews have the right to pray at the site and time after time, the police cite security concerns and refuse to enforce the law. It is undeniable that this policy is expressly discriminatory.”

“The sanctity the Jews ascribe to the site is simply not recognized,” Idri said.

Idri compared the Jewish struggle on the Temple Mount to the movement to bring civil rights to the negroes in the U.S. in the 1950s.

Yaakov Hayman, chairman of the United Temple Movements, agreed that the case in India was identical to the situation at the Temple Mount but he did not feel the same tactic would work in Israel.

“The laws of Israel are irrelevant if they contradict the laws of the Torah,” Hayman said, citing a Talmudic precept concerning lost objects.

“If a person despairs of having a lost object returned, then it can be claimed by another,” Hayman said. “The Jews have shown generation after generation that they have never despaired of returning to Israel, returning to Jerusalem, and returning the Temple to its proper place. The Temple Mount could never be claimed by another nation so long as we retained our claim to it. That would be theft and the Muslim Arabs did, in fact, steal the Temple Mount. That is the only claim they have to the site; the claim of theft.”

“The Jews could not forfeit any part of Israel because it is not ours to forfeit,’ he added. “It is part of the covenant. And three times a day, we pray to be returned to Zion, to the Temple.”

He suggested moving the Dome of the Rock as an alternative.

“It is a beautiful building but it doesn’t need to be precisely there. That specific site is holy to the Jews. I think that what was shown in India is what should be done. If it was done in India, it can be done in Israel.”

Hayman felt that a change was needed in other sites that were holy to the Jews that are currently under Islamic control.

“Jews cannot pray at many sites, like the Tomb of Joseph,” Hayman said. “Yet instead of honoring them or claiming them as Muslim, the Arabs burn them down. We certainly should be given control of those sites.”