‘If We Are Silent, We Are Complicit’: Small-Town Church Stands Tall for the Unborn 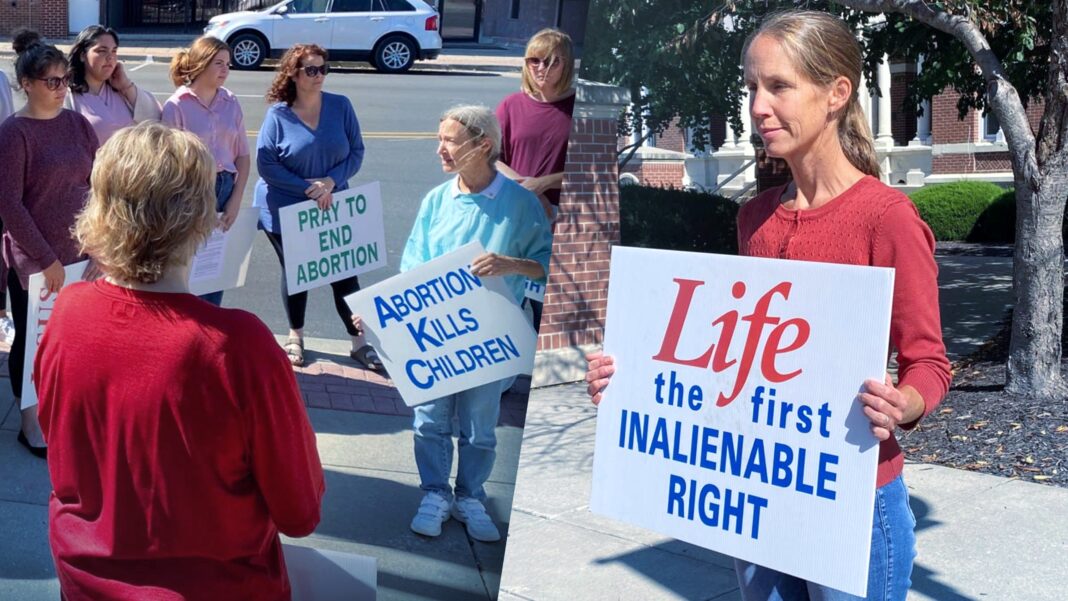 On a cool October Sunday, volunteers lined the streets of downtown Maryville, MO, holding up signs urging Stand for Life and Protect the Unborn!. It would be an hour of campaigning for a cause that is close to the heart of the congregation of Calvary Chapel Maryville, who gathered joyfully to stand for the lives of the unborn. In the fight against abortion, already long and still ongoing, the congregation is determined to make a difference.

Proverbs 31:8 NKJV – “Open your mouth for the speechless, in the cause of all who are appointed to die.”

Nationally, October 3 was Life Chain Sunday. This  year, around 75 participated in the Maryville “Chain”, including 50 from CC Maryville.

Life Chain was started in 1987 by Please Let Me Live, a small pro-life ministry based in Yuba City, CA. From 1995 through 1999, approximately 900 Life Chains were built annually in America and Canada combined. There are now more than 3,000 branches throughout the two countries. Nationwide, many churches have taken up the cause, alongside other volunteer groups. Volunteers in Maryville, ranging in age from 15-60, met at the courthouse to pray before taking up their signs along the main road through town.

Passion for a Cause

Since the beginning of their fellowship, started as a Bible study, Pastor JD Dirks and his wife Jenny have had a passion for this cause. And they have been joined by prominent members of the community within the last several years.

Maryville Council Member John McBride and his wife discovered CC Maryville’s pro-life outreach six years ago. He related, “The silent protest for those that can’t protest [for] themselves is something God really stirred in us. God knew us while we were still in the womb. We need to be the voices for God’s children in any little way we can!”

Jenny agreed. “The fact that I am a mother has greatly affected my involvement. How can we as mothers—those who have said Yes to life—just step aside and act like the issue of abortion is no big deal? As Christian mothers, I think it is a good thing to be involved in Life Chain. To me, it is another opportunity to be vocal for truth, to be a light for those living in darkness.”

John recollected a story from a Chain several years ago. “A co-worker I had been praying for drove by where we were standing along the road and heckled what we were doing—very vocal about it and mocking. But this same co-worker got saved about two years ago. This year the same scoffer and mocker drove by slowly with an outstretched hand quietly saying, “Amen” and “God bless you guys.” Although we aren’t to respond during this silent protest, I lifted my hand towards my new brother and smiled! God filled my heart right there; it was truly a conversion and an experience I won’t soon forget.”

Lisa Goedkin, the Nodaway County Life Chain organizer, has assisted the church with this ministry for most of the last 20 years. Though she does not attend CC Maryville, she strongly believes in the cause that they support. Pastor JD appreciates her experienced aid, especially given the pushback they’ve sometimes received during Chain events.

JD noted varied responses from passers-by. “If there’s any interaction with the volunteers, it’s usually a friendly honk from a car showing support or a college student flipping us off or screaming out the window, which is usually incomprehensible. The staff and volunteers [can] face a lot of rage and disdain from those who drive by.” There have been positive responses, though. As he humorously recounts, his son likes to keep track of those who honk in appreciation. “This year’s count was 14-for, 16-against.”

Not Afraid to Stand Alone

CC Maryville often feels alone in this fight, “[but] we are working to change that through communication and advocacy for the unborn,” JD declared. The church holds outreach events to make other church and community members aware of their prayer walks, like the one that caught the attention of John and his wife. Their biggest effort is put into the Life Chain walks, something that the pastor thinks sets their church apart in Maryville.

JD firmly exhorted, “Many church leaders are just afraid to be public about their beliefs or have become liberal in their thinking and therefore support abortion on demand. [Calvary Chapel founder] Pastor Chuck Smith always encouraged pastors to stand up for righteousness, especially in these Last Days. We believe that if we are silent, we are complicit. Revelation 21:8 adds cowardly to the list of those who have their part in the lake of fire. It can be a real problem when the Church cowers in a corner instead of standing firm.”

1 Corinthians 15:58 KJV – “Therefore, my beloved brethren, be ye stedfast, unmoveable, always abounding in the work of the Lord, forasmuch as ye know that your labour is not in vain in the Lord.”

Some past interactions JD and his church have experienced have sobered his understanding of the issues facing Christians and the nation. “There was once a part-time reporter for the local paper. He was for a ‘woman’s right to choose’—his words. What surprised me was that he was the drummer for a local church,” JD shared. “It was at that point I understood that many churches are not involved on purpose; Abortion is a hot topic that could damage attendance if spoken from the pulpit. It further confirmed why, in a town with eight churches, God would call me to plant another one … we are different.”

Pastor JD prays that as the fight for life continues, they may touch more lives and that God would use them to amplify His voice by speaking out.

Are Christians Against Abortion Because of an ‘Ancient Mistranslation’?