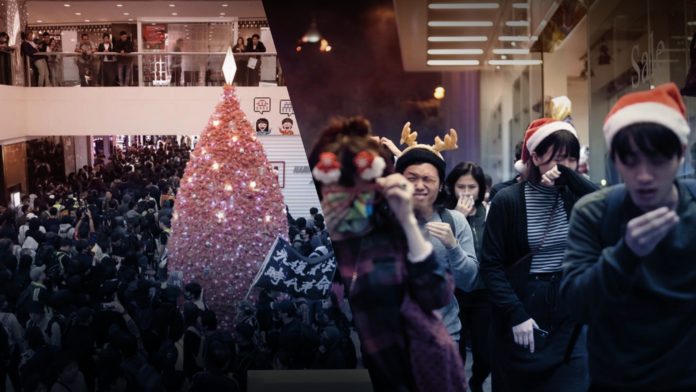 Tear gas volleys were fired and petrol bombs lobbed in Hong Kong Tuesday night as protesters clashed with the police.

Clashes soon erupted, with riot police firing multiple rounds of tear gas to disperse protesters throughout the evening, including outside the famous Peninsula Hotel.

Mini-protests also flared in in malls across the semi-autonomous territory, where plainclothed officers made arrests and demonstrators chanted anti-government slogans.

A former British colony with a considerable Christian population, Hong Kong is having a distinctly muted Christmas this year.

Hong Kong’s many malls have become regular protest venues as protesters try to cause economic disruption in their push for greater democratic freedoms, seen as curbed by China, and police accountability.

Tuesday’s clashes followed weeks of relative calm in the city that has been for months mired in public unrest, which sent it into an economic recession.

The protests were triggered by a contentious bill that could have allowed the authorities to extradite individuals to mainland China; however, over time, the protesters’ agenda grew to include suffrage and third-party probe of police brutality in the crackdown on the rallies.