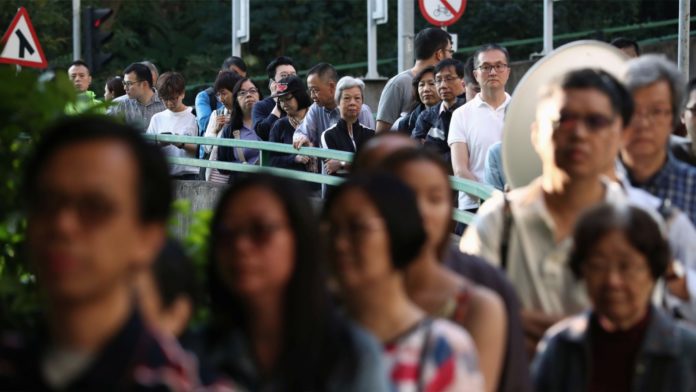 The Hong Kong pro-democracy movement fueled record voter turnout and a crushing defeat for pro-China parties in Sunday’s District Council election, leaving the establishment with only 60 of the nearly 500 seats on the council.

Voters took to the streets to celebrate the victories – and the losses of public officials who had become the villains of the pro-democracy movement like Junius Ho, a District Council member who gained notoriety by shaking hands and chatting with a mob of communists while they violently assaulted unarmed protesters in July. Champagne overflowed on the streets Monday afternoon in celebration.

Many of those elected to District Council seats are members of the pro-democracy movement with key roles in organizing protests. Among them were Jimmy Sham, who has suffered two violent assaults since the protest movement began in June; Andrew Chiu, a District Council member who lost his ear this month after a communist bit it off; and Kelvin Lam, the stand-in candidate for Joshua Wong, the head of the Demosisto pro-freedom movement.

Wong is the only prospective candidate the Hong Kong government banned from seeking a seat on the District Council, claiming him to be a dangerous “separatist.”

According to the Hong Kong Free Press (HKFP), a whopping 2.94 million voters – 71.2 percent of the voting population – showed up to the polls on Sunday, a 25 percent increase from the last election in 2015. Hong Kong’s population is around 7 million, making the number prodigious even taking into account the non-voting population. Some reports suggested polling stations were overwhelmed by the turnout and some had to wait as long as 90 minutes to cast their ballots.

Pro-democracy, anti-China candidates won 347 of the District Council’s 452 seats, leaving the pro-China camp with only 60. Another 45 seats went to “independent” candidates, most with sympathies for the official pro-democracy parties. The largest party within the pro-China camp, the Democratic Alliance for the Betterment and Progress of Hong Kong (DAB), won 21 seats, losing 98 seats. The vote leaves only one of the 18 District Councils in control of the pro-communists.

Hong Kong boasts two types of lawmaking bodies – the Legislative Council (LegCo) and the District Councils. There is only one LegCo, which addresses regional issues and functions as the largest autonomous region lawmaking body, handling relations with Beijing. There are 18 District Councils throughout the region, set up to pass laws addressing local issues. Voters directly election all District Council members, while LegCo features a mix of directly elected candidates and candidates appointed by special interest groups. China uses those special interests to control Hong Kong and create laws that favor Beijing.

District Council seat winners used the opportunity to emphasize that their victory was a mandate for Hong Kong’s public servants to listen to the demands of the protest movement. The movement has imposed five demands on its government; one, the full withdrawal of a LegCo bill that would have allowed China to extradite anyone present in Hong Kong, the government has already met. The other four Chief Executive Carrie Lam has vowed to ignore: freedom for political prisoners, an end to calling protesters “rioters,” an independent investigation into police brutality, and direct election of LegCo members.

“Today’s result represents (my constituency’s) support to protesters. The government should immediately establish the Five Demands and respond to the public’s voices,” Jimmy Sham, a newly elected District Council member still hobbling on crutches after being attacked by hammer-wielding communists last month, said in a Facebook post Sunday.

“The people of Hong Kong have spoken – if you abandon Hong Kongers and our struggle for democracy, we will abandon you in the ballot box,” the Hong Kong Democracy Council (HKDC), an anti-communist group, said in a statement following the election.

The leaders of what are now the largest parties in District Councils also weighed in to celebrate the win and vow that they will work towards the goals of the protest movement.

“The voice coming from the ballot box is loud and clear: we want Carrie Lam to withdraw the police from PolyU … we want the current administration to consider resignation, from the top down to all politically accountable secretaries and Executive Council members,” Civic Party chairman and former lawmaker Alan Leong Ka-kit said. Lam stormed Hong Kong Polytechnic University (PolyU) with riot police last week, trapping hundreds of students inside and destroying the campus.

“The results are beyond candidates’ personal effort, being part of the movement from all the protesters; all the people being hurt and arrested. We have to bear in mind that that’s the basis of the support,” Democratic Party chairman Wu Chi-wai said. “We have to use all our efforts so the five demands have to be met in the near future.”

Lam issued a statement applauding the free and fair elections, though Beijing, through its state media arms, complained of alleged foreign intervention on Monday.

“I sincerely thank the public for their active participation in the District Council election,” Lam said in her statement. “In general, the election yesterday was held in a peaceful, safe and orderly manner. After the social unrest in the past five months, I firmly believe that the vast majority of the public would share my wish for the peaceful, safe and orderly situation to continue.”

Junius Ho, who became a lightning rod for anti-China sentiment after both his friendly meeting with violent communists and attacking a pro-democracy lawmaker married to a British man also issued a gracious statement.

“I’m so sorry!” he wrote on Facebook, calling the election “very strange.”

“I’m moved, the opposition overwhelmed me with congratulations. It is not a bad thing to transform their brutality to harmony,” he wrote.

Ho’s was perhaps the most celebrated of the pro-China caucus’s losses. Hong Kong voters took to the streets to cheer and drink champagne following the official concession.

As the District Council typically addresses only local concerns, it is not clear how the pro-democracy camp will use its power to challenge China. The election does suggest that any LegCo seats open to a legitimate vote will fall in the hands of pro-freedom candidates, potentially triggering rule changes to prevent a similar sweep at a higher political level.