The conservative Heartland Institute released a report on Tuesday in which it criticized leading politicians, activists, and media outlets for using the coronavirus to push their environmental agenda.

The report, published on ClimateRealism.com and Heartland.org, comes amid complaints that Democrats have been trying to shoehorn some of their agenda, like emissions reductions, into legislation designed to relieve the virus’ economic burden. Titled “Never Waste a Crisis,” it focuses on tweets, which range from asserting the coronavirus had a “silver lining” to others in which people attribute clearing skies or water to the lack of economic activity resulting from the virus’ spread.

In one example, Sky News’ Ed Conway suggested that the coronavirus was “the ultimate weapon” against climate change. “Don’t take this the wrong way but if you were a young, hardline environmentalist looking for the ultimate weapon against climate change, you could hardly design anything better than coronavirus,” he said in an op-ed posted by the Times.

The paper argued that Conway was highlighting the virus’ “silver lining.” According to CBS Los Angeles, clearing canals and emissions reductions were part of the “silver lining” of the pandemic as well.

Greenhouse gas emissions are in the spotlight amid the coronavirus pandemic. In early March, satellite images from NASA and the European Space Agency spotted an enormous decline in airborne pollutants, specifically nitrogen dioxide (NO2), in large areas of China.

In the U.K., a recent report by solar power specialists The Eco Experts estimates that the country’s CO2e (carbon dioxide equivalent) emissions are set to drop by 28.22 million tonnes over the 12-week period following the implementation of social distancing measures on March 19. NASA also tweeted on Monday that California saw decreased nitrogen dioxide concentration.

Oxford professor Peter Frankopan wrote in the Times that the “world’s lungs are already breathing more easily thanks to the collapse of industrial production.” Frankopan’s piece was titled: “Pandemics are terrifying but they can make the world better.”

“With #Coronavirus dominating the headlines, we can’t forget about another major global threat: Climate change,” New York Governor Andrew Cuomo tweeted in March. He included an appeal to pass the “Restore Mother Nature Bond Act,” which entails $3 billion in spending on environmental projects. A DJ from Cuomo’s home state said he’d be OK with using the coronavirus as a “front” to force humans to abstain from impacting the environment.

Other examples seemed more restrained. “A friendly reminder: The coronavirus is not a good thing. We should not cheer its effects on reducing pollution,” writer Eric Holthaus tweeted. “The whole point of climate action is to save lives. If anything, this pandemic is proving we can (and will) rapidly eliminate fossil fuels.”

One of the more egregious tweets came from a Twitter account tied to Extinction Rebellion, a left-wing environmentalist group.

“Earth is healing. The air and water is clearing. Corona is the cure. Humans are the disease,” the tweet read. 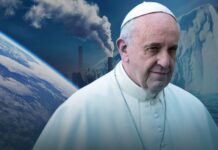 Netanyahu Calls on UN to Stand with the US in Mid-East...