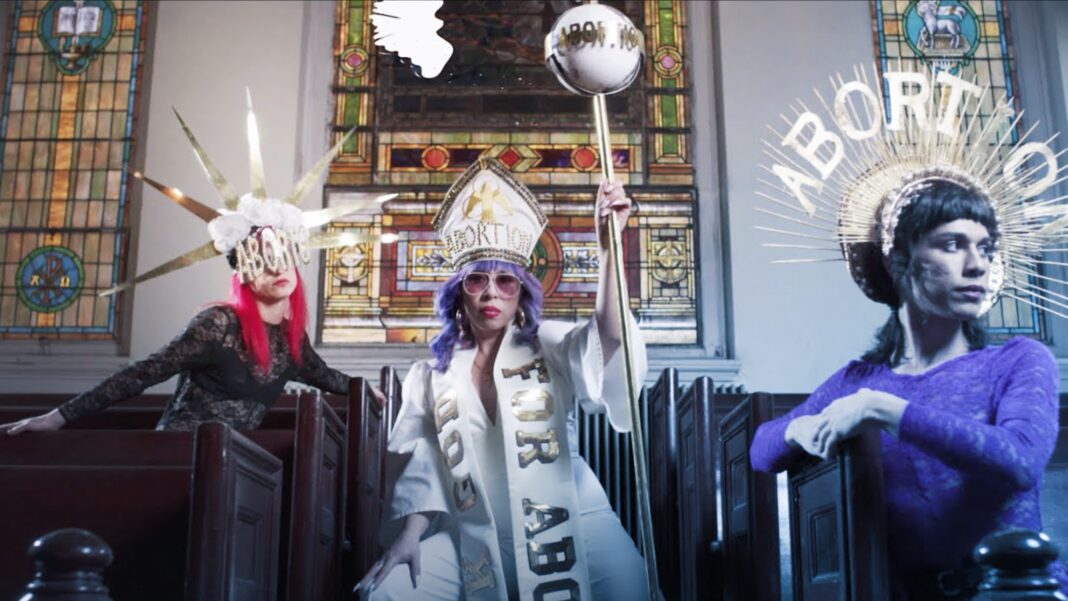 A disturbing music video was released earlier this month that displays just how far the left has gone in their celebration of sin. The song, titled “Thank god for Abortion Anthem,” shows people in a church worshiping the murder of unborn children in the womb.

Here is a description of the video:

Angry pro-life protesters with “Men know better” and “Abortion no. Guns yes” signs protest in garbled, unintelligible words. The Holy Spirit descends down and urges the confused menagerie into a church, where they are met with women in choir robes that and some bizarre pro-choice pope that dance around the altar in front of the cross praising abortion for the glorious wonder that it is, until the protesters, convinced of the error of their ways, rip up their signs and join the blasphemous fray.

And that, in a nutshell, is the new music video by artist and director Viva Ruiz, the ignoble creator of Thank God for Abortion and the artist in residence at “Shout Your Abortion” where she creates content to celebrate the burning, dismemberment, and destruction of babies in an appropriately ghoulish career.

The video is shocking for its visceral imagery and in how blatantly it appropriates and bastardizes Christian themes, purposefully provoking a response perhaps in hopes to hide the fact that the song itself is objectively awful in its composition and lyrical arrangement.

The lyrics, which can be seen here in full, feature a few choice lines:

Stop torture of women
Get with it!
Fascist politicians
Christian fundamentalists
All the white feminists
Spiritual people
non spiritual people
Creepy racist liberals
and the machistas
we need everybody in this

The “artist” and activist from Thank god For Abortion (TGFA), Viva Ruiz, described the group as having a “spiritual mission”:

“TGFA is a spiritual mission to affirm the sanctity of abortion having people. Queer people, gay people, trans people, and people of faith all have abortions.” she claimed. “Where have our narratives been? I have had 2 abortions, am Latinx, queer, fluid, and Christian. We know that God loves us and we are blessed. Blocking access to abortion is racist, is classist, is ableist, is gender based violence. We demand that everyone regardless of faith stand with us for reproductive freedom under the banner of bodily autonomy: we belong to ourselves.“

A true Christian who knows Scripture cannot justify abortion, nor can a follower of Jesus justify their participation or support in the democrat party, which celebrates depravity and is openly godless.

Conservative Christian podcaster, Allie Beth Stuckey, reminded her Twitter followers of this in her response to the music video, saying: “The organization Shout Your Abortion is pushing a Thank God for Abortion campaign. They have baby onesies that say ‘Pro-God, Pro-Abortion,'” Stuckey tweeted. “‘Pro-life Evangelicals for Biden,’ get to know your new coalition!”

The foul language and blasphemy fuelled video, was very reminiscent of the worship of the false god Molech in the Old Testament. A fact that was pointed out by Ken Ham in response to the video, saying the worship of abortion is “no different to the Canaanites who worshipped Molech, a god associated with child sacrifice.”

The worship of Molech was particularity egregious and received specific warnings by God, who hates the shedding of innocent blood (Proverbs 6:16-19), in the Old Testament:

Leviticus 18:21 KJV – “And thou shalt not let any of thy seed pass through the fire to Molech, neither shalt thou profane the name of thy God: I am the Lord.”

Psalms 106:38 KJV – “And shed innocent blood, even the blood of their sons and of their daughters, whom they sacrificed unto the idols of Canaan: and the land was polluted with blood.”

Ken Ham called the video, which he urged everyone not to watch, blasphemous, evil, sacrilegious, perverse, and depraved. Still, he explained that what it is “is an illustration of where many in the younger generations are heading.”

“We need to pray for these depraved people and pray for this nation,” he added.