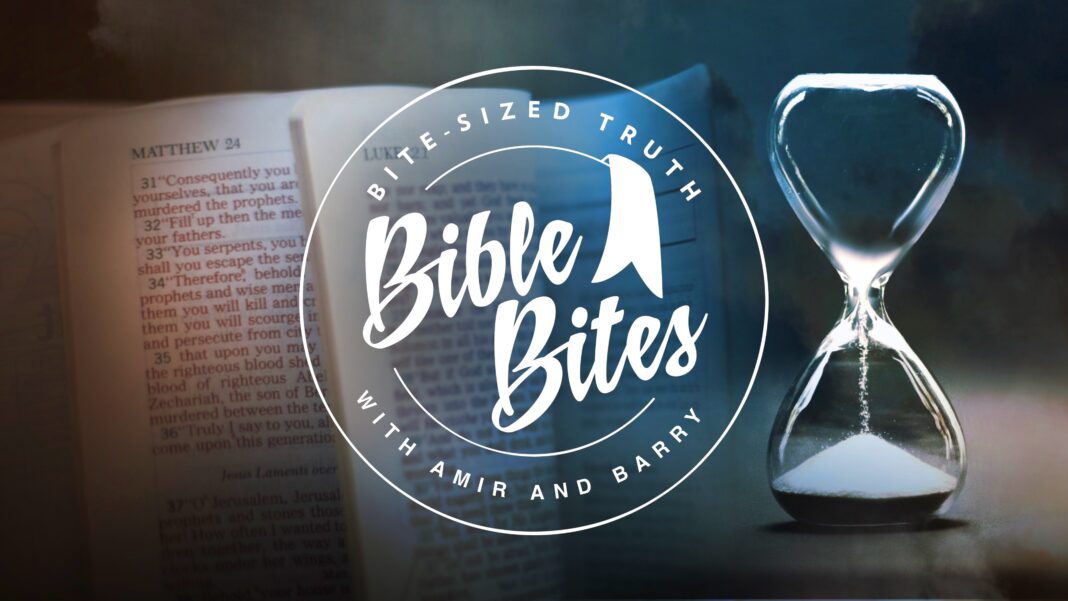 “Paul wrote in Galatians 4:4-5, “But when the fullness of the time had come, God sent forth his Son, born of a woman, born under the law, to redeem those who were under the law, that we might receive the adoptions as sons.” The fullness of time talked about here is referring to God’s appointed time. He’s not working by our schedule. He’s asking us to be patient for His time to come. In the meanwhile, we are to be ready and let Him do the rest.

Ezekiel 30:3 KJV – “For the day is near, even the day of the Lord is near, a cloudy day; it shall be the time of the heathen [Gentiles].”

Habakkuk 2:3 KJV – “For the vision is yet for an appointed time, but at the end it shall speak, and not lie: though it tarry, wait for it; because it will surely come, it will not tarry.”

1 Peter 4:17 KJV – “For the time is come that judgment must begin at the house of God: and if it first begin at us, what shall the end be of them that obey not the gospel of God?”

Our amazing God has not only arranged and ordered all things in the universe, He has ordered all things within His universe in their appointed times. We are living in the time of the Gentiles presently, and soon the world will return to the time of the Weeks of Daniel when the church is raptured and the 70th week is fulfilled. Habakkuk was told that the vision he had seen of the coming Babylonian Empire was for an appointed time.

In the New Testament, Peter wrote that the time had come for judgment to begin at the house of God. Paul wrote in 2 Timothy 3:1 that in the last days perilous times will come. He later said in 2 Timothy 4 that a time would come when men would not endure sound doctrine.

Matthew 24:32-34 KJV – “Now learn a parable of the fig tree; When his branch is yet tender, and putteth forth leaves, ye know that summer is nigh: So likewise ye, when ye shall see all these things, know that it is near, even at the doors. Verily I say unto you, This generation shall not pass, till all these things be fulfilled.”

The time of the Gentiles has lasted over two millennia. It began with the reign of the Babylonian Empire under Nebuchadnezzar and continued with those who followed him. The perilous times where sound doctrine is not endured is a period specific to the end of the church age. In the Olivet Discourse, Jesus spoke of a single generation that would see all that He predicted coming to pass. Then He says that there is one day and one hour when the Son of Man would finally make His return. Paul later reduced the duration of that day and hour to a twinkling-of-an-eye moment. (1 Corinthians 15:52)

If we examined these few markers in time from Scripture, we could see that they resemble a countdown with a flurry of events happening in quick succession near the end.

Revelation 1:1 NKJV – “The Revelation of Jesus Christ, which God gave Him to show His servants—things which must shortly take place. And He sent and signified it by His angel to His servant John.”

The word translated as “shortly” means “in quick succession”. “Sent and signified” means “to show by signs and symbols”. In other words, the book of Revelation tells us when time is running out events will happen quickly. Revelation moves from the church age in chapters 2-3, to the 70th week of Daniel in chapters 6-19, to the Millennium in chapter 20, and to the Great White Throne judgment and eternity in chapters 21-22.

Our God is a God of order. He has a pre-determined moment in time, lasting no longer than it takes for an eye to twinkle, that He has ordained for His Son to meet the church in the air, along with the dead in Christ. That time is at hand. Yes, the rapture is always imminent. But with Jews back in the land of promise, a widespread defection from truth happening in the church, and the perilous times that are upon us, we could say that it is more imminent than now than ever before.

Jesus said to be ready for His coming, and the truth is we have to be prepared now because when He comes for us there will be no time to get ready.

If you are unsure of your salvation, now is the time to get ready. If you are living as a prodigal, eating at the pig trough of the world instead of the fatted calf of the Father’s house, it’s time to come home.

While no man knows the moment of the rapture of the church, we do know that one morning we will awake to the day when in a twinkling of an eye the time of the Gentiles and the church age is going to end. Yes, people will get saved during the tribulation, but they will die for their faith under the reign of terror of the Beast. If you can’t live for Jesus now, what makes you think you will be able to die for Him then?

Don’t wait! Today is the day of salvation, for our salvation from this world is nearer today than it has ever been before.