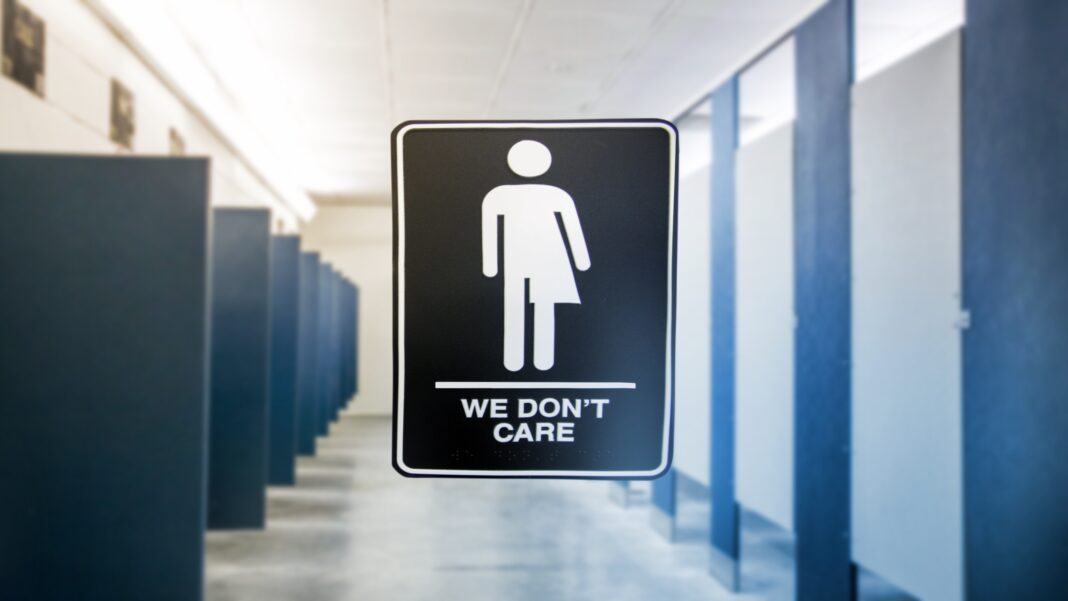 For Scott Smith, it was unimaginable. Standing in the Stone Bridge High School office, blind with rage, he demanded they call the police. They finally did — on him. “I went nuts,” he remembers. “…Six cop cars showed up like a… SWAT team.” Later that night, after a hospital rape kit confirmed what his daughter had insisted all along, the school’s principal sent out an email explaining the incident with Scott — never mentioning what had happened to his daughter and where. Even when the attacker was formally charged, administrators kept quiet.

A month later, at a local school board meeting, Smith — like a lot of parents — sat in shock as the new superintendent responded to the fury over Loudoun County’s radical transgender policies by insisting that nothing harmful had ever come of them. “To my knowledge,” Scott Ziegler said, “we don’t have any record of assaults occurring in our restrooms. It’s important to keep our perspective on this,” he went on. “We’ve heard it several times tonight from our public speakers, but the predator transgender student or person simply does not exist.” Smith was irate and tried to debate the point but was hauled out of the meeting by officers and charged with disorderly conduct. “I don’t care if he’s homosexual, heterosexual, bisexual, transsexual. He’s a sexual predator,” he argued.

Afterward, Smith and his family tried to stay out of the public eye. That proved impossible last week when another bombshell dropped. Not only did the “predator transgender student” exist, he went on to attack again — this time at another school. Two and a half miles from the place where his daughter had been held and violated, a different girl was brutally victimized. “If someone would have sat and listened for 30 seconds to what Scott had to say,” the family attorney said, it could have been prevented. Instead, Loudoun County, whose extreme policies made the abuse possible, tried to cover up the rape — leaving thousands of daughters vulnerable to boys just like this one.

Scott Smith says it’s the most helpless he’s ever felt. “It has been so hard to keep my mouth shut and wait this out. It has been the most powerless thing I’ve ever been through,” he admitted. Other parents, aghast at the district’s negligence, have turned out in mass to blast the county leadership. “I’d rather save one girl from sexual assault than be politically correct,” one woman insisted.

Meanwhile, the Biden administration — sensing the national uprising is only growing — has decided to try to drive parents like Scott underground. Desperate to contain the uproar in local districts, the DOJ (egged on or in concert with the National School Board Association) is threatening to treat outspoken citizens like “domestic terrorists,” citing the arrest of Scott Smith for speaking out against the assault of his daughter as an example in their six page letter.

Outraged, 60 members of Congress pushed back, demanding an explanation from Attorney General Merrick Garland for how it could possibly be legal to treat concerned parents as criminals for exercising their constitutional rights. “While some of these meetings may get heated, most of the parents who have been attending these meetings have simply voiced their passions and concerns for their children and their futures,” they wrote. “While we agree with you that any threat of violence against these government officials should be condemned and investigated, no government official has the right to claim that a citizen may not speak out against government policies.” And yet, the NSBA in a letter to Garland, claims opposing the president’s wildly dangerous transgender agenda is tantamount to a public “hate crime.”

Politically diverse states like Louisiana and Virginia were horrified and publicly denounced the organization for “discouraging active participation in the governance process.” Separately, both chapters said they weren’t consulted about the letter to the DOJ and went out of their way to say the National School Board Association did not speak for them. Others have told news outlets that they’re even reconsidering their alignment with the national association. The debates taking place may be challenging, they agree, but they’re also necessary.

On what authority, Rep. Matt Rosendale (R-Mont.) asked, is the federal government even intervening in the first place? They don’t have supervision over local school boards — and yet, the “Department of Justice is [going] into the local school districts to basically intimidate parents from getting involved in what their children are going to be taught? It’s very disturbing and troubling to me.” As it is to all parents, who are starting to see Washington’s heavy-handed education policy infused in their districts from the top down. When did it become the FBI’s job to investigate parents for speaking up at local board meetings, they want to know? It didn’t. This is just a desperate move by the Left to intimidate parents into silence so they can continue the indoctrination of children.

“From where I sit,” Rosendale said on Monday’s “Washington Watch,” “what this looks like is just another tactic of the Biden administration to completely silence those who might question what they’re trying to do. And I don’t think that there is a more important obligation for parents than to make sure that they are involved in how their children are being educated and what they’re being taught.”

So what can people do? Well, for starters, you can get your local school board on the record about whether they agree with the National School Board Association’s claims. (FRC Action even has a sample letter you can use.) Then, ask whether your state or community is a member of the NSBA. Is your district paying dues to the National School Board Association? Because if you are, you’re facilitating this type of attack on parents.

Maybe you don’t have children in the public schools, so you think this call to action doesn’t apply to you. But let’s face it: every one of us is a taxpayer, and organizations as radical as the NSBA shouldn’t have the ability to fight parents using our own dollars. Beyond that, this is an opportunity to hold the people we elected to represent us accountable. These school boards don’t just serve the families who have kids in school — they serve the entire community. So every one of us can — and should — show up to these meetings and demand the truth about what’s happening behind classroom doors.

Because, as Scott Smith will tell you, it might not spare his daughter — but it could spare someone else’s.

One of the pro-transgender parents on the opposite end of the debate rebuked parents like Scott Smith, who he described as being filled with “hate,” which was “dripping from the followers of Jesus in [the] room.”

Board members had sought intervention from the police, who were present, when the meeting became loud and tempers began to rise. The board warned that the meeting would end early after parents opposed them on the issues of CRT and transgender accommodations.

Later, after a speaker berated board members for suspending one of their teaching staff after he spoke out against proposed “transgender” policies at an earlier meeting, eliciting loud cheers, the board abruptly ended the meeting.

Some parents who hadn’t yet had the chance to speak attempted to voice their concerns, at which point the board deemed the meeting an “unlawful assembly.”

Two arrests were then made, one of which was of Smith, whom the police handcuffed and dragged along the floor as they ushered him out of the building.

“If someone would have sat and listened for 30 seconds to what Scott had to say, they would have been mortified and heartbroken,” Smith’s attorney, Elizabeth Lancaster, said.

In an interview with Laura Ingram, Smith said that he wasn’t at the school board meeting to be “bigoted,” as some claim, insisting he went to the meeting “to find out why our children aren’t safe.”

“The next thing I know a parent/activist approach my wife and started antagonizing her. I turned around and said ‘stop.’ then I tried to tell the lady what happened to my daughter,” the father told Fox News, adding that the activist then stated that no assault had taken place and began to threaten to ruin the father’s business.

“She started in on me against and threatened my family business, my livelihood, everything that gives my family what we need. She threatened to ruin my business on social media,” he described, further explaining that “all of a sudden” he was being arrested and “tackled to the ground” by police.

“I am just shocked and horrified,” he said before clarifying that he is a supporter of law enforcement.

This is what happens when society calls “good evil and evil good.” As the Bible records in Isaiah 5:20, God says “Woe” unto those who put “darkness for light and light for darkness.”

Life Site News in their article, “Transgender bathrooms causing plague of girls afraid to use toilets at school,” reported:

“It is awful enough that so many children are being confused by the gender-fluid ideology introduced to them in schools, and that so many of them are beginning to believe that they were born into the wrong bodies,” they wrote. “But now, it is often children who are being hurt and disturbed by the new social experiment that adults are imposing on them who are forced to push back against this lightning-fast social trend.”

“Delusional adults may have entirely forgotten the natural order of things, but children live with the reality of the world as it is, not as a handful of incredibly powerful and influential activists wish it to be,” Life Site continued. “As always, it is the guinea pigs who are so often damaged and destroyed by the experiment.”

God created mankind in His image. He created us to be male and female (Genesis 1:27). This is also confirmed by science. When schools adopt these dangerous policies, which are tantamount to child abuse, they demonstrate that they have wholeheartedly rejected God and are setting your children up to do the same.