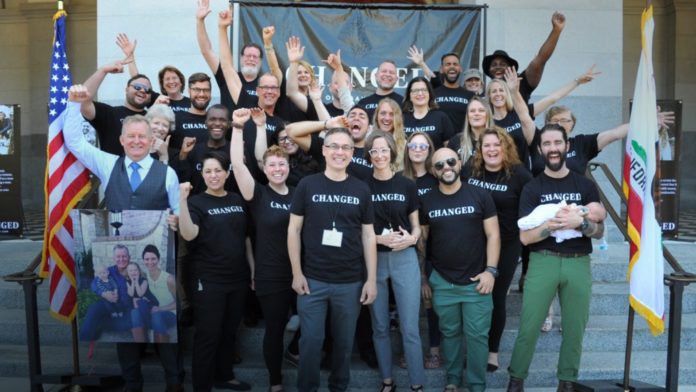 Eighteen former LGBTQ+ individuals held a press conference on Capitol Hill Oct. 30. Their message to Congress and the media: Homosexuals and transgender people really can change.

As members of Changed, a community of people who once identified as LGBTQ+ and have left the homosexual lifestyle, the group shared the catastrophic impact legislation like the Equality Act and the Therapeutic Fraud Prevention Act would have on those seeking a way out of both homosexuality and transgenderism, and for those ministering to them.

“[If these bills take effect] we’re imposing an ideology that would perpetuate emotional brokenness on a generation,” said Elizabeth Woning, co-founder of Changed. “What will happen when it becomes illegal to suggest there’s another narrative, which is what [the Equality Act] would do? It would stifle the voice of every Christian pastor to share the full Gospel. … [There would be] no opportunity for dissent.”

On Tony Perkins’ Washington Watch, Janet Boynes, founder of Janet Boynes Ministries and a member of Changed, shared her testimony. Boynes, a former lesbian, experienced sexual assault as a child. Eventually, she walked away from her faith and tried to fill the void with food, drugs and other women. But one day, she met a Christian woman in the grocery store who invited her to church. Two weeks later, she went to church and rededicated her life to the Lord.

“There are Christians that walk away from their faith to go into the homosexual lifestyle,” Boynes explained. “But God said, ‘When I have 100 sheep, I’ll leave the 99, and I’ll come after you.’ And God came after me.”

While Boynes was at the Capitol last week, she had a chance run-in with Speaker Nancy Pelosi. She briefly talked with Pelosi and gave her a book full of testimonies like hers.

“I hope she takes the time to read it,” said Boynes. “… We’re being silenced because we can debunk what [the Left is] saying. They will not sit down and debate any of us that have come out of the life of homosexuality, because we can challenge their ideology. I am a living example that change is possible through the power of God.”

“God is meeting LGBT people,” Woning added, “sharing with them that He loves them, calling to them with wholeness and meeting their deepest needs for intimacy.

When asked how Christians can reach out to members of the LGBTQ+ community, Woning responded, “Just love them.”

1 Corinthians 6:9-11 KJV – “Know ye not that the unrighteous shall not inherit the kingdom of God? Be not deceived: neither fornicators, nor idolaters, nor adulterers, nor effeminate, nor abusers of themselves with mankind, Nor thieves, nor covetous, nor drunkards, nor revilers, nor extortioners, shall inherit the kingdom of God. And such were some of you: but ye are washed, but ye are sanctified, but ye are justified in the name of the Lord Jesus, and by the Spirit of our God.”