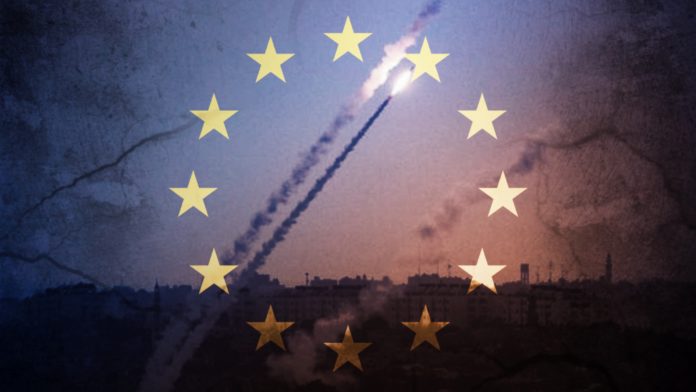 Two days after terrorists in Gaza fired rockets into Israel, the European Union on Sunday evening condemned the launching of projectiles against civilians as “unacceptable,” saying the practice “must stop immediately and unconditionally.”

“The priority should be to work on immediate de-escalation to protect civilian lives,” the statement continued. “Israelis and Palestinians both have the right to live in peace, security and dignity. Only a political solution can put an end to the violence.”

Gazan terrorists shot 10 rockets at Israel on Friday, damaging a home but causing no injuries. Israel hit back with retaliatory airstrikes on Hamas targets, in the latest round of on-again, off-again violence that has plagued the region for years.

The high-level security cabinet met for over four hours Sunday, as ministers considered options for confronting the violence from the Gaza Strip.

Top-level ministers at the security cabinet meeting assessed that the current round of fighting was over, Channel 12 news reported, even as some leaders predicted that wider violence and a large-scale Israeli operation were only a matter of time.

It was the third meeting of the high-level forum since September’s elections, which failed to give a conclusive result to end the ongoing political deadlock that has left Prime Minister Benjamin Netanyahu leading a caretaker government for 10 months.

According to the report, Israeli officials believe Gazan terror groups are uninterested in ratcheting up violence out of fear it will impede the transfer of funds from Qatar as well as various humanitarian projects in the Palestinian enclave.

Channel 13 news also reported that the army was attempting to avoid any increase of violence with Gaza while it is trying to focus on threats along the northern border.

Although ministers discussed increasing military action against Hamas and other terror groups, they also reviewed the option of easing some of the restrictions on the territory to improve humanitarian conditions, while reserving the threat to cancel the benefits if rocket fire continues.

Israeli authorities, though, have warned that they could pursue a wider confrontation with Gaza to stem the border violence, including a possible ground operation, amid public pressure from residents of the rocket-scarred south.

At the opening of the weekly cabinet meeting in Jerusalem on Sunday, Netanyahu said he holds Hamas responsible for any attacks emanating from the Gaza Strip, but would not divulge his plans for dealing with the situation.

At the same time, the military began deploying air defense batteries out of fears that the rocket fire could expand.

There has been no claim of responsibility from Gaza for the rocket fire, but Israel routinely holds Gaza’s Hamas rulers responsible for any violence emanating from the Strip.

There have been repeated bouts of violence between Hamas and Israel over the past year, as the Islamists have sought to improve on the terms of a UN- and Egyptian-brokered truce first hammered out in November last year.

In return for Hamas silencing the rockets, Israel agreed to a package of measures to ease the crippling blockade it has imposed on Gaza — together with Egypt — for more than a decade, since Hamas, which openly seeks Israel’s destruction, took over the territory in a bloody coup. Israel maintains the blockade is necessary to prevent arms from entering Gaza that could be used to attack the Jewish state.

The measure included allowing in millions of dollars in aid from Hamas ally Qatar to pay for fuel for the territory’s sole power station and cash for salaries and grants to tens of thousands of needy families.

The truce has also seen Israel expand the distance it allows Gaza fishermen out into the Mediterranean — although it reduces it or even cuts it to zero in response to violence from the enclave.

We encourage our readers to Download the “Red Alert Israel” App onto your Mobile Devices. The Application will notify you when rockets sirens go off in Israel. Turn on your Notifications.

When the alert goes off and you receive a notification, please stop, take a second to Pray for Israel and the Protection of its citizens.