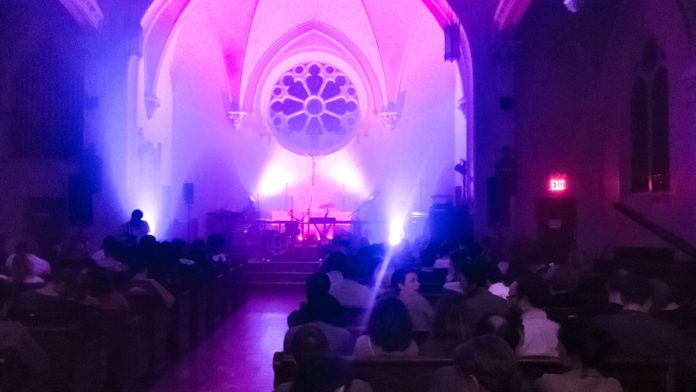 Drag Queen Story Hour is a phenomenon that has been making libraries a cultural battle ground as it spreads across the nation but the progressive left has found new allies for promoting such events – the church.

The Park Church, a Lutheran ministry in Greenpoint, Brooklyn held it’s first Drag Queen Story hour this week with Drag Queen “The Rev. Yolanda” who is known for her “Church With A 2 Drink Minimum” slogan at various spiritual events.

Following the song “God Welcomes All” by the church choir, Sparke Leigh walked up on stage and called the children up to sit at his feet.  Rather than reading from the Bible, he read the book Pride: The Story of Harvey Milk and the Rainbow Flag.

The Ames United Church of Christ in Iowa held a drag event which assured parents that there would be “adult supervision” for the drag queen and king contest as the youngsters dressed in drag and paraded around, skirting the legal line of child sexual abuse. With every step the church is working to recruit more teens and preteens into LGTB lifestyle.

In First Congregational United Church of Christ of Portland, under Minister Michael Ellick, an event was held called “Drag me to Church” which featured a cabaret group called “Caravan Of Glam” to perform, with the donations going to a local LGBTQ community center.

The First Church Somerville UCC in Somerville, Massachusetts held a multi-day celebration of the transgender lifestyle that includes the pastor delivering a LGBTQ-focused sermon interspersed with so-called gospel music and followed by church members, both children and adults, cross dressing as they eat brunch.

Just what impact is such events having on our children in the church?

They are confused as they see the church reconfirming the message of the world that you can identify as whatever you want to be and such choices should be celebrated and even promoted in the church.

The UK’s mirror newspaper recently featured the story of a 7-year-old child who had recently ‘transitioned’ and the mother commented how important the Anglican church’s transgender ‘rebaptism’ ceremony was in affirming this change by calling the child by their new name.

The Rev Kelvin Holdsworth, Provost of St Mary’s Cathedral in Glasgow would be proud of such moments, as he previously urged people to pray that Prince George is gay in order to make the Church of England more inclusive.

Earlier this year, Anglican clergy urged the British government to ban so-called “conversion therapy” for those with gender dysphoria, and announced their intention to attempt to recruit transgender clerics.

It should not surprise us that the youth are following the example of Church leadership.

The congregation of St. Matthew Trinity Lutheran Church in Hoboken, New Jersey now refer to their pastor as Peter. ‘Peter’, formerly Rose Beeson, was the center of one of the first renaming ceremonies in the Evangelical Lutheran Church in America.

The ceremony, according to witnesses, was conducted in the same style as a christening or baptismal ceremony with the bishop blessing Beeson and pronouncing her newly-chosen name.

Methodist Deacon M. Barclay is now accepted by his church as a non-binary Deacon in Chicago, which means that she prefers the pronoun “they” rather than “she” and doesn’t identify as either gender.

The list goes on and on as many churches abandon their first call to the Gospel and trade the Word of God for the message of progressive Leftism as they embrace and promote the prevalence of gender confusion.

Berean Review: Children In The Crosshairs