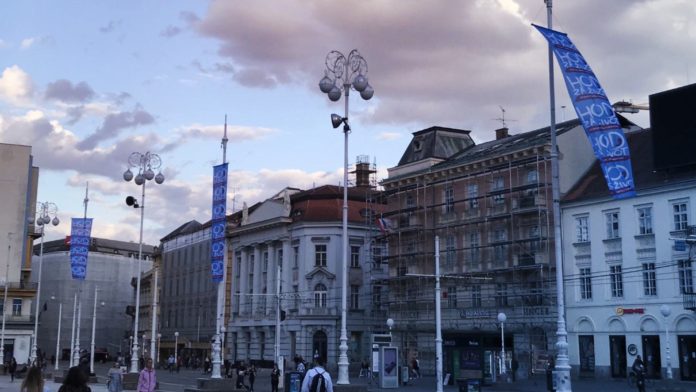 EU-sponsored activists have responded with fury after LGBT ‘pride’ flags flown in the Croatian capital were replaced with pro-life banners.

Flags marking the anti-abortion March for Life, which was postponed due to the novel coronavirus, were erected in Zagreb on Sunday, to the anger of LGBT activists.

Zagreb Pride tweeted that authorities in the city “have decided to replace the rainbow-coloured flags, symbols of diversity and love, with March flags wanting to ban women from making decisions about their bodies”.

Posting photographs of the capital city, the group complained that March for Life flags are “very expensive” and tweeted a link to its donations page, which tells readers to “be on the right side of history and support us”.

On its website, Zagreb Pride — a self-proclaimed “queer feminist and anti-fascist association” — says that it receives funding from Hungarian billionaire George Soros’s Open Society Foundations as well as the governments of Sweden and the U.S.

In addition, it reveals that EU taxpayers are paying for Zagreb Pride to carry out the project “Diversity and Childhood – Changing social attitudes towards gender diversity in children across Europe”, taking place across nine European countries.

Organisers for the March for Life said that the pro-life event would take place later in the year, when the public health situation improves, telling local media: “Flags were flown yesterday, but the [event] will not take place in May.”

On Wednesday, the left-green coalition of the Workers’ Front, We Can!, Zagreb is OURS, and the New Left slammed the move to replace LGBT ‘pride’ flags with banners in support of life.

The parties, which are running as a coalition in upcoming parliamentary elections, accused Zagreb mayor Milan Bandić of sending a message to conservative voters that he will be their “protector” and support their events, according to Croatian media.

Danijela Dolenec from We Can! argued that authorities should not cooperate with pro-life initiatives, claiming that they “trample on women’s rights and on LGBT people”.

Katarina Peović, from the Workers’ Front, added that the problem was not in the removal of rainbow flags alone but in treating these — which she claimed represent “tolerance, human rights, LGBT rights, and women’s right to abort” — as equal to banners representing “the Hate and Intolerance Walk, which is something we should condemn”.

“This kind of equivalence obviously wants to say that tolerance and intolerance are the same,” she said.