The South Bay Pentecostal Church’s attorneys had asked the high court to issue an emergency injunction against the ban.

The new guidelines Newsom’s just issued might still face some opposition from religious leaders.  For one thing, these guidelines state places of worship must “limit attendance to 25% of building capacity or a maximum of 100 attendees, whichever is lower.”

And Newsom isn’t forcing these guidelines on California’s counties.  The guidelines suggest houses of worship first need the approval of their county’s public health department before they can hold in-person services.

Before Newsom issued the new guidelines, one of the Chula Vista church’s attorneys, Tom Brejcha of the Thomas More Society, pointed out California’s two-month-long ban on in-person services, “Is a blatant violation of the Free Exercise Clause of our First Amendment.”

Brejcha stated he’d still like to see the high court get involved, saying, “We still need the United States Supreme Court to weigh in on this critical matter to ensure that state or local officials refrain now and forever from governing by decree to curtail constitutional rights.”

Friday evening, a three-judge panel of the 9th Circuit U.S. Court of Appeals upheld the California church ban in a two-to-one decision. The 9th Circuit is often considered the most liberal of the circuit courts of appeals and is also the most overturned by the U.S. Supreme Court.

Could Convert the ‘Bill of Rights into a Suicide Pact’

The two judges ruling against the Chula Vista church declared in their three-page decision, “We’re dealing with a highly contagious and often fatal disease for which there presently is no known cure.  In the words of Justice Robert Jackson, if a ‘court does not temper its doctrinaire logic with a little practical wisdom, it will convert the constitutional Bill of Rights into a suicide pact.’”

But Judge Daniel Collins said in a fiery 15-page dissent, “Warehousing and manufacturing facilities are categorically permitted to open, so long as they follow specified guidelines.  But in-person ‘religious services’ – merely becausethey are ‘religious services’ – are categorically notpermitted to take place even if they follow the same guidelines.”

Before Newsom released the new guidelines allowing religious services, California suggested there is too much risk that congregants wouldn’t follow safety rules.

In his dissent, Collins said, “…the State’s position on this score illogically assumes that the very same people who cannot be trusted to follow the rules at their place of worship can be trusted to do so at their workplace: the State cannot assume the worst when people go to worship but assume the best when people go to work or go about the rest of their daily lives in permitted social settings.”

Newsom may have bowed to the inevitable.  Before his Memorial Day release of the guidelines allowing services, more than 1,200 religious leaders in California had declared they’ll take this matter into their own hands and hold services on Pentecost Sunday, May 31st no matter what their state ruled permissible.

These leaders signed a “declaration of essentiality” insisting their religious services are essential.  They also ensured that they will practice safety measures at those services such as social distancing.

He also stated, “The people are demanding to go to church and synagogue, go to their mosque.  Millions of Americans embrace worship as an essential part of life.”

Pressure was on Governor Newsom not only from those more than 1,200 California religious leaders and President Trump but the U.S. Justice Department.  The head of its Civil Rights Division sent a letter to Newsom last week warning him he’s discriminating against houses of worship.

In that letter, Assistant Attorney General Eric Dreiband declared, “Religion and religious worship continue to be central to the lives of millions of Americans.  This is true now more than ever.”

Newsom Speaks of Influence of Faith on His Own Life

A couple of days later, Newsom had some positive words for people of faith at a briefing about California’s fight against the coronavirus.

“It’s so important that folks understand that we deeply respect and admire the faith, devotion, and the cause that unites millions and millions of Californians – people of faith and community,” Newsom said.

He added, “At a time of so much anxiety and uncertainty, faith and that devotion to something higher, bigger and better than yourself becomes more pronounced and even more profound and more important.”

He spoke of his own Catholic family and schooling, and said: “I often reflect on how impactful the Jesuits were in terms of my upbringing.” 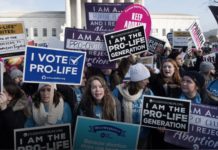 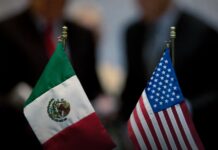 US, Mexican presidents meet at White House to talk USMCA, without Canada