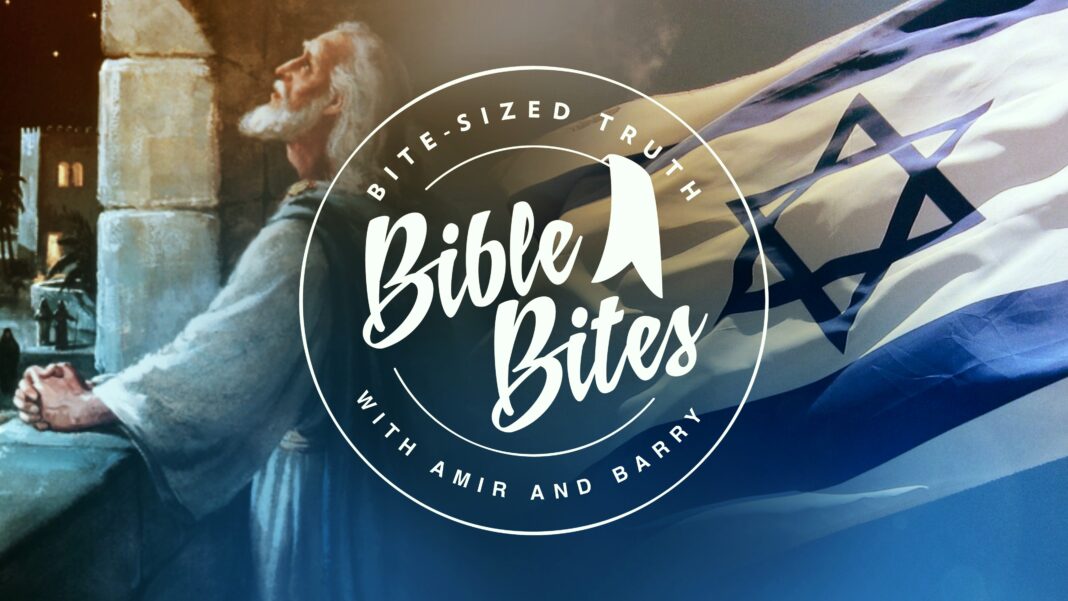 God wants to get your attention. He’s using His nation over there to tell you, “I love you. In the same way I love Israel, now you are my people. You who were once not my people are now my people. And I called you, also, from bondage, to the freedom that we have in Christ.” From darkness into His marvelous light. But you cannot find that light unless you believe, and put your faith in the finished work of Jesus on the cross, who came to die for you. He’s the King of Israel. He will come to save Israel, but He came 2000 years to save you. You are the Gentiles, you are now brought forth close to God, only if you accept Him.”

One of the many tragedies of the belief in Replacement Theology is that it robs its constituents of seeing so many wonderful aspects of God’s nature and character portrayed through the nation of Israel. First and foremost, it calls into question the inerrancy of scripture. If God chose Israel but was going to cast them aside for their rejection of His Son, why would He have inspired Daniel to write:

Daniel 9:24-27 KJV – “Seventy weeks are determined upon thy people and upon thy holy city, to finish the transgression, and to make an end of sins, and to make reconciliation for iniquity, and to bring in everlasting righteousness, and to seal up the vision and prophecy, and to anoint the most Holy. Know therefore and understand, that from the going forth of the commandment to restore and to build Jerusalem unto the Messiah the Prince shall be seven weeks, and threescore and two weeks: the street shall be built again, and the wall, even in troublous times. And after threescore and two weeks shall Messiah be cut off, but not for himself: and the people of the prince that shall come shall destroy the city and the sanctuary; and the end thereof shall be with a flood, and unto the end of the war desolations are determined. And he shall confirm the covenant with many for one week: and in the midst of the week he shall cause the sacrifice and the oblation to cease, and for the overspreading of abominations he shall make it desolate, even until the consummation, and that determined shall be poured upon the desolate.”

Daniel writes that seventy periods of seven years were determined. The word means “carved out,” for Daniel’s people, Israel, and their holy city, Jerusalem. He wrote that the Messiah will be cut off, meaning killed, but not for Himself, which means He will be killed for the sake of others. Then he leaps forward in time when he writes of the people of the prince who is to come, who confirms a covenant with many for the final week of the seventy periods of seven years. This is the Antichrist who arises from the revived Roman Empire during the Seventieth Week of Daniel, or as we know it, the Great Tribulation.

If Replacement Theology is true, then Daniel 9 is not, and Scripture is not inerrant, and modern Israel is not biblical Israel, as they claim. But Daniel 9 is true, and though there were nearly two millennia between the sixty-ninth week and the Jews being back in their national homeland (making the fulfillment of the seventieth week possible), we can now see without question the infalibility of the Word of God, including that which pertains to God’s chosen people, Israel.

Romans 10:20-11:2a KJV – “But Esaias is very bold, and saith, I was found of them that sought me not; I was made manifest unto them that asked not after me. But to Israel he saith, All day long I have stretched forth my hands unto a disobedient and gainsaying people. I say then, Hath God cast away his people? God forbid. For I also am an Israelite, of the seed of Abraham, of the tribe of Benjamin. God hath not cast away his people which he foreknew.”

If God casts away people whom He has chosen because they are disobedient and contrary (which means; to dispute), then most of us are in big trouble. Yet Paul does not deny Israel’s disobedience, nor does he refute their disputing nature when it came to the subject of Jesus. He instead mentions the faithfulness of God regarding His promises.

All of us have sinned since we were saved and we should be thankful that we have Israel as an example of God’s love and faithfulness, even to disobedient and disputing people. The Replacement Theologist would say, “But the Jews killed Jesus.” No, they didn’t. Jesus came into the world to die. And the Father so loved the world that He gave His Son to the cross the die for your sins and mine. The Jews didn’t kill Jesus. The Romans didn’t kill Jesus. Sin killed Jesus – yours and mine. That makes us complicit in His death. Should the Lord cast us away? Look to Israel and the answer is a resounding, No!

Israel has been referred to as “God’s timepiece.” In other words, we can watch the prophetic clock tick as we look at the nation of Israel. God said He would bring them back from nations to which He scattered them, and He did (Ezekiel 36:24). He said the world’s focus would turn to Jerusalem after He gathers His people, and it is (Zechariah 12:3). The Lord said He will fight against the nations who attack Israel “as He fights in the day of battle,” and He will (Zechariah 14:3).

None of those things can happen if Replacement Theology is true and the Bible is not inerrant. Thankfully, it’s not true. And thankfully, God is faithful to His people despite their disobedience and disputes with Him. Thankfully, God told us that when the Jews are back in the land that prophetic things are set in motion that will all be fulfilled within a single generation. We are living in that generation.

Jesus is coming for His church soon, and what is happening in Israel is proof.  Are you ready?