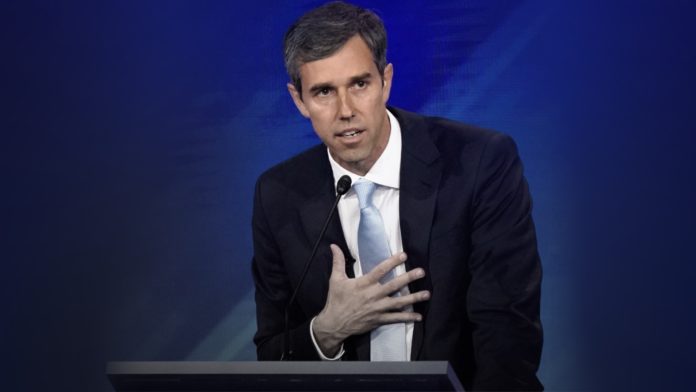 Texas Democrat Beto O’Rourke, one of nine Democratic presidential candidates to take part in CNN’s LGBTQ town hall event Oct. 10, found himself in hot water with conservatives after declaring that as president, he would revoke the tax-exempt status of religious institutions that don’t support same-sex marriage.

It all rose to the surface when asked by CNN moderator Don Lemon, “Do you think religious institutions like colleges, churches, charities—should they lose their tax-exempt status if they oppose same-sex marriage?” While fellow Democrat Sen. Cory Booker tactfully sidestepped the question earlier in the evening, O’Rourke, who ironically claims to be a Catholic, didn’t miss a beat. “Yes,” he said without hesitation. And the Los Angeles audience broke out in applause.

But not everyone is cheering O’Rourke’s blatant disregard of the First Amendment.

“These socialists in the Democratic Party are a threat to religious freedom and free speech,” Franklin Graham said on Facebook. “This would be a step toward silencing the voice of the church and the influence of Christian universities and organizations. This is what godless socialism did in Eastern Europe, shutting down the churches and imprisoning pastors who disagreed with the Communists. As for me, I will not bow down at the altar of the LGBTQ agenda nor worship their rainbow pride flag. I’m going to stand with the Word of God, the Holy Bible, which is truth from cover to cover.”

“This outright attack on religious freedom is disgraceful and should prompt an outcry from all advocates of true tolerance and diversity,” he wrote. “The vast majority of Americans recognize and cherish the freedoms that fortify the foundation of this nation. We should expect and demand our elected officials to do the same.”

“Those groups provide billions of dollars in essential social services to their communities,” he said. “Churches and ministries should be allowed to hold centuries-old beliefs without fear of government retribution.”

In fact, Kelly Shackelford, president and CEO of First Liberty Institute, cited a recent study by two Georgetown University professors called “The Socio-Economic Contributions of Religion to American Society,” in which faith-based organizations are proven to have significant positive impact on the American economy.

“O’Rourke’s idea is not only legally wrong,” said Shackelford, “it’s bad policy. According to a recent study, religion contributes an estimated $1.2 trillion to the U.S. economy annually—more than Google, Amazon, Apple, and Microsoft, combined. Beto O’Rourke’s threat is a direct affront to the constitutional guarantee of religious liberty. Should he, or any future president, attempt to violate the Constitution in such a way, First Liberty will once again be first in the fight to defend religious freedom.”

Following such outcry from religious conservatives, O’Rourke attempted to backtrack his statement, with his campaign emailing the online magazine Slate saying, “[Beto] would support revoking the tax-exempt status for a religious institution that fired an employee or refused to hire someone because they were in a same-sex marriage. He would not, however, revoke tax-exempt status for a religious organization he simply disagrees with.”

No word on whether the candidate comprehends that his plan would still jeopardize every religious institution, including many thousands of churches, that requires affirmation of essential Biblical doctrines from its employees.