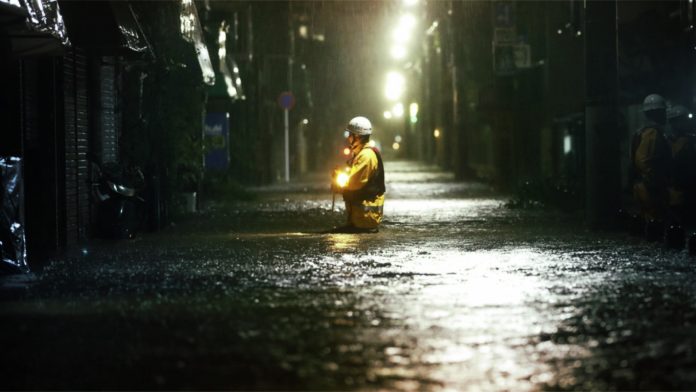 Powerful Typhoon Hagibis slammed into Japan on Saturday, killing at least two people and prompting authorities to issue their highest level of disaster warning over “unprecedented” downpours that caused flooding and landslides.

Around 7.3 million people were placed under non-compulsory evacuation orders and more than 30 people were injured, four seriously.

Even before making landfall, Hagibis caused enormous disruption, forcing the cancellation of two Rugby World Cup matches, delaying the Japanese Grand Prix and grounding all flights in the Tokyo region.

It crashed into Japan’s main Honshu island just before 7:00 pm (1000 GMT), barreling into Izu, a peninsula southwest of Tokyo, the Japan Meteorological Agency (JMA) said, packing gusts of wind up to 134 miles per hour around an hour.

The storm claimed its first victim hours before arriving on the when strong winds from its outer bands flipped a car in Chiba east of Tokyo and killed the driver.

But it was Hagibis’ torrential rain that prompted the JMA to issue its highest-level emergency warning for parts of Tokyo and the surrounding areas, warning of disaster.

Earlier, the storm forced the cancellation of two Rugby World Cup matches, disrupted the Japanese Grand Prix and grounded all departing flights in the Tokyo region.