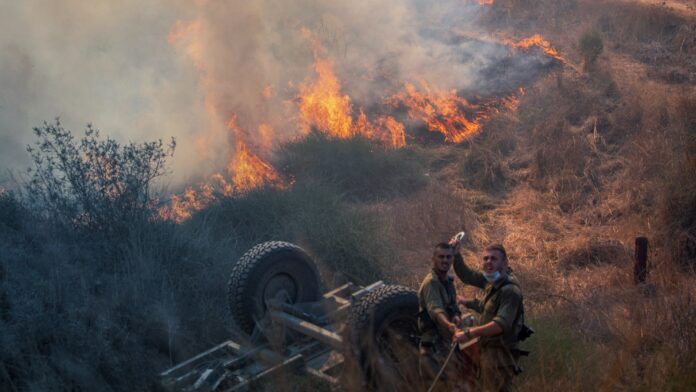 Airborne incendiary devices launched from the Gaza Strip sparked at least 23 fires in southern Israel on Saturday, a majority of them minor, according to Israel’s Fire and Rescue Services.

Fire investigators told Channel 13 that all of the fires were sparked by waves of arson balloons, where flammable or explosive devices are lofted into Israel from Gaza on actual helium balloons. Most landed in open fields, sparking brush fires that were put out by firefighters.

The fires came as Qatar’s envoy to the Hamas-run coastal enclave was in the Strip this week seeking to deescalate ongoing tensions between the terror group and Israel that have led to daily arson balloon and rocket attacks on Israel, and to IDF reprisal strikes. Mohammed al-Emadi is said to have left the territory briefly on Saturday afternoon to speak with Israeli officials before returning, according to Hamas-linked media.

Al-Emadi arrived in Gaza on Tuesday with $30 million in cash. The money is earmarked to help the territory of two million people, half of whom live under the poverty line, sources close to the envoy told AFP this week.

Palestinians in the Strip have, in recent weeks, sent waves of arson balloons across the border, sparking scores of wildfires in southern Israel.

According to Israel’s Fire and Rescue Services, this past week saw dozens of such incidents nearly every day. On Tuesday, 29 fires near border towns were sparked by the balloons. Those fires followed 36 on Monday, 28 on Sunday and 35 the day before.

On Thursday, the Israeli military conducted an initial bombing raid against Hamas facilities in Gaza in response to the balloon-borne incendiary and explosive devices launched across the border into Israel throughout Thursday.

This was followed by a launch of six rockets at southern Israel. They struck open fields, causing neither injuries nor property damage.

The military then responded with strikes on Hamas sites, including a weapons manufacturing facility.

On Saturday, the pro-Hezbollah Al-Akhbar newspaper reported that the military wings of terror organizations in the Gaza Strip were preparing for a long-term joint campaign against Israel. The newspaper also reported that the groups have now started to coordinate efforts to increase the number and frequency of incendiary balloons launched toward Israel.