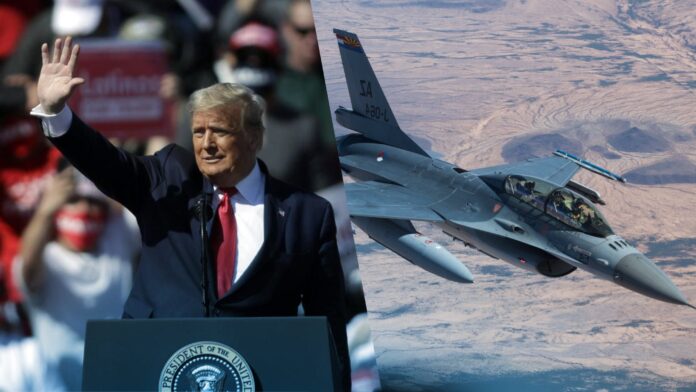 The North American Aerospace Defense Command (NORAD) said it dispatched F-16s, a type of fighter aircraft, and launched signal flares before establishing radio contact and escorting the plane out of restricted airspace “without further incident.”

NORAD said the general aviation aircraft was not in communication with Air Traffic Controls and entered the Temporary Flight Restriction area surrounding Bullhead City, AZ without proper clearance around 2 p.m. The aircraft was not initially responsive to intercept procedures, they added.

Trump, who addressed a crowd of supporters in the battleground state just six days before the election, saw the flares and pointed at the sky.

“Oh, look at that. Look, look, look,” Trump said, pointing at the sky. “Look at that. They gave the president a little display.” The crowd then chanted “USA, USA, USA!”

Trump then weaved the incident into his monologue, telling the crowd the plane is a fifth-generation F-35 Lightning II Joint Strike Fighter. He then asked rhetorically, “You know how hard it is to get Democrats to pay for that?”

Leo Hohmann: Gen. Flynn’s Warning to America: ‘If we Don’t get this Right, our Country is Done. It’s Over’

Leo Hohmann - November 30, 2020
Lt. Gen. Michael Flynn, appearing on the Worldview Weekend broadcast with Brannon Howse in his first interview since being pardoned by President Trump,...