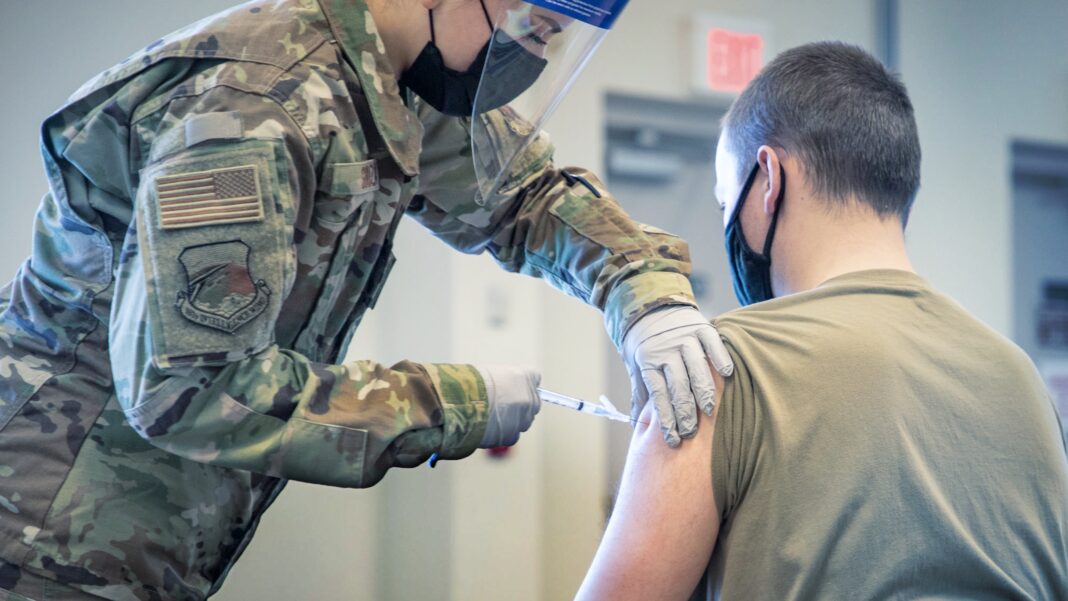 The Biden administration is trying to redefine the meaning of the word “immunity” in its attempt to force the Covid injection on 220,000 U.S. military service members who have already contracted and survived the SARS COV-2 virus that originated in Wuhan, China.

The Navy this week gave its sailors 90 days to get the shot and the Army and Air Force were poised Thursday to enforce their own timetables, reported Military.com.

The two plaintiffs, Daniel Robert, a 33-year-old drill sergeant at Fort Benning Army base in Columbus, Georgia, and Hollie Mulvihill, a 29-year-old staff sergeant at the Marine Corp base in Jacksonville, North Carolina, are asking the court for a temporary restraining order preventing the forced injections before a full hearing can be scheduled. They are ultimately seeking a permanent injunction and declaratory judgment against Biden’s Department of Defense.

The two defendants represent 220,000 other U.S. military active-duty members who have natural immunity and do not want any of the three synthetic gene-based “vaccines” shot into their bodies.

All three injections, manufactured by Pfizer, Moderna and Johnson & Johnson, are based on an all-new technology, never before used in any previous vaccine, and have never been tested for the long-term health effects on the human body.

The three shots combined have resulted in an unprecedented number of adverse reactions being reported to the government’s Vaccine Adverse Event Reporting System, including over 13,000 reported deaths, more than double the number of all the other vaccines combined since VAERS was established in 1990.

According to the lawsuit, Army Regulation 40-562 is the all-service publication that governs the administration of “Immunizations and Chemoprophylaxis for the prevention of infectious diseases.”

AR 40-562 clearly states that documented survivors of an infectious disease have a “presumptive exemption from vaccination due to natural immunity acquired as a result of having survived the infection,” the lawsuit states.

“General examples of medical exemptions include the following …Evidence of immunity based on serologic tests, documented infection, or similar circumstances.”

In fact, data exists that would suggest it’s the other way around – that natural immunity far exceeds that of vaccine immunity. A recent study out of Israel showed natural immunity is significantly stronger and lasts longer than the synthetic immunity delivered by the vaccines, protection from which even the CDC has admitted begins to wane after three to five months.

Yet, on the very same day that Diroir was playing up the importance of natural immunity on Fox News, Defense Secretary Lloyd Austin issued a memo mandating the entire Armed Forces be inoculated with the Covid shots.

In that memo, Austin created an all-new concept never before existing in the history of medical science and in complete contradiction to the plain language of the DoD’s own regulations. He said “those with previous COVID-19 infection are not considered vaccinated.”

The lawsuit states that the DoD regulation “contains no such term, nor concept, and the defendant Secretary of Defense’s new definition effectively wipes away the DoD’s own regulation. The secretary of defense is not a doctor, and this declaration has no basis in medical science at all, nor did this instant change to the regulation go through any notice and comment period, nor rulemaking process, nor any process at all. Indeed, the Secretary of Defense simply declared it without a scintilla of evidence to support it.”

Dr. Lee Merritt, a retired U.S. Navy surgeon, speaking at a White Coat Summit of America’s Frontline Doctors in July 2021, said more U.S. service members have likely died of the vaccine in 2021 than the combined total who died of Covid in all of last year. She stated at that conference:

“One of my big problems is our vaccination of the military. I was a 10-year Navy surgeon so I have Navy people and Army people calling me. There were only 20 deaths of all the active duty in 2020 for Covid, in all the services put together. They have a big epidemiological base and they can find out exactly what’s going on. There were only 20 deaths and we are vaccinating everybody. We’ve already had tumors and we’ve had 80 cases of myocarditis, which has a significant five-year mortality rate, I think it’s 66 percent… So, with the vaccination program we have ostensibly killed more of our young active-duty people than Covid did.”

Lawyers for the plaintiffs, led by Todd Callender in Denver, stated in the lawsuit that repeated attempts to leave voicemail messages for Austin in an attempt to settle the grievance out of court have been ignored by Austin, leaving them no choice but to file suit.

The lawsuit concludes: “On August 30, 2021, the plaintiffs filed a motion for an emergency restraining order in the form of a stay pendente lite, preventing the Defendant Department of Defense from inoculating them and anyone similarly situated that comprises the class of service members who can document that they previously had Covid-19 and as a result have developed natural immunity that exempts them from inoculation under AR 40-562.”

A lot of active-duty service members and their parents are pinning their hopes on this lawsuit.

If the lawsuit fails, it is feared that Biden’s Defense Department could try to up the stakes by dishonorably discharging those who reject the jab. So far, the Pentagon has stopped short of such threats and is allowing for religious exemptions.

A movement is afoot in the U.S. House where some lawmakers are getting behind legislation prohibiting dishonorable discharges for troops who refuse the Covid shot.

Legislation sponsored by Rep. Mark Green, R-Tenn., requires only honorable discharges for anyone who is separated from the military over rejecting the injection. It was added to the fiscal 2022 defense authorization bill, passed by the House Armed Services Committee on Thursday. [See Lawmakers Try to Ban Dishonorable Discharges for Troops Who Refuse Mandatory COVID-19 Vaccines, Sept. 2, 2021, by Travis Tritten, Military.com]

“No American who raises their hand to serve our nation should be punished for making a highly personal medical decision,” Green said in a statement.

Military.com reported on a Marine corporal who said she was discharged for refusing to wear a mask, possibly the first service member to be pushed out of the military in connection with COVID-19 rules.

According to the Pentagon, roughly 63 percent of all U.S. forces had received at least one dose of the controversial vaccine as of Aug. 18.

Many have stated that Christians, specifically, have a responsibility to stand against such mandates.

“Christian churches already have a track record of folding under pressure last year, closing doors and conforming to secular government mandates, ordinances, and double standards. We failed the Covid test,” he lamented. “One reason we have not successfully fought to maintain our freedoms is a faulty understanding of Romans 13 and we have been told our rights come from the state, not God.”

“Will the true church stand united to love our governing authorities by telling them they have gone beyond their mandate and are taking the place of God by seeking to bind the conscience of the people?” he questioned. “How will the church respond to further government force, Hollywood and big tech marketing, and media manipulation?”

“Who will be the conscience of the nation, and the voice of truth if not for the church of Jesus Christ?” Fiorazo urged. “If you desire to be a witness for the Lord Jesus Christ and the gospel, you will oppose mandatory vaccines. You will oppose it because it is contrary to God’s design and boundaries he has established for human governments. We will render to Caesar what is Caesar’s, but our bodies belong to the Lord as temples of the Holy Spirit, therefore glorify God in your body. (1 Cor. 6:19-20)”