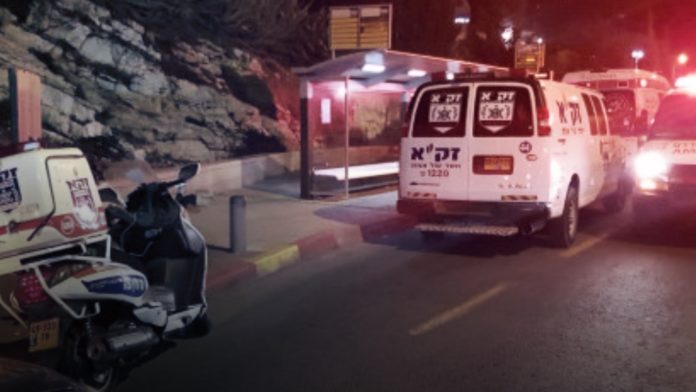 The terrorist who carried out a ramming attack in Jerusalem during the early hours of Thursday morning was arrested by Israeli security forces on Thursday evening.

“Following an extensive IDF operational and intelligence effort in cooperation with the ISA, Israeli police and other special units, the forces arrested the terrorist who carried out the terror attack in Jerusalem this morning,” the IDF Spokesperson’s Unit stated on Thursday evening. “The terrorist was taken for interrogation.”

The terrorist was named as 24 year-old Khaled al-Tourman from east Jerusalem’s A-Tur neighborhood.

Twelve Israeli soldiers were wounded in a vehicular ramming attack in central Jerusalem just before 2 a.m. The Golani soldiers passing by the First Station, a popular entertainment spot on the city’s David Remez Street, during a heritage tour ahead of their swearing in ceremony at the Western Wall.

IDF Spokesperson Brig.-Gen Hildai Zilberman said that they had been walking on the sidewalk when the vehicle came from behind and struck them at high speed. The soldiers were not able to shoot at the driver before he fled the scene of the attack.

“This happened in seconds,” Zilberman said.

One of the soldiers, aged 20, was evacuated in critical condition to Shaare Zedek Medical Center. The others were lightly injured and evacuated to hospital.

The suspect’s car was found near Beit Jala, sparking a manhunt throughout Thursday.

Shaare Tzedek Medical Center said in a statement that the critically wounded individual suffered from multisystem trauma and was sent to the operating room after undergoing diagnostic procedures.

“One of the injured was in a critical condition, and after having surgery, he is in a stable condition but you cannot say that his life is not in danger anymore. The other four are expected to be released later today,” Dr. Alon Schwartz, head of the trauma department at the hospital told KAN.

Overnight, IDF forces in conjunction with Border Police destroyed the home of terrorist Ahmed Kunbe in the Palestinian refugee camp of Jenin overnight.

Kunbe was a member of a cell that was involved in a shooting attack that killed Rabbi Raziel Shabach in January 2018.  Despite his family submitting a petition to place a stay on the demolition, a military court ruled that the IDF may proceed with the demolition.

A Palestinian protesting the demolition was killed during the event while confronting IDF soldiers.