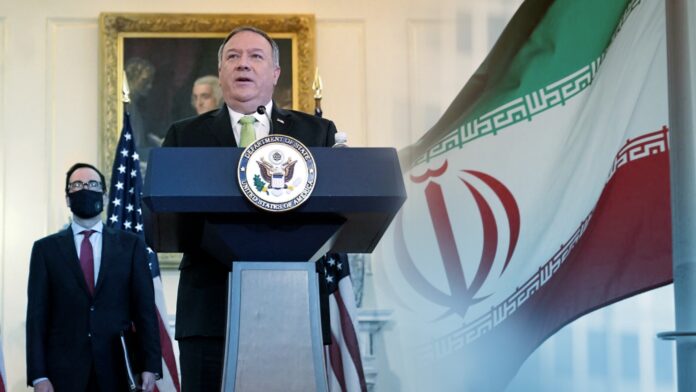 The Trump administration on Monday announced a series of new sanctions that target Iran’s arms industry as a part of the “maximum pressure” campaign against the Islamic Republic.

“Rather than waiting for Iran to threaten the world, the US is taking sweeping actions to prevent the world’s top state sponsor of terror from obtaining a nuclear weapon,” US Secretary of State Mike Pompeo tweeted. “This includes sanctions on 25 entities and individuals. We are keeping Americans and world citizens safe.”

The sanctions were unveiled both at a Pompeo press conference in Washington and through an executive order signed by US President Donald Trump. Pompeo was joined by UN Ambassador Kelly Craft, National Security Advisor Robert O’Brien, Treasury Secretary Steve Mnuchin and Defense Secretary Mark Esper.

“Today, I will take the first action under this new executive order by sanctioning the Iranian Ministry of Defense and armed forces logistics and Iran’s defense industries organization and its director,” Pompeo said.

“For nearly two years, the corrupt officials in Tehran have worked with the illegitimate regime in Venezuela to flout the UN arms embargo,” he said. “Our actions today are a warning that should be heard worldwide, no matter who you are. If you violate the UN arms embargo on Iran, you risk sanctions.”

Additionally, Pompeo said the US would sanction two individuals who are central to Iran’s uranium-enrichment operations.

The US actions come on the sidelines of the opening session of the UN General Assembly and in advance of Trump’s anticipated virtual address on Tuesday.

They also come as the US seeks support to snap back UN Security Council sanctions against Iran, which were lifted in 2015. This would include an arms embargo. The US is concerned by UNSC plans to lift its existing arms embargo against Iran on October 18.

Monday’s sanctions are part of an attempt to mitigate that damage and to pressure UNSC members to reimpose sanctions.

“Transfers to and from Iran of arms or related material or military equipment represent a continuing threat to regional and international security – as evidenced by Iran’s continued military support that fuels ongoing conflict in Syria, Lebanon, Iraq, and Yemen,” Trump wrote.

“Iran benefits from engaging in the conventional arms trade by strengthening its relationships with other outlier regimes, lessening its international isolation, and deriving revenue that it uses to support terror groups and fund malign activities,” he added.

Trump’s executive order seizes the property and assets connected either directly or indirectly to the Iranian arms industry.

“A number of our targets today are affiliated with the Atomic Energy Organization of Iran, which has operational and regulatory control over the nuclear program and bears responsibility for nuclear research and development,” he said.

“It is our expectation that all UN member states will fulfill their legal obligation and reimpose sanctions on Iran,” Craft said.

Asked about European countries’ objections to the US snapback, Pompeo said: “The country that’s isolated today is not the United States, but rather Iran.”

“The good news is the United States is going to make sure it happens,” Pompeo said. “We’re going to take the action that is necessary to actually deliver on what the E3 [UK, France and Germany] tells us they have as their objective. I wish that they would join us in this. We’ve had this dispute about the merits of the JCPOA that’s been going on since the Trump administration has come into place.

Over the weekend, UN Secretary-General Antonio Guterres wrote to the UN Security Council president to explain the situation by which the majority of the 15 UNSC member states did not recognize the US request to snap back sanctions against Iran. As a result, no action had been taken to reimpose those sanctions, he said.

“It is not for the secretary-general to proceed as if no such uncertainty exists,” he wrote, adding that he awaited instructions from the Security Council.