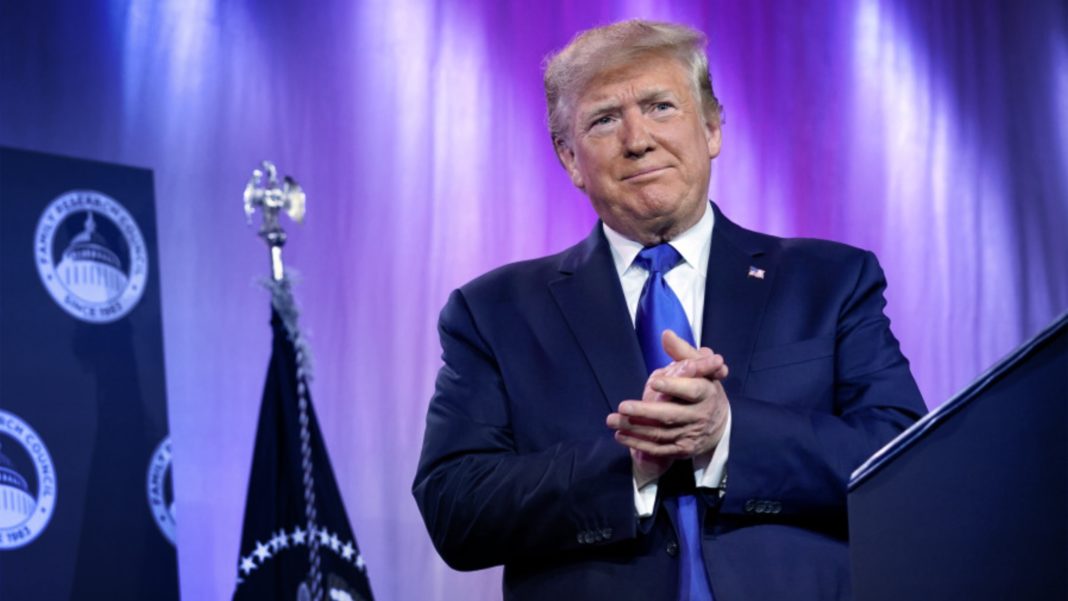 US President Donald Trump swore allegiance to Israel as he decried endless Middle East wars and defended his decision to withdraw US troops from the Kurdish area of northern Syria when he spoke Saturday night at the annual Values Voters Conference in Washington D.C.

“We are standing with our close friend and partner, the State of Israel,” Trump said, as he reviewed the steps he has taken on behalf of the Jewish state since taking office, such as relocating the US embassy to Jerusalem and recognizing Israeli sovereignty on the Golan Heights.

In the same speech Trump defended the recent decision to withdraw US troops from the Kurdish region of Syria along the Turkish border, a move which paved the way for Turkey to attack that area. In the five days since the assault began, more than 100,000 people have fled to escape the violence.

The decision has sent alarm waves across the Middle East, where it is widely considered that Trump abandoned the Kurds after they had staunchly allied themselves with the US in the battle against ISIS.

Trump told the conference that he planned to protect the Kurds with the threat of economic sanctions against Turkey.

“I have made clear to Turkey that if they do not meet their commitments, including the protection religious minorities and watching over the ISIS prisoners that we captured, we will impose very swift and severe economic sanctions,” Trump said.

He added that on Friday, he committed $50 million to support Christians and other religious minorities in Syria. “With one clear voice the US condemns the persecution of Christians.”

Then he proceeded to speak about the problem of US military involvement in the Middle East, specifically Syria.

Any “military engagement where we send young men and women to fight and die must have clear objectives, vital national interests and a realistic plan for how the conflict will end. We don’t want to be in 19-year wars where we serve as a policing agent for the whole country,” Trump said.

“In Syria, we were supposed to be there for 30 days and we have been there for 10 years. These wars, they never end. We have to bring our great soldiers back from the never-ending wars,” Trump said.

“We have spent 8 trillion dollars in the Middle East, thousands of American soldiers have lost their lives and tens of thousands more have been wounded,” he said. Four trillion of that sum was on the War in Iraq, Trump said, adding that the Middle East is less safe and less secure now.

“Iraq was the single worst mistake this country has ever made, going into the Middle East,” Trump said.

He spoke at length about the pain caused to US families who have lost soldiers in the Middle East, describing the scene at Dover Air Force Base when the bodies are returned home.

“The hardest thing I have to do as president is sending letters to the families of our fallen heroes,” Trump said. “We have to bring our heroes, our great soldiers home,” he added.

Trump said that he knows that, with regard to the Turkish-Syrian border, he is “an island of one” with many opposed to his decision.

“That 30 kilometers – 22 miles – a strip along Turkey. And the Kurds are tending to leave and that’s good. Let them have their borders. But I don’t think our soldiers should be there for the next 50 years guarding a border between Turkey and Syria when we can’t guard our own borders at home. I don’t think so,” Trump said.

The US has paid a lot of money to the Kurds over the years, the US president said. “Don’t forget they are fighting for their land, they haven’t helped us fight for our land,” Trump said.

After the speech he tweeted, “The same people that got us into the Middle East Quicksand, 8 Trillion Dollars and many thousands of lives (and millions of lives when you count the other side), are now fighting to keep us there. Don’t listen to people that haven’t got a clue. They have proven to be inept!”