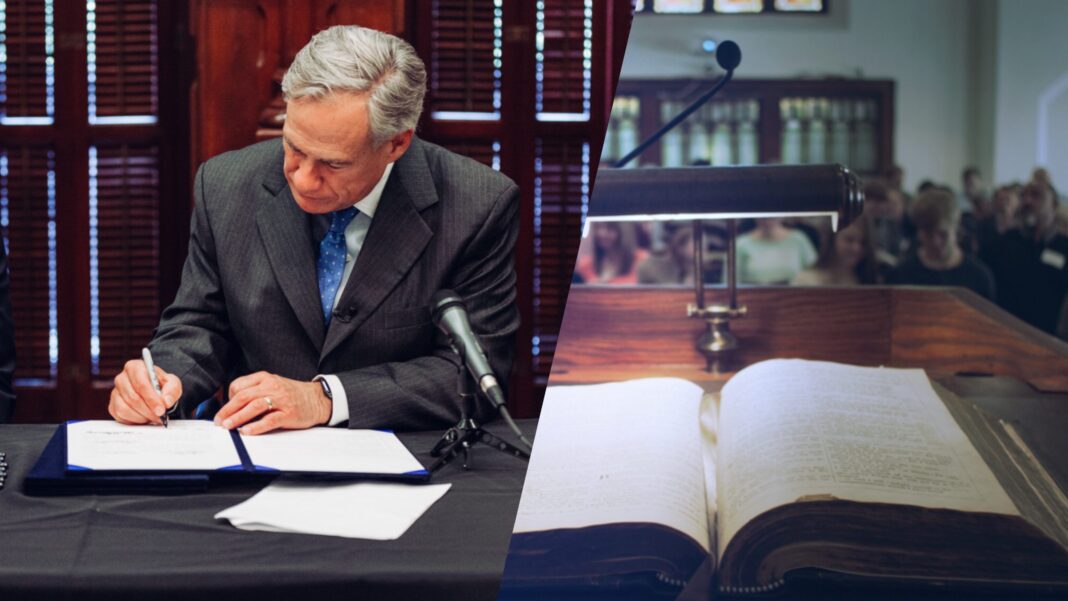 Texas Gov. Greg Abbott signed a bill on June 15 that prohibits government agencies from ordering churches and houses of worship to close, following health-related orders that were handed down during the COVID-19 pandemic that mandated the closure of churches and other religious houses.

Stating that the bill is designed to protect Texans’ First Amendment right to religious freedom, Abbott said the Republican-backed bill, HB 1239, prohibits any public official or government agency in Texas “from issuing an order that closes places of worship.”

“The First Amendment right to freedom of religion shall never be infringed,” he wrote on June 15.

This past year, the governor signed an executive order to shut down many businesses and institutions in Texas, including churches, as they were deemed “nonessential” during the pandemic. Abbott was later sued by faith leaders to reopen churches across the state and deem them “essential” before he reversed the order.

State Rep. Scott Sanford, a Republican who sponsored the measure, said this week that houses of worship “provide essential spiritual, mental, and physical support in a time of crisis.”

“Closing churches not only eliminated these critical ministries and services,” he argued, “but it violated their religious freedom, guaranteed by our laws and Constitution.”

State Rep. John Turner, a Democrat, told the Texas Tribune in April that he tried to add in amendments to the bill that would specify certain definitions and terms, although they failed. Turner noted that during natural disasters, including hurricanes, churches were shut down.

Critics of the measure, including Turner, criticized it as being too sweeping and too broad.

“I just thought it was a broadly written bill that could be problematic if it’s applied as written,” the lawmaker told the paper.

In response to Turner’s arguments, Republican lawmakers who supported the law noted that in Texas, “strip clubs and liquor stores” remained open while houses of worship were forced to close last year.

And on Monday, meanwhile, Florida Gov. Ron DeSantis signed a measure that would require K-12 public schools to mandate a minute of silence at the start of each school day.

“You [can’t] just push God out of every institution and be successful,” he said during a signing event. “I’m sorry, our Founding Fathers did not believe that,” DeSantis added.

Over the past year, we have seen the many governments give orders to a place outside of their jurisdiction and both their Biblical and Constitutional authority… the Church.

Grace Community Church and MacArthur were relentlessly persecuted by LA County in California for preaching the Gospel in person and refusing to close the doors of their Church to people in need of Biblical Truth.

The Bible urges Christians to not forsake “the assembling of ourselves together…and so much the more, as ye see the Day approaching” (Hebrews 10:25)