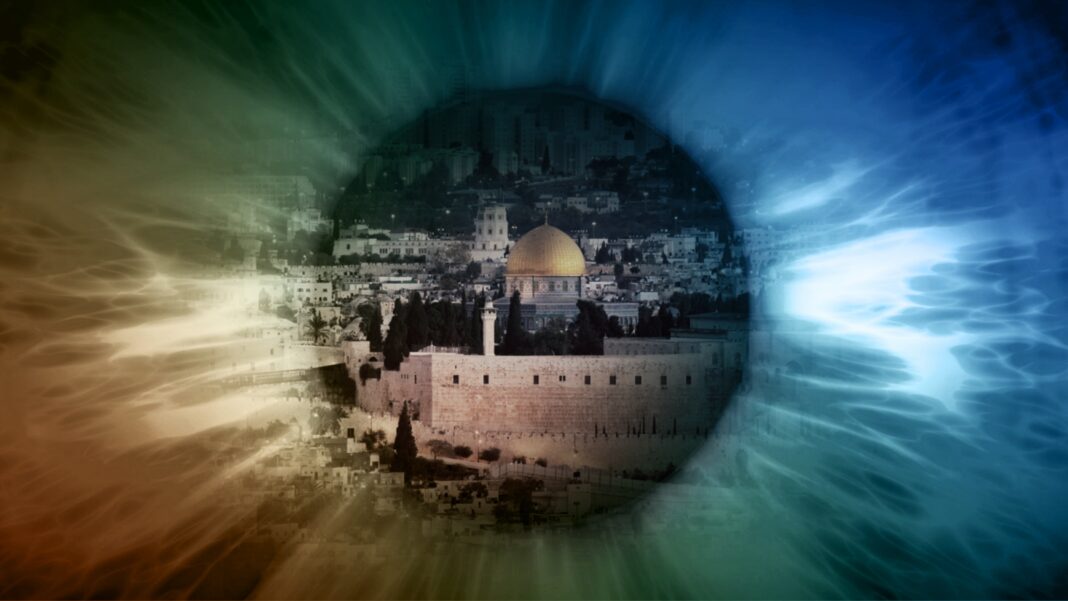 As some know, I’ve been totally blind for about twenty-seven years due to retinitis pigmentosa (RP), a hereditary disease in which the rods and cones of the retina degenerate. There is no replacement for them at this point—the retina is brain tissue that doesn’t regenerate. (Some who disagree with my view of Bible prophecy might conclude that brain-tissue degeneration is why I can’t see things their way.) But, as I understand it, degeneration of the tissue that comprises the retina has nothing to do with cognitive dysfunction. So maybe what I’m saying here will make some sense.

When I started experiencing night-vision problems when I was in my thirties, I went to an ophthalmologist, who said he thought I might have this disease. He sent me to a retinal specialist, who indeed, after a quite painful exam that lasted more than forty-five minutes, said I had RP. At the time, it was a malady they knew relatively little about. There was no cure, and he said the prognosis was almost certain blindness.

The Lord was good, and the disease progressed very slowly–compared to many who have RP. It wasn’t until I was around fifty-two that I lost the ability to see well enough to operate fairly normally. My central vision became affected and it was lights-out from then on, so to speak.

The time leading up to that point, however, was the most frustrating time. When I was in my late forties, I could see partially well—and partly terribly. It grew progressively worse, of course.

It was a constant struggle to determine if what I was seeing was reality or imagination. That’s the only way I can explain it. Most movement, whether I was moving about physically or looking at text in books or on a computer monitor, was terribly taxing.

It was only after I completely lost the ability to make out any text on the screen that I had to push back and say to the Lord: “If you want me to continue to write, you will have to intervene.”

Thankfully, He did so, and thirty-something books and hundreds of articles have been the ongoing result of His blessings on my life.

But that period leading up to just giving it all over to Him was the toughest time and the most exasperating. I could see just clearly enough to get into trouble with trying to figure it all out.

Now to the point, I hope.

Here is what the apostle Paul writes.

Romans 11:25-27 KJV – “For I would not, brethren, that ye should be ignorant of this mystery, lest ye should be wise in your own conceits; that blindness in part is happened to Israel, until the fulness of the Gentiles be come in. And so all Israel shall be saved: as it is written, There shall come out of Sion the Deliverer, and shall turn away ungodliness from Jacob: For this is my covenant unto them, when I shall take away their sins.”

In the eleventh chapter of Romans, Paul deals with the nation Israel—with the individual disposition of the Jew with regard to their blindness, spiritually speaking.

Lest anyone believes the Jews are condemned forever because the father of lies—Satan—has convinced people that the Jews are responsible for killing Jesus Christ, read the book of Romans. Paul destroys that absolute lie from the pit of hell. He tells that they are blind partially for now. But their future is glorious beyond all imagination, according to the promise of God.

In my own small experience with the physical blindness, the most painful part was trying to do everything myself as I struggled to see through the progression of the disease. To make perhaps not the best analogy, but the one in mind at present, the nation of Israel—the Jews, as nonbelievers in Christ as Messiah—are partially blinded. Religious Jews believe in Jehovah, the Person they see as the One and Only God. They reject that Jesus was and is their Messiah and the Savior of the world from the collective and individual sins of mankind.

This spiritual blindness has caused them great stress throughout history. They haven’t turned this spiritual disease over to the God who can heal them.

This remains their state at present. They can’t understand the world’s hatred or the persecution they are even today enduring. They can’t grasp the division within their own ranks as a people, the sons and daughters of Abraham, Isaac, and Jacob.

That painful progression of Israel’s spiritual blindness—that partial blindness—I think, is made manifest in the news excerpt below.

When asked about American Jews, [Mark] Zell [chairman of Republican Overseas] stated: “75-80 percent of Jews in the United States vote for Democrats. It goes beyond logic. It’s irrational. They vote that way in any election campaign and cannot renounce the Democratic Party. It is against their interests as Jews. I do not spend our time explaining to Jews in the United States who to vote for.”

On the other hand, Zell noted, “there are pro-Israel evangelicals and Christians who look to us to see if we vote for Trump and the Republicans to make sure we are with them.”

Zell firmly believes that a Biden victory would be disastrous for Israel and the Jewish people.

“He [Biden] announced that as soon as he takes office in January he will renew the nuclear deal with Iran. He also said that immediately after entering the White House he will renew funding for the PA and the UN regarding the Palestinians, but beyond that, we see within the Democratic party congressional delegates who are really anti-Semitic. Jews see it, they understand it and just don’t care. They also donate hundreds of millions of dollars to the Democratic Party. I have no words,” Zell said, adding that “in New York there was a Democratic delegate, Eliot Engel, who was a friend of Israel, and they threw him in the trash in the primaries and replaced him with an anti-Semite.” (Mark Zel: If Biden is elected, Jews in Israel will be harmed, Arutz Sheva, U.S. and Canada—Israel National News, October 9, 2020)

The whole House of Israel—it is obvious by considering that the Jews in New York go for politicians and policies that are against Israel for the most part, while Jews in Israel see things exactly opposite—has a blindness that seems inexplicable. They can see only partially and, like my own case of progressive physical blindness, it is exasperating, and gets them into situations in which they can do nothing themselves to bring them into a clear vision of things before them.

Thankfully, as Paul foretells, this blindness is only temporary. They will one day be healed, and will see their Messiah as He comes to rescue them.

Hey! I’m looking for the same Divine Healer, myself! I hope you are, too. His name is Jesus Christ!