The FBI and the Spanish police arrested a “lone wolf” radical Islamist suspect on Friday who was believed to be planning to carry out terrorist attacks in Barcelona.

The Moroccan man, who was not named, was detained in the Mediterranean city in a dawn raid by armed police after a surveillance operation.

The Spanish Civil Guard, who also worked on the operation with Moroccan intelligence officers, said the man had become a “profoundly radicalized” Islamic State follower who was looking for targets during Spain’s strict coronavirus lockdown.

by armed police after a surveillance operation. (Guardia Civil)

The suspect could have carried out strikes this weekend, according to Spanish television channel Antena 3.

Police said the man had been radicalized and linked to ISIS for at least four years but had kept a low profile online and offline until recently.

Investigators noted a “striking and worrying” change in the man’s behavior after the state of emergency was declared by the Spanish government on 14 March in response to the coronavirus epidemic.

Officers became concerned he was preparing to carry out an attack in Barcelona in response to ISIS calls to strike in western Europe.

The man had become “totally influenced by Isis propaganda” and had sworn loyalty to the terrorist group which raised security concerns. (Guardia Civil)

“Since the coronavirus began spreading across Europe, there have been a number of single-person terrorist attacks involving knives or vehicles,” the Civil Guard said in a statement.

“The arrested man had used social media to proclaim his loyalty to ISIS and his hatred for the west. Surveillance officers noticed that he had begun to disregard the lockdown rules set out in the state of emergency on a regular basis, that he was taking important security measures as he ventured around Barcelona, suggesting he was carrying out a possible search for targets.”

The man had become “totally influenced by Isis propaganda” and had sworn loyalty to the terrorist group, which raised security concerns.

During the investigation, the FBI and the Moroccan General Directorate of Homeland Security, provided important help to their Spanish counterparts.

The arrest was carried out at an apartment in the Barrio Gotico, an area in central Barcelona normally popular with tourists.

The suspect will appear before the National Crime Court in Madrid, which handles terrorism cases, in the coming days.

British police, who were also involved in the operation, confirmed his identity a few hours after the national police in Madrid said they detained Bary, an Egyptian national, and two other men in a flat in the southern city of Almeria. 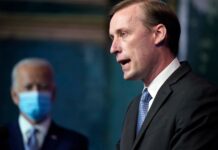