Protesters in central Beirut tried to stop a confidence vote in parliament Tuesday on the new government they say fails to address their demands and cannot rescue the ailing country.

Security forces used tear gas and water cannon to break up groups of demonstrators who hurled rocks over the blast walls erected around parliament.

Protesters draped in Lebanese flags and chanting “no confidence” had started gathering before dawn at various points around the capital in a bid to dodge police checkpoints.

Some lawmakers spent the night in parliament to thwart protesters who have successfully prevented several sessions since they launched their campaign in October last year.

“I’m here to say ‘no confidence’ in the government because the way it was formed shows that it cannot be trusted,” said one protester who gave her name as Carole.

Hassan Diab, a little-known academic and former education minister, was tasked with forming a government in December after Saad Hariri was forced to resign from his post as prime minister by pressure from the street.

The unprecedented wave of cross-sectarian demonstrations has pushed for the wholesale removal of a hereditary political elite seen as corrupt and incompetent.

While Diab vowed to carry the hopes of the protesters, portfolios in his government were shared out through the same partisan and sectarian gamesmanship that has been the trademark of Lebanon’s political class for decades.

If approved by parliament, the new government will face one of the worst crises in the county’s recent history.

Besides the biggest popular challenge to the power-sharing system that emerged from the 1975-1990 civil war, the country faces its worst economic crisis in decades.

Lebanon is on the brink of defaulting on its debt and the impact is being felt by all social classes, with tough restrictions on cash withdrawals and a devaluation of the national currency. 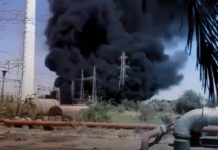 Explosion Reportedly Damages Power Plant in Iran, the Latest in Series of Blasts

Mike Huckabee: Racism a ‘Spiritual’ Problem for US — & Elections...

Source - July 5, 2020
America's racism problem is more "spiritual" than political, Mike Huckabee said Saturday night; "The only way to get rid of racism is with God."

Donald Trump: ‘We Only Kneel to Almighty God’