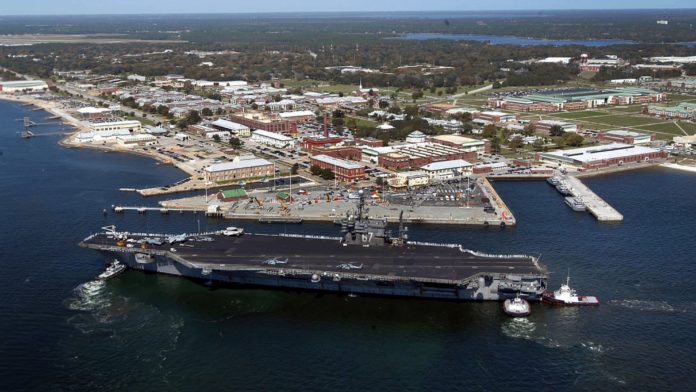 The gunman who opened fire Friday morning at Naval Air Station Pensacola in Florida, fatally shooting three people, has been identified as an aviation student from Saudi Arabia as investigators are looking into whether the attack is terrorism-related.

The shooter — who was wielding a handgun, despite firearms not being allowed on base — was confronted and taken out by a pair of responding officers, officials say. Two people were killed at the scene while a third victim died after being rushed to a local hospital. Seven others suffered injuries and are undergoing treatment, including the two officers, one of whom was shot in the arm and the other in the knee. Both are expected to survive.

“The government of Saudi Arabia needs to make things better for these victims,” Gov. Ron DeSantis, R-Fla., who says he has spoken to President Trump about the shooting, told reporters during a press conference Friday afternoon. “They are going to owe a debt here given that this is one of their individuals.”

“Anyone who serves in the Navy knows that this is a special place, Naval Air Station Pensacola,” DeSantis added. “All these brave warriors who wear the wings, they come through here for flight training. And so this is a dark day for a very great place.”

NAS Pensacola is home to the Naval Education and Training Security Assistance Field Activity’s International Training Center, which the Navy says was “established in 1988 to meet the aviation-specific training needs of international officers and enlisted students from allied nations.”

“Immersing international students in our U.S. Navy training and culture helps build partnership capacity for both the present and for the years ahead,” Cmdr. Bill Gibson, the center’s officer-in-charge, said in 2017. “These relationships are truly a win-win for everyone involved.”

The majority of the hundreds of students that have participated in the program, the Navy says, are from Saudi Arabia.

Further details about the shooting incident Friday were not immediately available.

Police say they first received a call about the shooting at 6:51 a.m. At 7:48 a.m., police confirmed that the shooter was dead.

The base will remain closed until further notice and the FBI, ATF and the U.S. Attorney General’s Office are said to be assisting in the investigation.

Escambia County Sheriff David Morgan praised the responding officers during a press conference Friday, saying that “they ran to the fight, not from the fight.”

“The best of our community was on-scene today,” Morgan said. “And that’s why it turned out the way it did.”

Jeff Bergosh, an Escambia County commissioner who works at NAS Pensacola as a civilian contractor, told the Pensacola News Journal that he saw ambulances and fire trucks racing toward the base while he waiting in line to enter at one of its gates.

“There’s probably been 100 or so various law enforcement vehicles zooming down the wrong side on Navy Boulevard,” he said, adding that he received a call from co-workers on base who reported being on lockdown.

Lucy Samford, 31, said her husband, a Navy reservist and civilian worker on the base, was about 500 yards from where the shooting happened. She said she got a call from him a little after 7 a.m. and “one of the first things out of his mouth was, ‘I love you. Tell the kids I love them. I just want you to know there’s an active shooter on base.'”

Her husband, whom she declined to identify, later told her he was OK.

The incident comes days after a sailor fatally shot two people and injured a third before turning a pistol on himself at Pearl Harbor Naval Shipyard.

NAS Pensacola employs more than 16,000 military and 7,400 civilian personnel, according to its website. One of the Navy’s most historic and storied bases, it sprawls along the waterfront southwest of downtown Pensacola and dominates the economy of the surrounding area.