Report: Taliban Killing People Found with Bibles on Their Phones 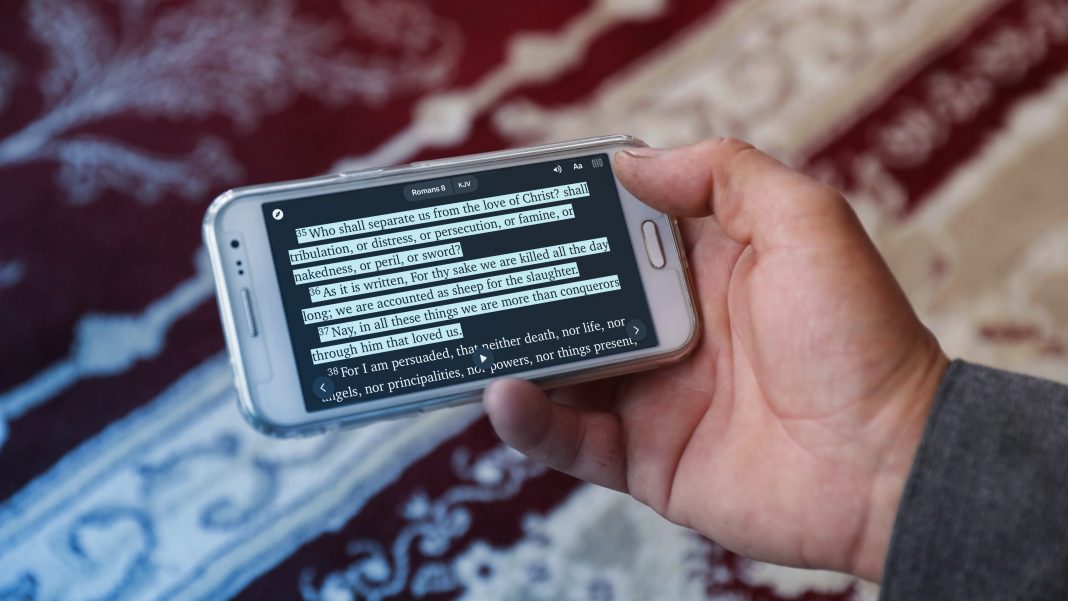 The Taliban is killing people in Afghanistan they find with copies of the Bible on their mobile phones, a Christian non-profit announced on Tuesday.

The Taliban, a radical Islamist terrorist organization, seized leadership of the country on Sunday after surrounding the nation’s capital, Kabul, prompting former President Ashraf Ghani to flee. The Taliban ruled Afghanistan until 2001, when the United States invaded the country, and established a brutal regime that regularly persecuted political dissidents, religious minorities, women, and anyone considered to be violating Islamic law, or sharia.

According to SAT-7, an organization that broadcasts Christian programs to churches and Christians in the Middle East and North Africa, the Taliban is using “spies and informants” to persecute the Christian minority in the country.

“We’re hearing from reliable sources that the Taliban demand people’s phones, and if they find a downloaded Bible on your device, they will kill you immediately,” said SAT-7 North America President Dr. Rex Rogers told Religion News Service. “It’s incredibly dangerous right now for Afghans to have anything Christian on their phones. The Taliban have spies and informants everywhere.”

“Our brothers and sisters in Christ are telling us how afraid they are. In the areas that the Taliban now control girls are not allowed to go to school and women are not allowed to leave their homes without a male companion,” said Micah, a name assigned to him to protect his identity.

Even without the Taliban in power, Afghanistan was the second most dangerous place for Christians to practice their faith, behind North Korea, according to the 2021 version of Open Doors’ World Watch List. Open Doors is a non-profit that monitors Christian persecution and aids its victims. The U.S. State Department similarly described the now-former Afghan government as extremely hostile to Christians.

In its 2020 Report on International Religious Freedom, the State Department documented widespread death threats against Christians — most commonly from family members — and from officials. Christians in Afghanistan were forced to practice their faith underground and meet with small groups to worship.

Christians also faced significant legal persecution under the U.S.-backed government. Apostacy, the “crime” of renouncing Islam for a different faith, was punishable by death, imprisonment, or confiscation of property. Anyone who preaches another religion is subject to the same punishment. After conversion to a different religion, an individual was given three days to recant before they face punishment for apostasy.

The State Department estimated Christians and other minority religious groups made up 0.3 percent of the population, adding that no reliable estimates of the Christian community exist.

Now that the Taliban has seized power again after a 20-year war, Christians who were already being forced to conceal their beliefs for fear of retribution are reportedly being targeted and murdered for their faith.

“Secret believers in Afghanistan are especially vulnerable. Prior to Taliban rule, they already had a very difficult time living out their faith, as they had to keep it secret from their families for fear of being shunned, or worse, killed,” said Brother Samuel, Open Doors Field Director for Asia.

“Now that the Taliban is in power, their vulnerability increases tenfold. It would be almost impossible to be a follower of Jesus in this country,” Brother Samuel continued. “We are monitoring the situation, but this is the time for us to ask God to have mercy not only on His people but on this country as a whole.”

The Taliban is infamous for monitoring the social practices of local populations and imposing ruthless punishments based on their interpretation of Islamic Law, or what observers call a “parallel system of justice,” according to the U.S. Department of State’s 2020 Report on International Religious Freedom.

Open Doors noted that though the Taliban has promised a “more modern and reformed approach to government,” fear remains as to how it will impose sharia in the coming days and weeks.

“With the collapse of the government, the expansion of extremism, food shortages and the raging pandemic, Afghanistan needs urgent prayer from the global Church right now, more than ever,” the organization said.

Christian Ministries around the world have come out imploring the Body of Christ to pray for Believers in Jesus in Afghanistan now facing the take-over of the Taliban.

Amir Tsarfati of Behold Israel, via Telegram, urged, “Prayers are needed for the local Afghan believers that request to be flown out of the country as they run for their lives!”

Pastor Jack Hibbs, of Calvary Chapel Chino Hills, shared via Facebook: “Pray for the small group of believers in the country. Pray that they find strength, wisdom, and supernatural peace in God’s promises.” Hibbs also provided a full list, by OpenDoorsUSA on how you can pray for this country in its state of incredible crisis.

Ken Ham, of Answers In Genesis, reminded the Church of two things: “1. Pray for Christians/Christian leaders in Afghanistan as they will face intense persecution. 2. While we still have liberty as Christians in the USA (eroding daily as it is), use the time to stand boldly and proclaim unashamedly the truth of God’s Word & the gospel. There could come a time where we won’t have that liberty anymore. “making the best use of [redeeming] the time, because the days are evil.” (Ephesians 5:16).”

Anne Graham Lotz via her Social Media expressed the “very heavy burden” she feels, like many others, “to pray for Afghanistan,” specifically the Believers in Jesus Christ that are trapped and threatened in the country.

Creator of the Universe. Ruler of All. Lord of the Nations.
Are You not the Judge of all the earth? If my heart is broken…shattered…over what’s taking place in Afghanistan, what must Your great heart feel? So I come to You and plead Your mercy for Your people who are now hiding in basements, caves, any hole they can find, knowing that demonic forces will not stop until Your people are found and slaughtered. So I pray for Your people…followers of Jesus…to be supernaturally protected and delivered. Send Your angel armies to surround Your people, as You did for Elisha (2 Kings 6). Blind the enemy so they cannot locate Your people in hiding. Didn’t You teach us Yourself that when we pray, we are to pray that we would be delivered from evil? (Matthew 6) So. Deliver Your people. By any means. Please.
But if You do not, and if You allow Your people to be slaughtered, then I pray that You would give dying grace to each and every one of them. Men. Women. Children. Fill them with Your supernatural peace. Give them a vision of Heaven opened for them, as You did for Stephen in Acts 7. Open their eyes to see You, Lord Jesus, standing at the right hand of the Father, waiting to welcome them Home and give them a martyr’s crown.
And then I pray…yes I do… for the fullness of Your wrath to fall on the evil perpetrators, whether they are in Kabul or Tehran or Washington, DC. Holy God. Avenge Your people.
I know You hear this prayer. Now I wait to see how You will answer.
Even so, come Lord Jesus. Surely it’s time for You to be glorified in all the earth.
For the sake of Your great name,
Amen
Facebook
Twitter
Telegram
Pinterest
Email
Print