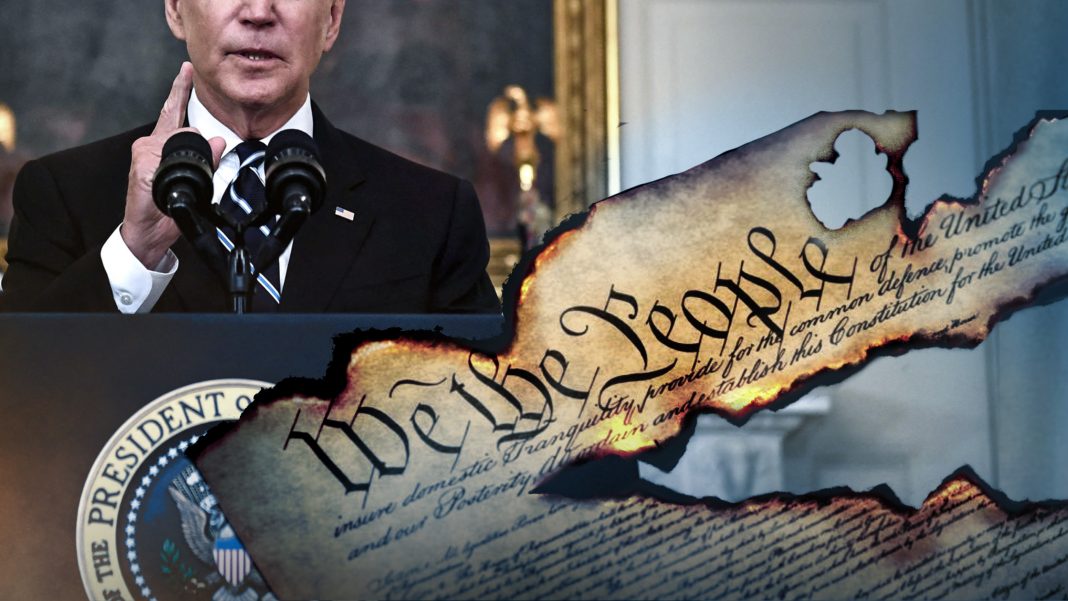 What’s the next mandate or power grab? When leftist authoritarians force their agenda on the rest of us, hold the line! Washington Time’s Robert Knight says “it’s considered good, science-directed government – except when they ignore science.”

A few weeks back, I reported on how the godless Left gleefully use any crisis to get what they want, even when it causes cultural chaos, suffering, and death. You likely know by now that sadly, this is not an exaggeration. Remember, to them, the issue is never the issue; the issue is the revolution which includes rebellion against God as well as rejection of His truth and fixed moral absolutes.

So how do we respond when, apparently, not enough American citizens are pushing back against a tyrannical government and its policies?

Make no mistake, Joe Biden is not incompetent, ignorant, or innocent of the chaos and division he is causing. He’s following marching orders. Journalist, Leo Hohmann says Biden’s job is to precipitate the following:

The O’Biden administration is on its way to achieving these and other godless goals prepared by global elites and Democrat socialists before old Joe even took office. Did you ever imagine the level of power and control over our formerly free republic that globalists at the World Economic Forum, corporations, the United Nations, and countless rich, power elites would have over Americans?

You’re probably tired of the vax mandate debate. And yet, it is necessary. You also likely agree it is unconstitutional, and the executive branch was never intended to have this much authority over states and citizens. But Biden’s words in recent speeches have not only been alarming and divisive, but dangerous and tyrannical.

Blue state governors are going along with the Biden power plan while many red-state governors have vowed to fight back in the face of bullying and threats.

Others, including Republican governor of Mississippi, Tate Reeves, have urged citizens to take the jab. Though he supports the vaccines, he is against mandates.

“The vaccine itself is life-saving but this unconstitutional move is terrifying; This is still America, and we still believe in freedom from tyrants.”

Marxists do not appreciate resistance, of course. For example, on the left coast in Portland, Oregon, the riot capital of the USA, Democrat Mayor Ted Wheeler wants to forbid any city purchases from the state of Texas because of its new law protecting babies with a heartbeat in the womb.

As an interesting side note for practicing Christians, the Bible warns against partnering with blatant evildoers and unbelievers and says to get away from them and “be separate.” The Apostle Paul states:

Biblical values such as God, Truth, natural marriage, and valuing every human life do not affect people on the West coast, but they want to force the rest of the country to conform to their ungodly, immoral values.

In an article at American Family News, Robert Knight writes:

“Fellow Left Coast state California bans travel by state employees to Texas over the Lone Star State’s policy of allowing faith-based adoption agencies to decline to place children in same-sex households. The people who run these adoption agencies actually believe that God created men and women as different and complementary, and that children benefit most when they have a married mother and a father in the home.

Recently, California extended its travel ban to five more states because those states are considering barring men who identify as women from competing in women’s sports.”

It’s bewildering the antichrist spirit of the age has permeated every major institution in the nation as they are willing to silence anyone who doesn’t comply with humanist, secularist, progressive narratives.

We’ve seen this with the health establishment, the Democrat media and Big Tech who have teamed up with the White House to suppress increasing documented evidence of vaccine deaths and other serious shot reactions as they have from the beginning demonized alternative treatments.

This brings us to the concern about religious freedom and the ability to preach the gospel of Jesus Christ unhindered, a door which seems to be closing little by little. Discrimination, deception, and double-standards are off the charts, but only one side is consistently accused of imposing its values on others.

Like many of you, I can’t imagine Americans going along with the propaganda and tyranny much longer, but then again, I thought more of us would have resisted the left’s agenda of deconstruction and its anti-American philosophy long ago.

“I think the gap between the people pushing socialism on America and the rest of America is widening rapidly [and] becoming more evident. The only question is, will we still have a country left by the time we can use the election system to throw out the people who are abusing power.”

I’m hoping we can have a fair election next time, but that ship may have sailed. Plus, one election will barely make a dent in all the damage the left has unleashed in recent decades. Unfortunately, we need to prepare for more of what we’ve been seeing while we keep on trusting the Lord regardless of the circumstances.

Now is not the time to be silent, to back down or retreat. Stay strong, friends!