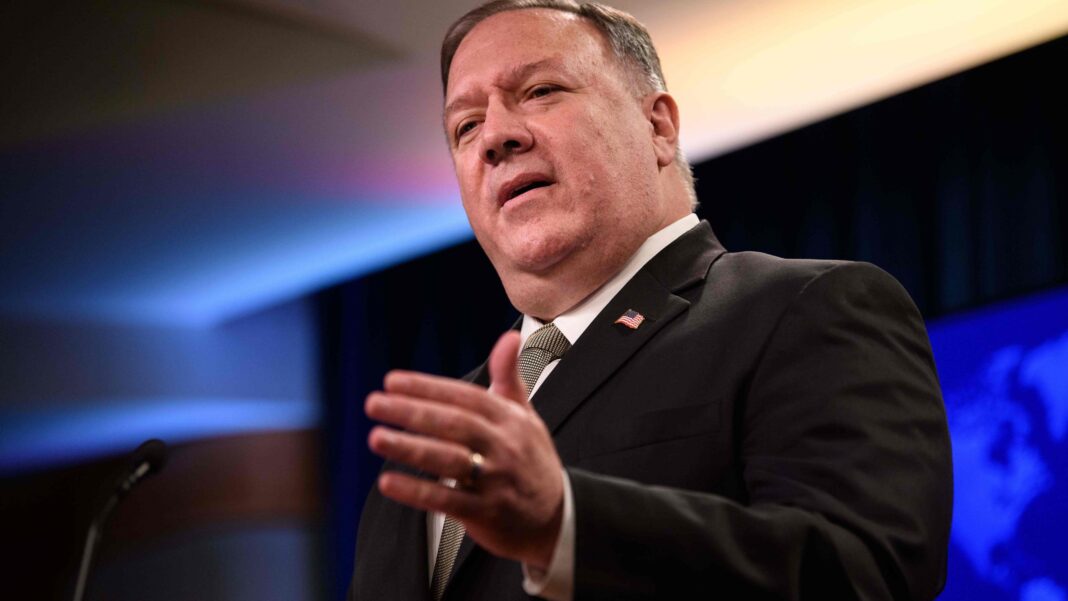 Secretary of State Mike Pompeo on Monday criticized “wokeness” and political correctness within the official government Voice of America broadcaster after some employees protested his plan to speak to official U.S. broadcasters at VOA headquarters.

Mr. Pompeo said Voice of America, which broadcasts to a global audience beyond U.S. shores, had “lost its voice” and needs to step up efforts to promote democracy, freedom and American values,  instead of criticizing the United States.

Mr. Pompeo said that, as with other government agencies, the international broadcast outlets had lost their way after the end of the Cold War in the early 1990s.

“Many wrote that history was over. We allowed security protocols to lapse, and VOA lost its commitment to its founding mission,” Mr. Pompeo said, according to his prepared remarks. “Its broadcasts had become less about telling the truth about America, and too often about demeaning America.”

VOA’s parent, the U.S. Agency for Global Media, also lost its ability to grant security clearances after foreign nationals were given access to secrets without proper vetting of employees at VOA, RFE/RL, Radio Free Asia and other broadcasters.

Congress sought to strengthen broadcasting by creating a new chief executive officer position for the USAGM, which oversees the networks that receive more than $700 million annually in taxpayer funding.

Mr. Pompeo noted that some VOA employees had protested his appearance and did not want his remarks broadcast over VOA’s networks.

“Think about that,” he said. “We are all parts of institutions with duties and responsibilities higher than any of us. And this kind of censorial instinct is dangerous. It’s morally wrong. And it’s against your mandate.”

“Censorship, wokeness, political correctness, it all points in one direction — authoritarianism cloaked as moral righteousness,” Mr. Pompeo added, noting the recent purge of voices on social media platforms Twitter and Facebook and restrictions on social media apps by Apple.

“This is not who we are, as Americans. It’s not what Voice of America should be,” he said. “It’s time to put ‘woke-ism’ to sleep.”

Mr. Pompeo said in a speech broadcast around the world in more than 40 languages that official and semi-official broadcasters should acknowledge America’s faults and shortcomings, but provide better balance.

“But this isn’t the Vice of America, focusing on everything that’s wrong with our great nation,” he said. “It certainly isn’t the place to give authoritarian regimes in Beijing or Tehran a platform.”

Mr. Pompeo said the VOA’s mission is to promote democracy, freedom and American values, a mission that sets them apart from private news outlets like MSNBC and Fox News.

Official broadcasters are tasked with giving voice to populations struggling under totalitarian and authoritarian rule in places like China and Iran.

“You’re the voice of American exceptionalism. You’re the tip of freedom’s spear,” he said.

Mr. Pompeo said the administration has been working to fix problems at the broadcasters, through better vetting of employees and reorienting VOA back to its mission of “truth and unbiased reporting.”

Mr. Pompeo also contended VOA had been “rubber-stamping” visas for foreign national employees, including from China. “We shouldn’t be doing that, he said.

“During the best of times, the PRC ruthlessly imposes communism. Amid the most difficult challenges, the United States secures freedom,” Mr. Pompeo said, repeating a comment made last year. “There’s no moral equivalence. This is a self-evident truth. It’s not fake news for you to broadcast that this is the greatest nation the world has ever known.”