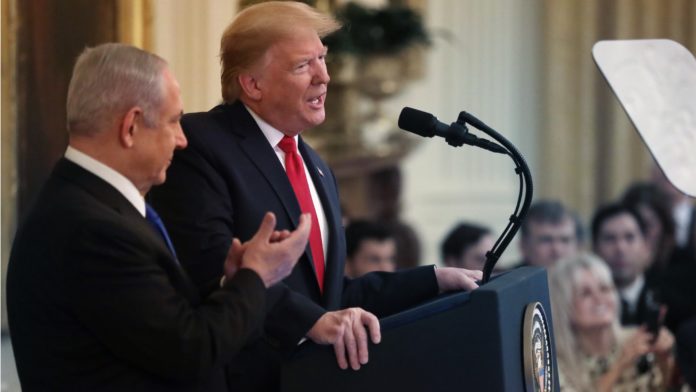 Prime Minister Benjamin Netanyahu praised US President Donald Trump on Sunday in a video message marking the 100th anniversary of the San Remo Resolution in which the world powers recognized the national rights of the Jewish people on the Land of Israel.

Netanyahu said that the US President should be praised for his willingness to recognize Israel’s presence in Judea and Samaria. The prime minister hinted that he would move forward with his plan to extend Israel’s sovereignty to areas of Judea and Samaria under the auspices of the newly revealed US peace plan.

“President Trump pledged to recognize Israeli sovereignty over the Jewish communities there and in the Jordan Valley. A couple of months from now, I am confident that that pledge will be honored, that we will be able to celebrate another historic moment in the history of Zionism. A century after [the] San Remo [Resolution], the promise of Zionism is being realized, because we never stop fighting for our rights,” Netanyahu told evangelical Christians in a video message. He concluded by saying: “Your efforts are part of that fight. Thank you for celebrating this historic occasion and securing the Jewish future.”

In January 2020, President Trump put forth the political component of his proposed peace plan. The plan emphasizes that “withdrawing from territory captured in a defensive war is a historical rarity. It must be recognized that the State of Israel has already withdrawn from at least 88% of the territory it captured in 1967.”

The plan goes on to explain that a  “transfer of sizeable territory by the State of Israel – territory to which Israel has asserted valid legal and historical claims, and which are part of the ancestral homeland of the Jewish people… must be considered a significant concession. Peace should not demand the uprooting of people – Arab or Jew – from their homes. Such a construct, which is more likely to lead to civil unrest, runs counter to the idea of co-existence.”

The first steps of the initiative allow Israel to extend sovereignty over 30% of Judea and Samaria, which means almost all Jewish settlements and the Jordan Valley.

After four years, a Palestinian state would be established if the Palestinian leadership meets a set of benchmarks, chiefly among them – renounce terrorism and ensure the rule of law.