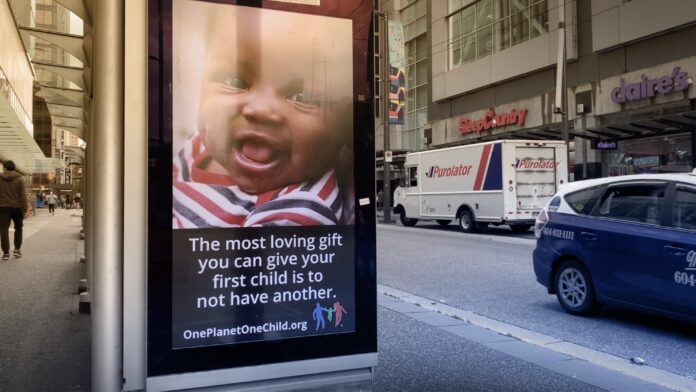 Just The News – An environmental ad campaign across parts of Canada and the U.S. is encouraging families to limit their size to just one child in order to save the environment.

The One Planet, One Child campaign, with eye-catching billboards in Vancouver, Colorado and Minnesota, uses images such as traffic jams, wildfires, calving icebergs and suburban sprawl to drive home its message of overpopulation.

“The most loving gift you can give your first child is to not have another,” one transit advertisement in Vancouver declares; another shows an image of a rock-climbing couple with the caption: “We Chose Childfree!”

The project states as its desired goal “a world where no one suffers in dire poverty and misery for lack of enough food, water, and other basic needs.”

“We see a world where all species thrive and where lower consumption and population are in balance with Earth’s finite resources,” they continue.

The campaign claims it is “raising public awareness of overpopulation, improving everyone’s knowledge on the subject, and serving as a demonstration model that may jump-start a global campaign to speed progress toward a ‘small family norm’.”

Live Action – The group’s goal is to drop the world population from today’s 7.8 billion to below 3 billion 100 years from now.

A healthy replacement fertility rate is 2.1, and the global fertility rate currently sits at 2.4. However, researchers have found that the world fertility rate is falling, and will drop below 1.7 by the year 2100. Twenty-three countries are predicted to see more than a 50% decline in their populations. This drastic decline in the population will lead to an economic crisis, with countries unable to support health care programs or welfare systems. With not enough people in the workforce compared to those of retirement age, the retirement age will rise — predictably by 8.4 years by 2050. Economic disaster is so imminent in some nations, like Hungary, Denmark, Italy, and Singapore, that these countries have put incentives in place to encourage couples to have more, not fewer, children.

“To be successful we need a fundamental rethink of global politics,” Professor Ibrahim Abubakar of the University College London told the BBC. “The distribution of working-age populations will be crucial to whether humanity prospers or withers.”

It seems that groups like “One Planet, One Child” are more concerned with the future of the environment than the future of humanity.”

“One Planet, One Child” says it is “not dictating anyone’s family size” but simply “helping young couples make informed decisions.” It says, “The choice is theirs.” But the group’s advertisements are reminiscent of Chinese ads promoting the government’s one-child policy, which state, “Less births will be better for your child,” and “Fewer and better births, happiness throughout your whole life.” Eventually, the constant presence of those advertisements convinced Chinese young people that having one child was the right thing to do, not something they were being forced to do.

This over-population conversation has been long propagated by the Globalists elite through major funding campaigns related to abortion, contraception, euthanasia, and more.

China’s one-child-policy was perpetrated through regularly forced and often gender-selective abortions. TownHall in an article titled, “Abortion: Setting Themselves Up As God,” they explain the truly sinister way china inforced their one-child-policy:

A documentary titled “One Child Nation” is one of the most recent takes on China’s one-child policy imposed between 1980 and 2016 that was supposed to lift the nation out of poverty but ended up turning a cultural preference for boys into the widespread “gendercide” of millions of baby girls.

Others have explored the horrific implications of this policy. Nine years ago, The Economist provided the shocking statistic that 100 million baby girls had been aborted, killed after birth, abandoned or sold to child trafficking gangs who then sell the babies to foreigners for large sums of money.

Many writers describe the horror. Not as many honestly discuss how China got to the point where babies could be drowned in buckets of water; strangled with their own umbilical cord; tossed into dumpsters and waterways; or thrown, newly born, into public streets, where they were ignored by passersby and left to cry and die of exposure — that is, if they were not run over by vehicles. And then there were the forced abortions — even of full-term babies — and the brutal sterilizations of women.

The article then went on to argue that the reason for the Chinese Communist government enforcing these atrocities, is rooted in their attempt to “set itself up as God”:

No doubt there are plenty of historical, political and even cultural reasons why millions of babies were aborted, abandoned after birth or deliberately killed. But the overarching reason is that the Chinese government set itself up as God. There can be no authority higher than that of the humans in control, no objectives better than the policies they themselves dictate and no criteria by which the “goodness” of those objectives is independently assessed. The government has decided that X should be done, and, therefore, X is good and shall be done. Any means by which X is achieved is, therefore, also good — as long as the government says so. This is how the government could order the Chinese people to perpetrate inhuman crimes against the most innocent, and the Chinese people would do it.

We are so close here in the United States, too. So close that abortion activists can almost taste it.

The Bible tells us that in the last days there would be a “loss of natural affection.” A society is required to have this characteristic to be able to murder the weakest and most precious children among them. We are also told about the widespread deception and globalism that will permeate the end times.

Rapture Ready Published an article last October titled, “Heartbreak: How Climate Change is Manipulating Youth and Paving the way for a One World Government.” The author in the article explains how ‘Climate Change’ has become a religion and how this Climate Lie may be used by the Anti-Christ in his new world order:

The most religious people I have ever met in my life are avid environmentalists. They possess all the earmarks of passionate believers in a religion: They worship the earth; it’s the god to which they bow down and give their lives to protect. They follow the lead of self-appointed gurus and accept their predictions of doom as gospel.

The book of Revelation tells us that, during the tribulation, the antichrist will exert worldwide control through a totalitarian world order. It’s no surprise that Pope Francis, the most prominent advocate of a world government to combat the dire emergency of global warming, also works tirelessly to form a unified worldwide religion. The two may someday become inseparable.