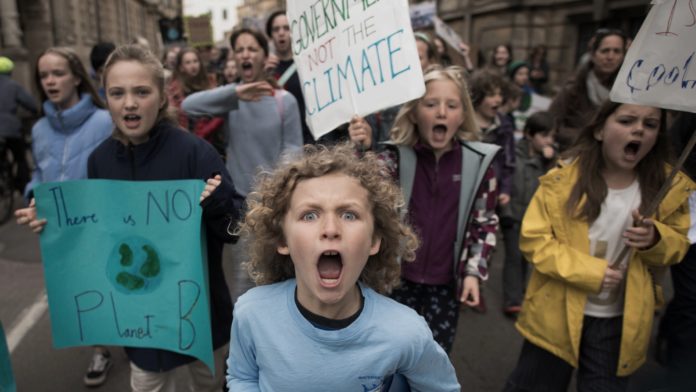 My wife and I recently watched the 1939 movie Confessions of a Nazi Spy. We sat awestruck by the similarities with Germany in late 1930’s and life today in the United States. The indoctrination of children and Hitler’s use of them to promote his socialistic agenda flashed like a giant billboard before our eyes.

How did Hitler get tens of thousands to go along with his wicked agenda to kill millions of Jews? He brainwashed the children and then used them to promote his brand of deadly socialism.

The climate strikes by school-age children during the past couple weeks fits perfectly with this pattern. My heart broke as I saw children as young as seven making signs that said “Let Kids Grow Up” and “We Deserve a Future” for their use in the “climate strike.” Children in the early years of grade school are far too young to form such opinions for themselves; others have brainwashed them into this foreboding culture of fear.

My heart breaks for the young children in our nation who feel the dread of believing this world will soon end unless the nations take drastic steps to prevent global warming. The most significant threat to their future, however, comes from the radical left who use them as pawns to promote an evil agenda.

Why do I make such a seemingly outrageous claim? Let me explain.

Climate Change Has Become the Pathway to the New World Order

The book of Revelation tells us that, during the tribulation, the antichrist will exert worldwide control through a totalitarian world order. What will cause the nations of the world to give up their sovereignty and rights to such a socialistic regime? I believe he will convince them that their only hope of survival is to join together against the threat of worldwide devastation via global warming.

We see this already at work. According to a September 1, 2019, Reuters report, “Pope Francis challenged governments on Sunday to take ‘drastic measures’ to combat global warming and reduce the use of fossil fuels, saying the world was experiencing a climate emergency.” The Pope went on to say, “We have caused a climate emergency that gravely threatens nature and life itself, including our own.”

On at least twelve different occasions, Pope Francis has advocated a one-world government as the solution to the dire threat of climate change. Politicians in the United States further warn that we only have thirteen years left to fix our out-of-control climate or face extinction.

The United Nations’ 2030 Agenda for Sustainable Development affirms that the world must unite under one banner to avoid the impending disaster caused by climate change. The seventeen goals of this platform urge the creation of a socialistic world order for the purpose of addressing social inequity but, more importantly, the global warming emergency. Eight of the seventeen goals relate to environmental issues and combating the dire threat caused by climate change.[i]

The Bible predicts a much different future for the planet than do those who promote fear and foreboding among our impressionable young. God’s Word assures us that the earth will survive the ravages of the coming tribulation and still support life when Jesus returns at its end to set up His kingdom.

Climate Change Has Become a Religion

The most religious people I have ever met in my life are avid environmentalists.

They possess all the earmarks of passionate believers in a religion:

They worship the earth; it’s the god to which they bow down and give their lives to protect.

They follow the lead of self-appointed gurus and accept their predictions of doom as gospel.

It’s no surprise that Pope Francis, the most prominent advocate of a world government to combat the dire emergency of global warming, also works tirelessly to form a unified worldwide religion. The two will someday become inseparable.

The good news is that the new earth of Revelation 21 will never “pass away.”

Only Believers in Jesus Will Forever Enjoy God’s Creation

God promises us a new earth, one that will never come to an end or wear out (Revelation 21:1). Sadly, those who worship this planet place their ultimate hope in something that will not and cannot last.

My heart also breaks for the climate activists because their religion dooms them to a judgment that is swiftly coming to the world they adore. Because they reject the Jesus of the Bible, they will miss out on what they long for the most, the time when God restores creation to its original glory and wonder. Instead, they will incur His wrath.

Those of us who know the Lord Jesus as our Savior will forever enjoy a fully restored creation. What we commonly think of as heaven, the New Jerusalem, will come down to earth during the eternal state. As followers of Jesus, we will live in the most beautiful city imaginable with unending access to the earth in all the glory God intended for it before sin entered the world.

I love the wonders of nature. I love the mountains, the Blue Ridge Parkway, the oceans, and mountain streams and lakes. And based on the promises of Scripture, I know I have just as much time ahead of me to enjoy the wonders of this earth as I did 66 years ago.

Because of Jesus, my opportunities to enjoy the wonders of God’s creation will never come to an end.

Current-day fear mongers tell us we only have 13 years before disaster strikes due to global warming. They tell us a one-world order is the only answer to escape the coming doom of life on earth.

The Bible, on the other hand, assures us this current earth will survive much longer than that; it will not succumb to climate change or global warming or any other catastrophe.

The Psalms tell us that, someday in the future, creation itself will rejoice at the return of its King, the Lord Jesus (Psalm 96:9-13; Psalm 98).

You see, creation knows it’s destined for a glorious makeover that begins with the Lord’s return (Romans 8:19-23). The wonders of God’s creation amaze me now. What will I see when God recreates it for the eternal state? I can only imagine the beauty and wonder of it all.

My heart breaks for children frightened by deceitful warnings of impending doom; and I pray, pray, pray they will soon realize their ultimate hope rests in their Creator. I pray they will put their trust in the One through whom all things came into existence (Colossians 1:15-17).

How do I know I can trust all of Jesus’ words found in the Bible? He rose from the dead on the third day, just as He said He would. The historical fact of the empty tomb assures me that Jesus will keep all His promises found in Scripture. He will never leave us or fail us in any way. He is coming again; He will restore creation to what it was meant to be.

Jesus said this, “I am the way, and the truth, and the life. No one comes to the Father except through me.” If you have not put your faith in Christ for the forgiveness of your sins, please do so today. You do not have much time to do so.

If you call out to Jesus and trust Him only for eternal life, he will hear your plea and give you eternal life. If you turn to the Savior, you will live with Him forever.

This current earth cannot do anything for you; it cannot console you in times of sorrow or encourage you when your path through life becomes treacherous. Nature cannot give you eternal life; only Jesus and Him alone can do that. Please call out to Him before it is too late.