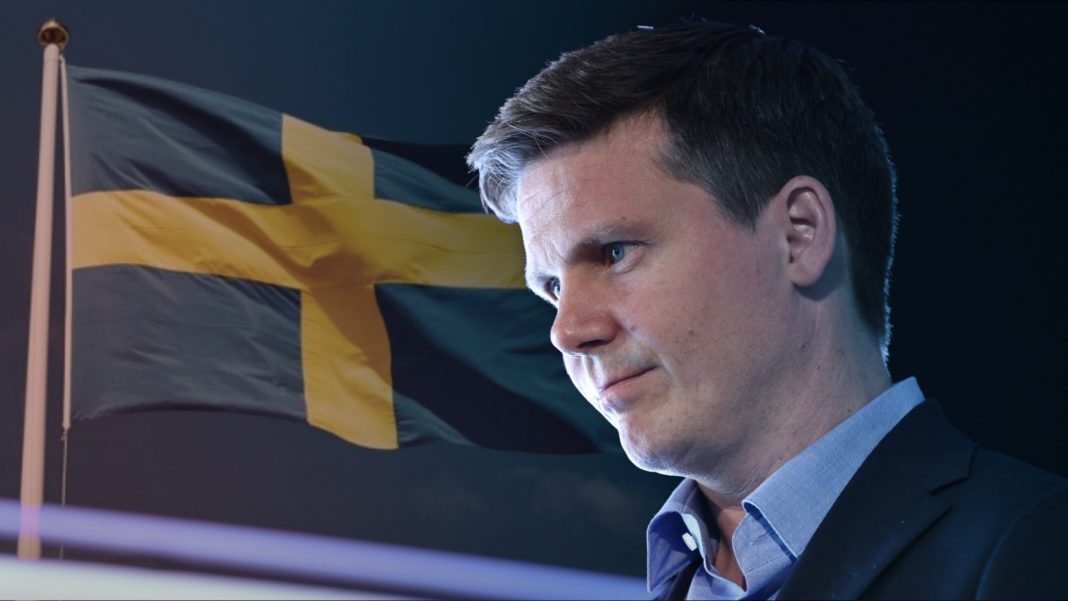 Sweden’s designated ambassador to Israel, a political appointee, publicly disassociated himself from support for Israel and opposed members of his party holding an event in the parliament in Stockholm with representatives of Prime Minister Benjamin Netanyahu’s Likud Party.

Erik Ullenhag, a former minister of integration and leader of the Liberal People’s Party, has been Sweden’s ambassador to Jordan since 2016, and will arrive in Israel in September.

He courted controversy last month when he announced his new posting by tweeting that he was appointed “ambassador to Tel Aviv,” as opposed to Israel. He later thanked people for congratulating him on becoming ambassador to Israel, using the country’s name.

Ullenhag has one other tweet mentioning Israel, and it is a denial that he supports it. In 2014, he defended his participation in a “Kippah March” – protests against attacks on people wearing Jewish symbols – by writing that he was protesting “against antisemitism, not in a manifestation of support for Israel.”

Sweden is one of the countries that is least friendly to Israel in Europe. The Liberal People’s Party’s MPs have a range of views on Israel, including some who support moving Sweden’s embassy to Jerusalem, according to recent Swedish media reports.

In 2010, some members of the party sought to hear an Israeli perspective in the aftermath of the Mavi Marmara incident, in which a flotilla meant to break the Israeli naval blockade approached Gaza. Israeli naval commandos boarded the ships, forcing them to dock in Israel. Armed passengers on the Mavi Marmara ship violently attacked the commandos and nine were killed.

President of the International Center for Public Diplomacy – Israel, David Hermelin, was head of the Young Likud Congress at the time, and planned, with other parties’ youth divisions and the now-defunct Public Diplomacy Ministry to send delegations to other countries to present Israel’s side of the Marmara story.

They originally planned to send Knesset members, Hermelin recounted on Sunday, but there was no budget to send MKs and most of the events were canceled. However, his interlocutors in Stockholm told him their event could not be canceled, and he paid for his own ticket to speak, instead.

Ullenhag, the Liberal People’s Party secretary at the time, opposed the event, specifically because the Israeli set to speak was a Likud representative.

Swedish newspaper Dagens Nyheter reported on “a split” in the Liberal People’s Party over the event, with its organizers lamenting that the party’s leadership tried to stop it.

Ullenhag denied trying to stop the meeting, but still expressed opposition to it.

“I think it would be inappropriate if it had been a big public meeting since Likud is not one of our sister parties,” he was quoted as saying.

Maria Halkiewicz, then a party activist who organized the event, and now spokeswoman of the Stockholm branch of the Sweden-Israel friendship association, said the obstruction attempt was highly unusual.

“I was never in this situation before or after the event. I didn’t understand at first that [the pressure] is about Israel,” she said.

Halkiewicz said that after an MP fought for the event, it was allowed to take place, but was relegated to a smaller room.

“When I heard Ullenhag will be ‘ambassador to Tel Aviv’…I understood they chose him because of politics,” she posited.

Hermelin said on Sunday that “we have good friends in Sweden… even in the Liberal Party there are people who support us.”

The former Likud youth leader lamented that “instead of bringing someone to connect to Israelis, Sweden is sending a political figure.”

The Foreign Ministry said in response to a query about Ullenhag’s status that there was “no significant reason to refuse” to accept his ambassadorship.

Ullenhag declined to comment, except to say that he is looking forward to assuming his posting in Israel.

The Swedish Foreign Ministry said: “Regarding our Ambassadors we use both the expression ‘Ambassador in X city’ and ‘Ambassador to X country.’ Sweden currently has, and aims at maintaining, good bilateral relations with Israel.