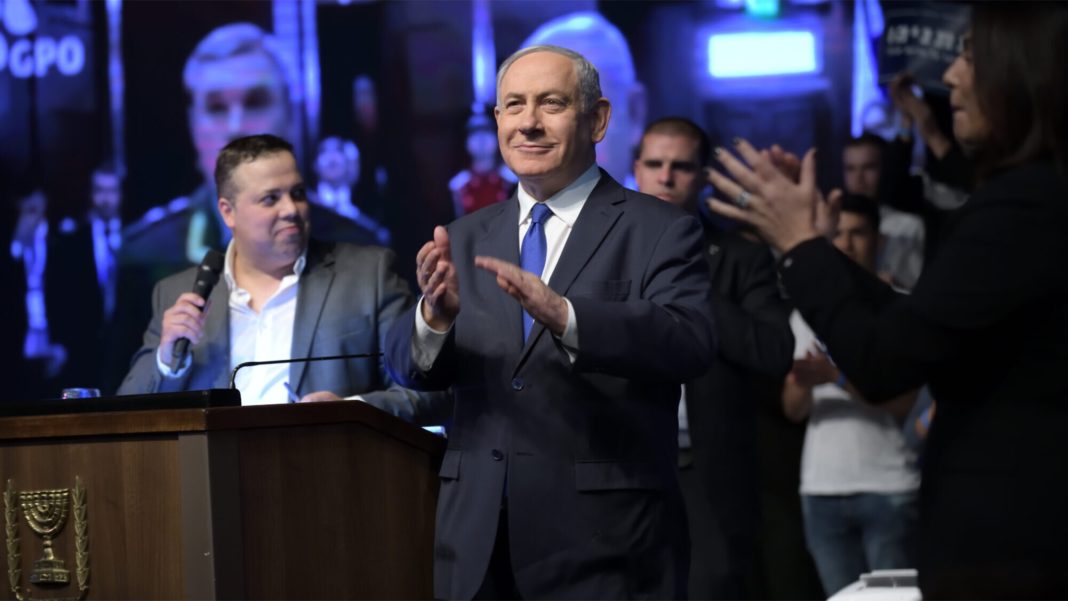 It is unclear if Prime Minister Benjamin Netanyahu will be able to form a government for the seventh time in his three-decade political career, according to exit polls on the three television networks Tuesday night.

Two of the three polls indicated that his bloc of Likud, Shas, United Torah Judaism and the Religious Zionist Party received enough support together with the Yamina Party of Naftali Bennett, who said during the campaign that he was ready to join a coalition with either political bloc.

Sources in Likud said Netanyahu would try to form a government as soon as possible. Bennett’s associates said they were “not in Netanyahu’s pocket” and joining his government was not a foregone conclusion.

Netanyahu declared on Twitter that he had won “a giant victory.” He called Naftali Bennett, who told him he was waiting for the final results and he would “act for the good of all the citizens of Israel.” Netanyahu also called the other leaders in his political camp and asked them to join a strong, right-wing government.

The turnout of 67.2% was a drop of 4.3% since last March’s election in which the turnout was 71.5% and the lowest of the four elections of the past two years.

Gideon Sa’ar’s New Hope Party won a disappointing 6 seats according to Channel 12 and KAN and 6 according to Channel 13. In a speech to his party’s activists, Sa’ar downplayed his defeat and asked to wait for final results. He vowed to not enter a Netanyahu-led government, though Likud officials said they would try to woo New Hope MKs.

After struggling throughout the campaign, Meretz easily crossed the 3.25% electoral threshold, according to the exit polls.

The Ra’am (United Arab List) Party however, did not cross according to the polls, though after counting more than 50% of the votes, they received 3.1% of votes, only 0.15% away from clearing the threshold. The Joint List won eight to nine seats, they found.

Gantz thanked his supporters for demonstrating their confidence in him.

“Starting tomorrow, I’ll do my best to unite the pro-change block,” he said. “And if we are forced to face a fifth round of elections, I will vigilantly protect our democracy, rule of law and security, because Israel comes first.”

The exit polls came following a tense day of infighting with both political camps. Yamina fought for seats with the Religious Zionist Party.

Gantz accused Lapid of sending out false statements about Blue and White and other satellite parties.

In a message sent by Yesh Atid, Gantz was quoted as saying that he was sure he already had six seats secured.

Blue and White responded that Lapid was disseminating fake news, saying that “it does not matter if Lapid ends up with 20 or 22 mandates, but it does matter if Blue and White does not cross the electoral threshold and will not be there to stop Bibi from running the country by himself.”

Gantz followed up by personally addressing the hit, saying “It’s bull****. Every vote is important. it is critical to vote for Blue and White, so that we can pass the electoral threshold.

What they are doing [spreading fake news] is absolutely irresponsible. To avoid this, go out and vote for Blue and White.”

Labor leader Merav Michaeli backed up Lapid, saying that “the smallest parties are no longer in danger, and therefore the time has come for voters to follow their hearts and cast ballots for who they believe in.”