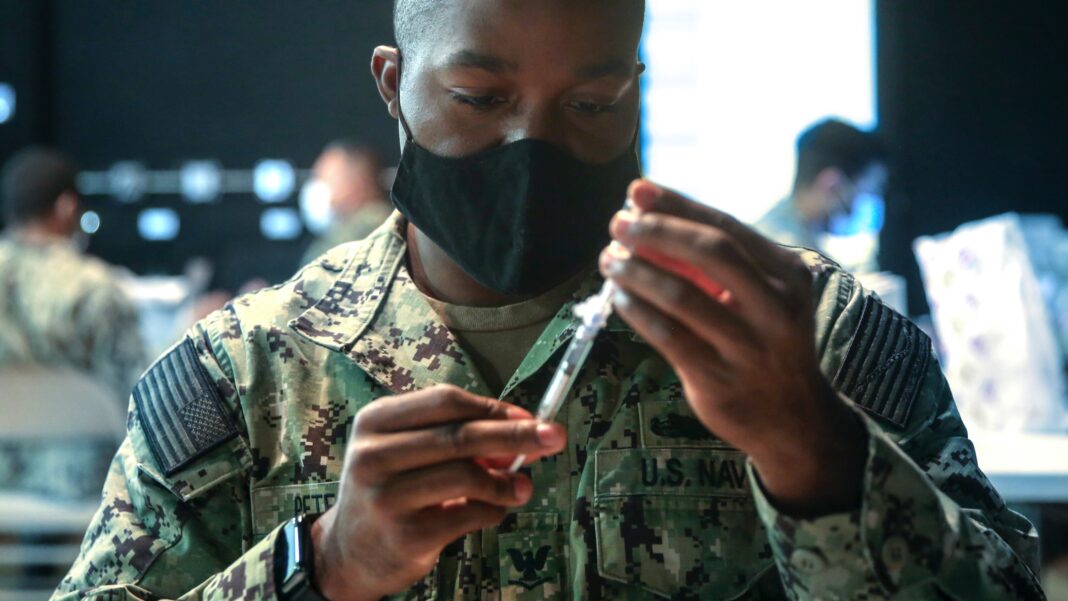 Dozens of U.S. Navy SEALs and Special Warfare Command crewmen are taking legal action against the Biden administration and the Defense Department for their refusal to grant religious exemptions to the COVID-19 vaccine mandate.

Attorneys with First Liberty Institute filed a federal lawsuit on behalf of 35 service members on Tuesday.

Secretary of Defense Lloyd Austin announced in August that all U.S. troops will be required to get the COVID vaccine – a move that is supported by President Joe Biden.

“The fact that the government has not granted a single religious exemption from the vaccine mandate shows that the Biden administration is engaged in an attempted ideological purge,” said Mike Berry, General Counsel for First Liberty Institute. “Forcing a service member to choose between their faith and serving their country is abhorrent to the Constitution and America’s values.”

Berry continued, “After all these elite warriors have done to defend our freedoms, the Navy is now threatening their careers, families, and finances. It’s appalling and it has to stop before any more harm is done to our national security.”

When one SEAL informed his superiors that he planned to seek a religious exemption from the vaccine, his commanding officer told him that he would have to surrender his Special Warfare pin.

And a new directive issued by the Navy states that if a SEAL declines the vaccine, the military could attempt to recover money that the government has spent on his training.

First Liberty points out that SEALs dedicate years of their lives in training to become the most elite fighting force. Yet, the Navy is willing to oust them or force them to repay the cost of their training simply for refusing a vaccine.

The lawsuit outlines that multiple plaintiffs have religious objections to getting immunized against COVID-19 because “the vaccines were developed, tested, or produced using aborted fetal cell lines.” Those refusing to receive the vaccine “hold the sincere religious belief that all life is sacred, from conception to natural death, and that abortion is the impermissible taking of an innocent life in the womb.”

In addition, many of the SEALs have already contracted and recovered from COVID-19, while some have had antibodies tests showing that they acquired natural immunity.

Berry urges all service members to “stay firm, stay strong in your faith. Continue to exercise your rights and hopefully our lawsuit will be successful.”

The dismissal of scientific data regarding natural immunity, other related health issues has demonstrated that the push for total vaccine compliance is agenda-driven and not driven science.

This point was underscored by Senator Ted Cruz, who said that vaccine mandates are “not driven by the science,” but are driven by “the momentary politics.”

“If you have a reason why medically it’s a bad idea for you to take the vaccine, well, their view is tough for you,” Cruz said. “One example — Dr. Fauci and the CDC and the Biden administration repeatedly ignores natural immunity. It ignores the immunity of tens of millions of people who’ve had COVID. That’s politically inconvenient, so they pretend it doesn’t exist.”

A study out of Israel found that those with natural immunity (those that have recovered from the virus previously) are 27x more protected from becoming infected by COVID-19 than those vaccinated.

Furthermore, a study out of the University of California showed that young men may be particularly at risk of the vaccine’s adverse effects. The study showed that teenaged males are 7x more likely to develop heart problems (cardiac myocarditis, heart inflammation, and chest pain) than to be hospitalized from the virus itself.

“One of my big problems is our vaccination of the military,” he explained. “I was a 10-year Navy surgeon so I have Navy people and Army people calling me. There were only 20 deaths of all the active duty in 2020 for Covid, in all the services put together. They have a big epidemiological base and they can find out exactly what’s going on. There were only 20 deaths and we are vaccinating everybody. We’ve already had tumors and we’ve had 80 cases of myocarditis, which has a significant five-year mortality rate, I think it’s 66 percent… So, with the vaccination program we have ostensibly killed more of our young active-duty people than Covid did.”

Religious exemptions, as the above article states, are also being dismissed.

Harbingers Daily reporter, Brandon Beckham, recently explained in his article, “Clash Over Vaccine Mandates & Religious Freedom Gains National Spotlight,” that it is “critical” that Christians stand strong for their religious freedom in the face of such mandates.

“For many Christians, rejecting a vaccine they view as violative of the sanctity of life is necessary to maintaining a clear conscience before God,” Beckham stated. “As Pastor John MacArthur writes, ‘Paul [the Apostle] spoke of the importance of a clear conscience (1 Timothy 3:9) and warned against anything that would defile or muddy the conscience (1 Corinthians 8:7; Titus 1:15).'”

“The clash between COVID-19 mandates and constitutionally protected religious freedom has revealed, for many Christians, evidence of an increasing secularization in society,” Beckham warned. “This includes a trend toward dismissing and demeaning religious values and replacing them with secular ethics.”

“The suppressing of a pure conscience, before God, is exactly what we are witnessing,” he wrote. “Replacing biblical values with secular ethics, to justify mandating COVID-19 vaccines, is an ungodly attack on conscience and biblical truth.”

“Now, more than ever, it is critical for Christians to stand for biblical truth and maintain their convictions,” he added. “In the face of society’s increasing trend toward secularization, it is important to pray for those being forced into First Amendment legal battles, as they seek to maintain a pure conscience before God by defending their religious beliefs.”